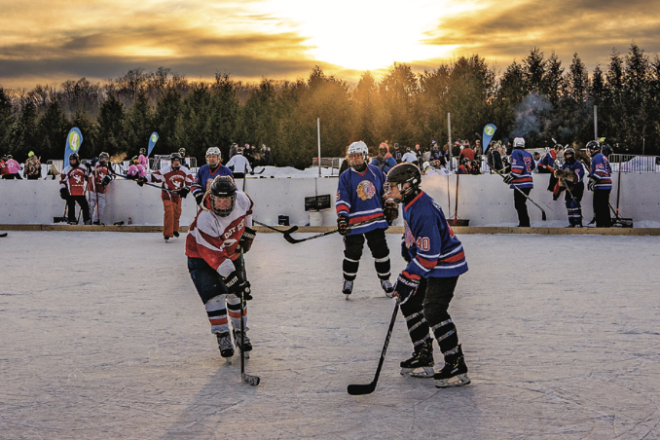 There was more than just hockey during last weekend’s Door County Pond Hockey Tournament – there was also lots of nostalgia.

To be sure, there was hockey. Plenty of hockey: 47 teams with approximately 300 athletes. More than 150 games. Eight divisions. The games began at 8 am and concluded late that evening in a picturesque setting under the stars and temporary lights.

But in addition to all the hockey, there was also a lot of reminiscing.

“Outdoor hockey is how most of us began,” said tournament director Brian Fitzgerald, who played his youth hockey on frozen ponds in the St. Paul, Minnesota, area. “We learned the game on ponds. It was a big part of our childhood.”

“This tournament takes us back to being a kid,” agreed Carl Ekstrom, who was raised near Stockholm, Sweden, and was a member of the Fitzgerald Freighters of Green Bay. “Pond hockey was popular, even in Sweden.”

The players’ memories of childhood hockey are strikingly similar. They recall carrying their skates and sticks and walking a mile or more to the neighborhood frozen pond to play hockey. All day.

Often, a bonfire would burn, and the players would warm themselves in between games while sitting on a log or tree stump. They would quickly choke down a sandwich and a gulp of hot cocoa from their thermos while hurriedly selecting new teams for the next game.

“If you showed up, you played,” said Mario Giovannini of the Fluffernutters team of Plainfield, Illinois. “Your skill level wasn’t important. There were no substitutions. It’s the only way to develop your skills.”

“If you could skate and stick handle on a frozen pond, you were considered a hockey player,” said Brent Bandholz of the Milwaukee-based Old Redhawks. “We played in heavy snow or high winds or subzero temperatures. And we loved  it.”

The players hoped for bitter cold on the day of the Door County Pond Hockey Tournament this year, and they got it. It was 3 degrees F when the first game began, and the high temperature of the day was in the low teens.

“Call us crazy,” said Austin Freeman of Brymer’s Boys from Lake Country, Wisconsin, “and you’re probably right. The colder, the better; that’s why we play.”

Outdoor hockey is a different game than what’s played indoors because the ice surface is often rough. In addition, the rink dimensions are approximately half the size of an indoor rink.

The rules are different, too. There are only four players on the ice for each team. Slap shots are not allowed. There’s no icing or offsides. There are no goaltenders or nets, so a goal is scored when a player slides the puck through a one-foot opening cut into a long piece of wood placed at each end of the playing surface.

Finally, far different from college and professional hockey, there’s no rough play such as body contact and checking.

“The surface is too small to allow it,” Fitzgerald said. “Outdoor hockey is all about the skill set the sport demands.”

The skill level of players on the teams at the Door County Pond Hockey Tournament is considered to be “overall, high,” according to Fitzgerald. Some team members are former Division 1 college players, and one year, the Chicago Blackhawks were represented by an alumni team.

“Every team wants to win,” said Mikah Wheeler from the Green Bay Zambronies. “There are some very good players. But it’s also about the beer and the vibes and the outdoors. It’s a fun day. And the tournament is very well organized.”

Fitzgerald said that the long-term weather forecast will be the determining factor in years to come about whether the tournament is played on Kangaroo Lake or at the Sister Bay Sports Complex. The decision must be made weeks ahead of the event. He added that the preference is always the lake because that’s “true pond hockey,” but the most logical decision may usually turn out to be the rink in Sister Bay.

Championship Teams from Each Division