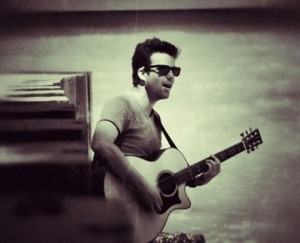 Todd Carey will perform songs off his new album at The Hitching Post on May 25. Photo by Lisa Walsh.

“Door County is everything for me in music,” says Todd Carey, as he drives through the busy streets of New York City – the Midwest native’s home for the past four years. “I’ve written everything I care about musically there. I learned to play music in Door County! In the summers I would play guitar and sing for my friends all night at a bonfire on the beach.”

Carey will return to the Door Peninsula on May 25 to perform at his “favorite place to play music,” as he describes it, The Hitching Post in Valmy. “It’s so comfortable to me. I had my first legal beer there,” he laughs.

Growing up near Chicago, Carey – a singer/songwriter who just landed a record deal (to be announced by the label soon) – enjoyed spending summers at his family’s cabin on Whitefish Bay.

“I grew up on the beach there and The Hitching Post was just down the road,” explains Carey. When his friend Mark bought The Hitching Post in 2006, he decided to feature Carey for a New Year’s Eve performance. “It was the first music event [for The Hitching Post] since the 40s or 50s,” says Carey, who has played there periodically since relocating to New York City.

“Everyone is so supportive [at The Hitching Post],” says Carey. “I get to try new material.”

The diverse musical influences of the new album reflect Carey’s diverse taste in music. “I grew up really into the Grateful Dead,” says Carey. “I liked jam bands – like Dave Matthews and Phish – and grunge music when I was a teenager in the early 90s. I studied jazz in college and things came full circle. I just love a great song.”

While in the county for a short time, Carey will try to take in some of his favorite Door County activities: bike rides to Cave Point County Park, yoga at Junction Center, and hanging out with old friends at The Hitching Post.

“When I think about Door County, my heart is full,” says Carey. “It’s the place where I want to be.”

The Hitching Post is located at 4849 Glidden Drive in Valmy. Carey will perform two sets, beginning at 10 pm. For more information call 920.743.5753 or visit http://www.thehitchingpostvalmy.com.

To learn more about Todd Carey, visit http://www.toddcareymusic.com. Mark your calendars, Carey will also return to The Hitching Post for a performance on July 6.