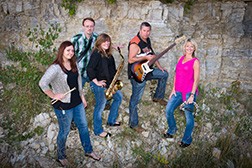 In the mid-2000s, Sturgeon Bay resident Amy Stanelle knew she wanted to lend her smooth, energetic vocals to a band, some way and some how. Raising four teenagers at the time, she wasn’t quite sure how it would happen.

But after landing a solo gig in an Appleton production and connecting with the pit orchestra director, one musical introduction led to another and she soon found herself behind the mic and in front of the crowd, leading the newly formed Fox Valley-based Mad Cats Band.

Since then, the variety band’s roster has been as varied as its set lists, with no less than a dozen people having been attached to the Mad Cats Band. In fact, Stanelle is its only original member.

Today, the five-member band includes Stanelle on lead vocals, Rusty Thunderbass on bass, Jeremiah Jams on guitar and vocals, Chelsa Baum on drums and vocals, and Emily Karl on saxophone and violin.

Putting their varied musical talents together, Mad Cats Band plays everything from contemporary Top 40 pop to country and everything in between.

“We are some pop, some rock, some blues, some country,” Stanelle says. “We try very hard to mix it up so that in any given audience, you’re able to find at least a few songs that you like and that you know.”

When selecting music for any given performance, everything comes down to the band’s main criteria, “danceability.” If there is one thing the band members can agree on, it’s the importance of propelling its audience to get out on the dance floor and show off their moves, no matter how much embarrassment might ensue.

And if some people are too self-conscious to do anything more with their bodies than toe tap to the beat, you can bet they’ll still be bellowing out the lyrics to “Hit Me With Your Best Shot” with Stanelle behind the mic.

It all has to do with the familiarity of the five decades of music the band pulls from, with its strongest influences dating back to the ’60s and including Grateful Dead, ’80s hair bands, rock, dubstep and pop.

“We try to mix it up quite a bit,” Stanelle says.

Further supporting the band’s mission to bring infectious beats to its audiences’ ears is its state-of-the-art BOSE sound system, with three compact towers giving power and sounds to all of its equipment. It’s a great addition to a band that puts all it’s got into performing up to 40 songs for its three-hour shows.

“We have a lot of energy and we have a spectacular time playing together,” Stanelle says. “We genuinely enjoy each other.”

Though the band’s typical year includes two performances a month, it has enjoyed a surge of activity this year, particularly in Door County. The band is now scheduling two nightly gigs every other weekend and if its name sounds familiar to anyone “in the know” of the Door County music scene, it should – in 2014 alone, the band has performed at Jazz on Jefferson Street, Mojo Rosa’s during Pumpkin Patch Festival in Egg Harbor, Kitty O’Reillys Irish Pub’s St. Patrick’s Day celebration, and of course, multiple appearances at Stone Harbor Restaurant and Pub. The Sturgeon Bay pub will welcome the Mad Cats back for a show Saturday night.

Though the band is booked for countless gigs throughout the year, its members are always sure to perform at least two fundraising performances annually – one to support the battle against breast cancer, and another that is determined each year.