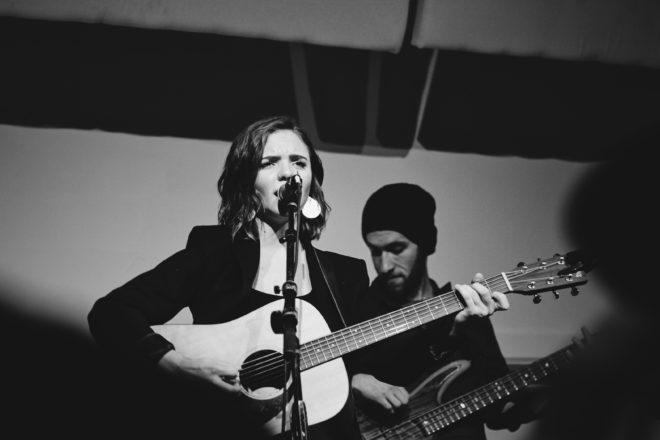 You can experience Popour’s vulnerable work for yourself at the Door County Brewing Co. Taproom & Music Hall on Feb. 22, 7 pm. Poise & Ivy – Popour’s duo with Sam Luna – will open; she and her full band will follow. Photo by MaKenzie Aliesha.

Songwriting techniques vary from artist to artist, and for 21-year-old R&B and soul artist Tae Popour, vulnerability lies at the forefront. Ahead of her Feb. 22 show at Door County Brewing Co., we wanted to find out why.

Popour started her journey with music in Green Bay at the age of 12 or 13, performing at private parties as a singer with accompaniment. She tried piano lessons at 14 or 15 but decided she didn’t like the instructional format. Instead, she picked up a guitar and began teaching herself using the internet.

Later she attended both the University of Wisconsin-Milwaukee and UW-Green Bay for arts management and public speaking because she thought they were subjects that would help her to achieve what she really wanted to do: music.

But the music vibe at those schools was too theater- and performance-driven. Popour was more interested in things such as music entrepreneurship.

“When I went to these schools, I really could not find the arts community that I saw myself fitting in,” she said, so she left to become a full-time musician. To her, that means making music her job completely, putting her entire self into it. When she’s not writing or playing, she’s working on her website, researching cities, booking shows and promoting herself.

“In a way, you can never escape your job because it is your lifestyle, but I chose that, and I wouldn’t ever change that,” Popour said. “Times can be tough, but I never worry because I signed up for that. A really close friend said once, ‘If the birds can eat, so can we.’”

In May 2019, she decided to start recording music. It was kind of a last-minute decision because she had intended to go on a month-long tour at the time. But, the process ended up going smoothly. She already had the songs picked out and arranged for artists – whom she had met in the community and others who had been recommended – to provide the instrumentation.

“I was so ready to fight any chaos that would come,” Popour said.

She recorded the album at an old bank/opera house called The Heist – a cooperative space and venue in Ripon, Wisconsin, where she lives. It was finished at the end of November.

Popour released her debut album, What Love Is, on Jan. 1, 2020, and it’s just what it sounds like: an open-ended examination of what love is, what it means in her life, and what it might mean for others.

She said the album came from a place of intense emotion and revelations in her life. Topics such as domestic abuse and leaving relationships surface in the lyrics, but so do a new journey with self-love and entering new relationships. It’s about putting better love out into the world, she said.

“My whole entire thought when I approach a song is [that] I try to be as vulnerable as possible because the people that you show that to will likely follow,” Popour said. “Creating a wave of that – it sounds cheesy, but – could make the world a better place.”

Love on Holiday and the other music collaboratives in Sturgeon Bay played a large part in her songwriting process. The album’s title track, “What Love Is,” was written during Love on Holiday as a solo side project, along with “How We Love,” co-written with Eric McFadden; and “Get Back What You’ve Been Giving,” co-written with Eric McFadden and Jamey Clark.

About finally having material out in the world, Popour said, “It’s such a relief, and I feel like my entire career so far has been working up to that.”

It’s also been a somewhat shocking experience to hear people expressing their opinions about her work, she said. It’s been a cool experiment.

“Sometimes I’ll get a random message from a person saying, ‘Hey, this really helped me through today. I was feeling this way, and these are my thoughts about it,’ and it offers me a new perspective about my own music sometimes,” Popour said.

You can experience her vulnerable work for yourself at the Door County Brewing Co. Taproom & Music Hall on Feb. 22, 7 pm. Poise & Ivy – Popour’s duo with Sam Luna – will open; she and her full band will follow.