Getting to the water at Porte des Morts Park in Liberty Grove is tricky – especially for those carrying equipment. The water is at the bottom of a steep bluff, and getting to it involves a challenging climb down.

The climb inspired a group of divers to come up with a solution that would make the shore more accessible. 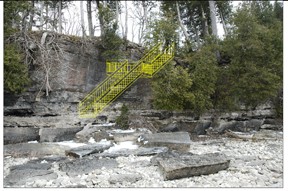 “There should be a staircase there,” said John Touscany, secretary of Neptune’s Dive Club.

They call it the Porte des Morts Staircase Project, and it’s already underway. Neptune’s Dive Club received permission from the Liberty Grove Town Board to begin fundraising for the project.

“We didn’t feel as though the town was in the position to pay for the staircase, and if they wanted to get the funds together then we would support it,” said Frank Forkert, town board supervisor. “We’ve said yes, and they’re now getting organized to find some money. I think it would be nice to have a staircase, and I think it’s feasible, and they just have to work ahead.”

Porte des Morts, which means “the door of the dead” or Death’s Door in French, is a popular spot for divers because of the rock formations and shipwrecks below the surface of the water. The park overlooks the passage between the Door Peninsula and Plum and Washington Islands, where lots of ships have wrecked. 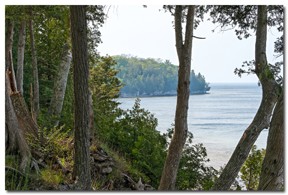 A view of the water from Porte des Morts park. Photo courtesy of Dennis Mullen, www.dennismullen.com.

But it wouldn’t just be shipwreck divers who use the stairs, Touscany said. He said swimmers, kayakers and stand up paddleboarders would use them too, and anybody with homes nearby would get public waterfront access.

Brian Bangert, vice president of Neptune’s Dive Club, said he doesn’t think the park will become too busy once the staircase is built because the property is hidden from busy roads.

“People are always interested to get to the water’s edge, and I think if a park gets you down the face of a bluff like that it would be an interesting experience for people to have,” Forkert said. “I think the town should do what it can to let it happen.”

To raise money, Touscany plans to sell space on the stair risers – the area between the steps – to supporters for $1,000 apiece. He guesses it will cost $40,000 to $50,000 to build the stairs, and said he’s already received some donations.

Touscany and Bangert said their club members want to be good to the communities they visit and dive and want the stairs to be another way to attract visitors to Liberty Grove.

“Most of us are outsiders to Door County,” Touscany said. “We want to take care of the shores, we don’t want to do anything to jeopardize our ability to shore dive.”