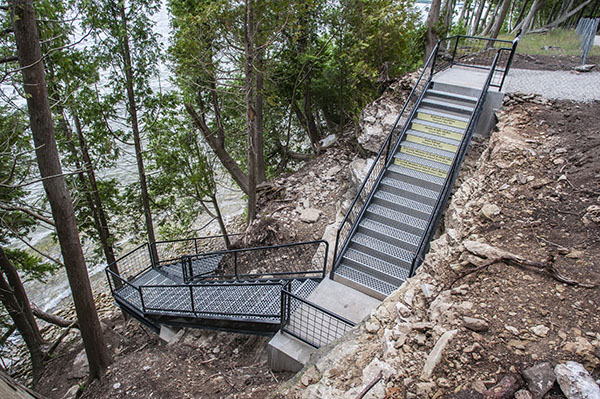 To combat the erosion, the Liberty Grove Town Board is looking to place stone around the base with proposals from Death’s Door Marine and Hocker’s Excavating. The board has an emergency permit from the state’s Department of Natural Resources to do this so the area surrounding the base doesn’t completely wash out, Kalms said.

“The structure would fail if that happens, so we’re trying to get that done as soon as possible,” he said.

A significant ice shove in the spring could damage the staircase, said board Chair John Lowry said. He projects the board will take action in September.

Liberty Grove has been working with Door County Broadband (DCB) to expand internet coverage by placing three grant-funded towers, but at this time, DCB has placed no orders for necessary building equipment, Lowry said. Finding locations has been difficult because of people backing out at the last minute and negotiations falling through.

At an Aug. 7 meeting, the Liberty Grove Town Board discussed two possible locations. The first is a former dump site off County ZZ, which the town owns. It would be an ideal spot, but the board needs to consult with the DNR in order to move forward. The north fire station in Ellison Bay is looking like another good option, Lowry said.

Kalms said a Sand Bay Road location was being considered, but at a July 18 meeting, Technology Committee Chair David Studebaker reported that engineering issues have arisen because of the site’s proximity to the shore.

The board will continue to search for appropriate locations.

One example of the restrictions is that the Federal Communications Commission (FCC) doesn’t regulate towers that are lower than 100 feet, but Door County requires FCC approval for towers lower and higher than 100 feet, which incurs unnecessary costs.

Such restrictions are causing people to build individual towers rather than sharing them, Schuessler said. The situation is also hurting the sale of properties because buyers don’t want homes where broadband isn’t available, and a new tower can cost $10,000 or more.

DCEDC is collaborating with experts to increase the capacity and reach of broadband and hopes to begin proposing recommendations by Labor Day.