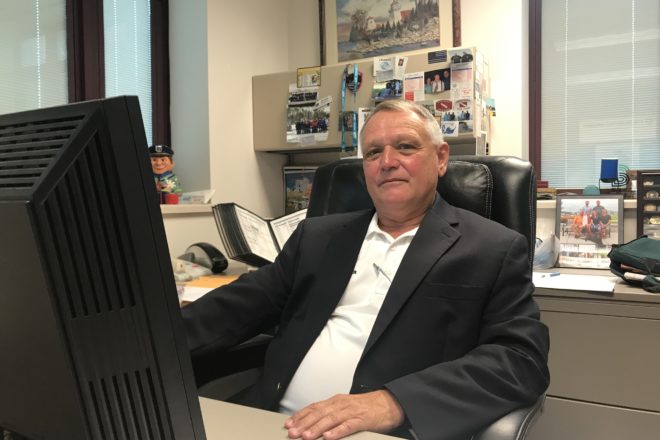 Arleigh Porter, police chief of the Sturgeon Bay Police Department, will reach only 64 years in November. That may be younger than many when they retire, but it’s getting up there for a police chief with 40 years on the job, he said. His last day will be Oct. 2.

“You can retire with a pretty good pension far earlier,” he said, “so I’m not [at the] normal retirement age. The love of this community makes it very easy to be chief here, and my command staff.”

It’s time now for him to “ride off into the sunset,” he said, from a position he’s held since 2010, when Chief Dan Trelka left for Waterloo, Iowa.

“I was shocked,” Porter said. “I thought I could ride out my career as number two. And there’s a lot to be said about being number two in any organization.”

He served in that second-in-command captain position for 10 years, and prior to that, he spent two decades as a detective. It’s those early years of fitting puzzle pieces together to solve crimes that he turns to first – particularly, a cold-case homicide involving a small child.

“The story didn’t make a lot of sense,” he said. “The father presented in the emergency room in 1976 or 1977 and said the child had the head stuck between the headboard and mattress frame on the bed. The child couldn’t breathe and died. The police at that time were suspicious enough of the father’s story that they took the bed frame and put it in the garage and left it.”

The case involved an exhumation of the child’s grave before the father was arrested and the cold case brought to a close.

“I’m a young man, probably only 28,” Porter recalled. “This was a fascinating step for a young guy to have been involved in. I’ll never forget it.”

Porter has so many stories about his years in law enforcement that almost 90 minutes can pass just listening to him before you realize you’re supposed to be asking some questions. Like about his first-ever case solved with fingerprints – a burglary of a west-side church – back when the database was just a file of three-by-five paper index cards.

“You had to develop a suspect and hope their fingerprints were on file,” he said.

Porter chalked up a lot of his solved cases to “dumb luck” – something his second-in-command refuted.

“That man had a talent for investigations,” said Captain Dan Brinkman, who’s been with the department for 33 years. “He was sought after by other departments to interview and interrogate suspects. That’s how good he was.”

Porter didn’t have a career in law enforcement in mind when he moved to Door County from Antioch, Illinois, and got a job at a dive shop in Gills Rock.

“I was right out of high school,” he said. “I had no clue. The Vietnam War had just wrapped up, so I didn’t join the service. I didn’t go on to college. I didn’t know what the hell I wanted to do, to be honest. I loved Door County.”

Eventually, he became a paramedic with the Door County Ambulance Service, living in an apartment above what’s now Wilkins & Olander in downtown Sturgeon Bay. The ambulance service shared space on 5th Avenue with the Sheriff’s Office and the Sturgeon Bay Police Department.

Police Chief Howard Larson gave Porter a shot when he applied for a position. When Porter traded in his paramedic’s uniform for a patrol officer’s uniform and walked into the same building to report for duty in 1980, he set about protecting and serving a city shaped by thousands who were employed by the city’s thriving shipyards.

“So we’ve got a much different waterfront down here in Sturgeon Bay on the east side [back then] that’s employing 3,500 hardworking men, a lot of [whom] relocated here from other places so they could work,” he said. “Hardworking, hard-drinking, hard-fighting people. A different environment.”

Porter spent only 15 months as a patrol officer before being promoted to fill the new sergeant investigator position created by former Police Chief Mike Nordin. Porter credited Nordin for molding the department into what it is today and had high praise for the man whose career and life were cut short by interstitial lung disease.

Nordin’s daughter, Colleen, was only a teenager at the time. She’s now running for her second term as Door County district attorney, having won her first term in 2016. Nordin said Porter has taught her over the past few years about leadership and the importance of developing professional and community partnerships.

“I have had the privilege of knowing Arleigh Porter my entire life,” Nordin said. “When I was elected district attorney, I knew that because I have known him for so long, working with Arleigh would come easy. What I did not realize was how significantly that relationship would help enhance my ability to do my job.”

Brinkman said Porter made connections everywhere around the country, many of those cultivated during his days training at the FBI National Academy. Networking and developing partnerships was part of the job, Porter said – whatever it took to get the equipment and training his department needed.

“You can become both personally and professionally isolated up here,” Porter said. “There’s other ways of doing things. I need to get out of Door County and attend training and talk to my peers who may be doing things differently that we can adapt here.”

The relationship that police officers have with the community has changed during his four decades on the job. He said the warrior mentality is a thing of the past. Today, Sturgeon Bay’s crime rate is below both state and national averages, and fighting crime is only a portion of what officers do.

“‘Us versus them’ is long gone,” Porter said. “You’re not going to be successful with that. It’s a partnership. That partnership has become even more critical in the past six months. And we have that here. I’m convinced of that.”

Challenges that he’ll be leaving to the next chief include the regular calls his officers respond to involving people who are experiencing mental-health crises, whether they take the form of violent or self-destructive behaviors, substance abuse or diseases such as dementia that are increasingly afflicting Door County’s aging population.

“This is something police officers do because that’s who gets called,” he said. “It’s not the case workers leaving their office to respond.”

This final year of his career is unlike any of the previous 39. He’s never seen summer crowds so large or water temperatures so warm while he’s navigating local waters in his 27-foot Formula powerboat. And of course, COVID-19 has affected everything, teaching him to lead a department during the “slowest-moving emergency we’ve ever had to deal with.”

This year also delivered one of Porter’s proudest moments when he helped the local Black Lives Matter group plan a peaceful demonstration of some 250 people in downtown Sturgeon Bay that was pulled off with zero incidents.

“That was a very proud moment for the community,” he said.

Porter sold his Sturgeon Bay house a few weeks ago and moved 12 miles south with longtime partner Carrie Dossen and their two Labrador retrievers. When he packs up his office and turns off the lights for the last time Oct. 2, he said he’ll be leaving behind a modern, well-equipped, well-trained police department.

“I would like to be remembered as fair,” Porter said. “And what I’ve tried to do is get the officers the equipment and training that they need to be the best they can be out on the street. I think I’ve accomplished that.”