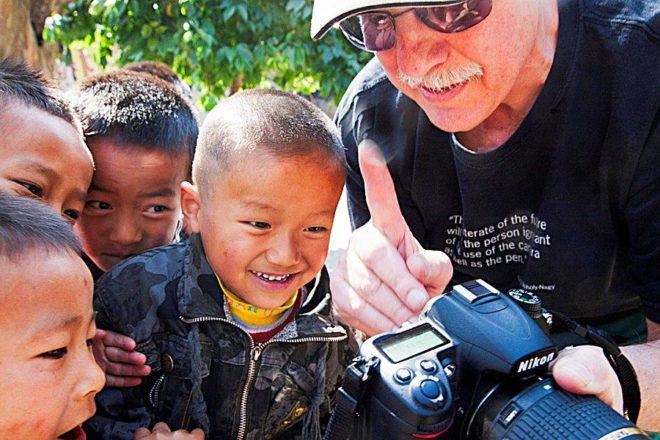 Photographer Dennis Connolly during a 2012 trip to China.

Connolly is principally self-taught, though he has had the good fortune of receiving instruction from several imminent Door County photographers to include Dan Anderson, Suzanne Rose and Leonard Quartetti. Connolly said, “I am indeed fortunate to have had the honor of witnessing and learning from these highly accomplished, knowledgeable photographers, who continue to motivate me.”

Connolly’s photographic journey began at about age seven, when he was given his first used Brownie camera. “I first began recording family gatherings and actually used the camera as a wall between me and my rambunctious uncles, but now the camera is a vehicle which I implement to connect with people, both with the featured subject and with the viewers of the finished photograph. My hope is that the viewer will feel an emotional response,” he said.

Locally his work has been juried into the Miller Art Museum and the Hardy Gallery, and has been featured at the Meadows Gallery.