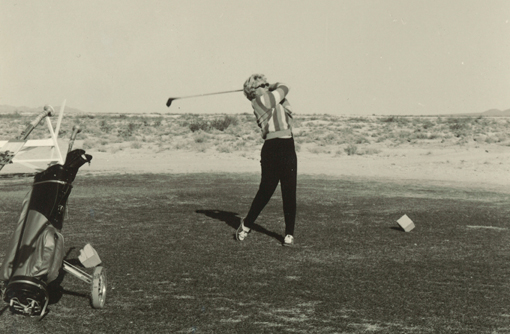 As the much-anticipated spring begins its seasonal assimilation on Wisconsin’s premier peninsula, local athletes and outdoor enthusiasts prepare for recreational activities on the recently thawed lake and park grounds.

None are happier than Mary Aiken, who can finally break out her favorite TaylorMade driver and Callaway iron on the lush greens of Door County’s alluring golf courses.

For Aiken, a local born and raised in the county, spring is nature’s invitation to shake off the winter rust and once again participate in the timeless game of golf. 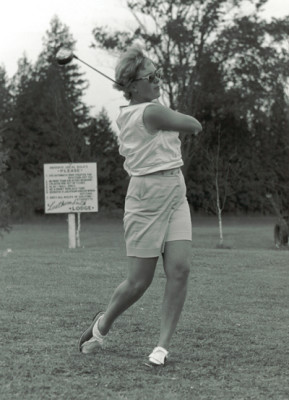 “I usually play four to five times a week in the summer,” says Aiken. “I play in a league at Alpine on Tuesday morning and a league at Idlewild on Wednesday afternoons.”

The game of golf has roots in the very early years of Aiken’s life. She initially began play at age nine with a bag of clubs given to her by her father. Her zeal for the game started at Leathem Smith Lodge in Sturgeon Bay. She was hooked on the game after taking a few group lessons with children her own age. At a young age, she was so inclined toward golf that she once played 63 holes on a nine-hole course at Leathem in one day.

Armed with her junior membership, something that was never wasted, Aiken would, “throw my bag over my shoulders and ride my bike the two miles to the course and go round and round nearly every day of the week, except when I picked cherries for three weeks.”

Her stellar and consistent play did not go unnoticed. When she was 12, 16-year-old John Purves, a neighbor and family friend, played with her at a match play event. Purves, a very talented golfer himself, saw the potential in Aiken and told her to skip playing in the junior division at an Alpine tournament and to join the ladies tournament instead. It proved to be a smart move as she proceeded to take the A flight (just one flight below the championship) at age 12.

She continued to play throughout high school and moved to Las Vegas at age 21. She joined a public course and was the club champ for her five years in Vegas. Similar to Purves’ observations nine years earlier, the club professional at the course saw professional talent and offered Aiken free training during the day if she could find a night job. It was an interesting offer but she chose to keep her day job and continued to play golf without the intention of joining the pro circuit. 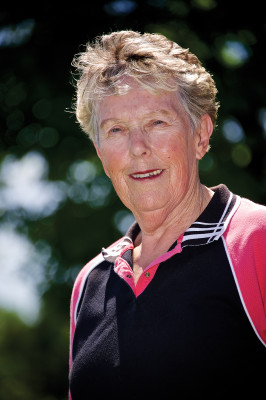 Aiken didn’t have the desire to bear the stress and burden of training to join the pro circuit. Tempting as it was, she says training on the tour was “too much commitment” and that it’s “a real job to be a professional golfer.”

While turning pro was not an option she wished to pursue, the game continued to be a high priority throughout her adult life. Aiken played weekend golf for most of her life, but her play increased to four to five times a week upon retiring at age 62.

Retirement opened doors to allow more time for tournament play. Her first state tournament, the 1996 Wisconsin Women’s Public Links Golf Association (WWPLGA) Senior Tournament, was held at her home course, Cherry Hills Golf Course. Despite the initial nerves, Aiken entered the tourney and won. This was the genesis of what was to become future successes in state tournaments.

A testimony to her consistent play was when she won the Super Senior state tournament five years in a row. For many years she participated in the Cherryland Open, a tournament that annually rotates through the county’s courses.

While Aiken has thoroughly enjoyed her competitive engagements, she says tournaments can be “humbling experiences,” but that they also ingrain lessons of respect and dignity toward opponents. “Tournaments provide the opportunity to play quality courses and meet many new, wonderful people at the same time,” she said.

Aiken’s tournament participation is no longer as commonplace as it once was, but her independent play and league play keep her occupied on the course throughout the summer.

In deviation from standard play, Aiken is also an avid “scrambler” who enjoys playing in scrambles across the county. Aiken, whose strengths are driving and chipping, enjoys the fast-p

For those unfamiliar with the alternate game of scramble, it is a game that typically involves two to four participants. Every golfer tees off and whoever has the best shot is where everyone else shoots on their next shot. This continues until a ball is finally sunk.

With the game of golf having been an immense influence on her own life, both socially and recreationally, Aiken has dedicated part of her time to improve golf in the county and help the younger generation with the game. Aiken sat on the board of the Door County Golf Association for many years; its primary goal was to raise funds to support junior golf, give scholarships and promote golf within Door County. Aiken says she “loves to see the kids participating” and currently assists the coaches at Idlewild Golf Club in the junior program.

If these budding golfers exhibit a passion and lifelong love for the game of golf similar to that of Aiken, then golf has a bright future on our peninsula.