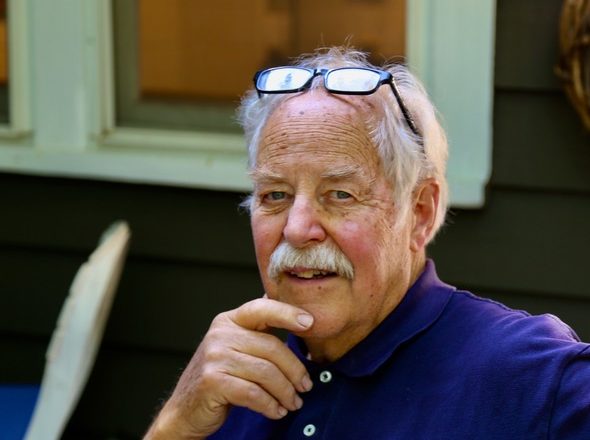 With portraits, landscapes, abstracts in oil, pastel portraits and charcoal sketches, Emmett Johns is nothing if not versatile. But for him, each medium has much in common with the others in that they’re all fundamentally about composition and design.

“It’s not one versus the other,” he said. “It’s all one. The landscapes that I do are abstracted. I am using the same principles in abstract paintings that I use in my landscape paintings.”

Even portraits benefit from his abstract work, he said, and they set him apart from others who are painting in the genre.

“What made my portraits satisfying is that I did great backgrounds, and I incorporated the clothes,” he said. “I didn’t just do a face and some head and shoulders. I tied the whole thing together in a pleasing composition, and the most important thing: I got the likeness.”

He obviously did. He made a living from portraiture, describing it as his “day job.” But he never went for the “easy money,” he said, which included executive portraits. He’s painted some throughout his career, but not many more than a handful.

“I didn’t want to get drawn into doing executive portraits because that’s all you’d end up doing,” he said.

Johns said he paints for the integrity of art and because of a responsibility he feels to use the gift he has in a meaningful way. He learned this from local artist Tom Uttech, a Wisconsin native who’s represented by Edgewood Orchard Galleries and other galleries around the country. Uttech creates imagined landscapes set in the northern United States or Canada. Johns recalled a one-day workshop with Uttech as one of the greatest days of his life.

“My responsibility is to be the best artist I possibly can be,” Johns said. “It is more than just a job earning money.”

Another of the influences that helped him move from illustration to fine art – Robert Henri’s book The Art Spirit, published in 1923 – entered his life while he was a drawing instructor in Chicago. Johns’ original copy is held together, barely, by rubber bands. The book is not a how-to, but an overview of how an artist can think about life, work and the importance of brushstrokes in painting.

“Your brushstrokes are abstract, and each one is related to other brushstrokes,” he said. “You are constantly trying to keep an interest and not have strokes that are repetitious and uninteresting. One brushstroke connects to another brushstroke, and they tie the whole painting together. It goes back to those cave paintings that were designed so beautifully 30,000 years ago.”

Johns has immense respect for the landscapes of Paul Cézanne and Camille Pissarro, whose work he’s enjoyed at the Musée d’Orsay in Paris. And he goes back to Uttech, and his big paintings that require a skeleton to hold them all together, as a source for knowing when a painting is done: When it becomes invisible or holds no eye traps.

“I use that in my teaching,” Johns said. “I have a mirror and look at portraits in reverse, and then I can see things that are out of key. You want to get a painting to the point where there are no eye traps.”

Art is the most important thing in Johns’ life – almost. He credits his wife, Jan, for supporting him throughout a career that has required his attention 12 months a year, six days a week.

“All my success is due to being married to this woman,” Johns said.

That sentiment was surely captured in one of his latest works: He recently took first place in the Door Prize for Portraiture for a pastel portrait of his wife.

Emmett Johns, 80, lives in Albuquerque for most of the year but has spent the summer in Fish Creek since 1980. A native of Rockford, Illinois, he returned to Illinois – even after moving from Chicago to Albuquerque in 1973 – to paint portraits for two weeks for a gallery at Woodfield Mall in the Chicago suburb of Schaumburg. The gallery booked him ahead of time to paint nine portraits a day.

Judi Doman, who ran Door County Confectionery in Fish Creek’s Founders Square, had a shop in Woodfield Mall around the corner from the gallery. She suggested that Johns run a studio and gallery in Fish Creek, and this is his 41st year of doing just that.

Johns estimates that he has created 18,000 portraits, working at fairs and shopping malls.

From 1963 to 1973, he worked on the Plaza in Santa Fe each summer, traveling there when he lived in Los Angeles, New York and Chicago.

“I worked [hard] there,” he said. “You didn’t have to pay anybody, and there were no credit cards. The only people who wrote checks were people who lived in Santa Fe.”

It was otherwise an all-cash business that he ran seven days a week.

“Those were great times for us,” he said.

Johns continues to accept commissions for portraits in pastels and oils.