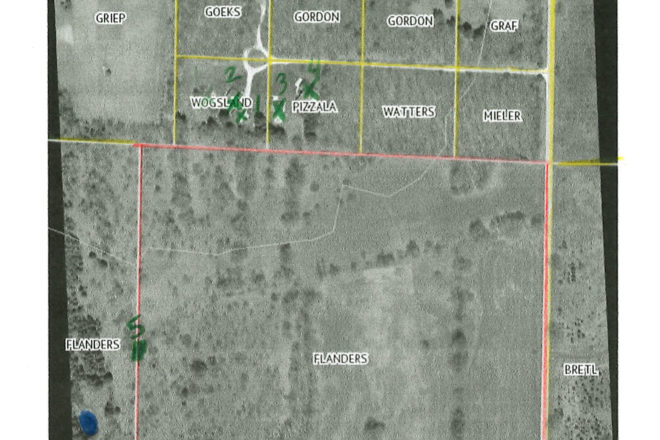 Meanwhile, neighboring residents want the project stopped even though the town has no land-use zoning that would allow them to do so

A limestone quarry intended for the Town of Gardner has been flagged by the Wisconsin Department of Natural Resources (DNR) for having endangered and threatened resource concerns.

The operation requires a stormwater permit from the DNR. Brenneke’s job is to screen applications against Wisconsin’s Natural Heritage Inventory (NHI) for threatened and endangered resources, wetlands and archaeological or cultural sites within two miles of a proposed project area. In this case, Brenneke said, “There is the [endangered] Hine’s emerald dragonfly, the [threatened] long-eared bat, a bat hibernaculum [cave] and northern hardwood swamp.”

Brenneke said on Tuesday that her next step would be to notify Franda of her findings. The owner would then need to apply to the NHI for a more in-depth review “to see if those species are within a mile or two and what they need to do to avoid them,” Brenneke said.

The process will hold up the application for a stormwater permit for a few weeks, Brenneke said, and maybe longer if the NHI needs to consult additional specialists. Depending on what’s discovered, some additional permits may be required, according to Roberta Walls, the Wisconsin DNR’s nonmetallic mining coordinator.

Generally speaking, however, Walls said that “as long as they are able to meet standards for water protection and air quality, the [stormwater] permit is granted.”

Franda said he intends to open a limestone quarry on the dry, well-sloped site. His firm will blast about every two years, he said, and mine the dolomite and limestone bedrock to use as crushed aggregate in construction projects. He anticipates the operation will last 20-40 years through what he described as a small, family business that includes himself and his two sons.

“We’re only going to take what we need for ourselves,” he said. “I have one dump truck.”

Franda said his operation will take generations to grow and will be hidden from view courtesy of a 50-foot buffer that he’s creating atop the downslope. He also said the impacts of the quarry are being overstated by neighbors who are opposed to the project.

“We plan on building a brand-new home there,” he said, referring to himself and his wife. “I ain’t scared of it.”

Neighboring property owners are concerned about the loss of the natural land, the cave structure beneath the area, decreased property values, diminished air quality and potential drinking-water contamination.

“This is a beautiful piece of property in a residential district, and we’re all on limestone,” said David Pizzala. “What’s going to happen to all our foundations when they start blasting?”

Pizzala lives off Stevenson Pier Road, down a narrow, gravel road that undulates through hardwoods and ends in a cul-de-sac of three homes. His property line is 50 feet from the first 10-acre quadrant where Franda plans to start his mining operation. Next door to Pizzala are Kyle Wogsland and Rachel Cromwell. They, too, are opposed to the quarry.

“I’m under the impression that they will install a berm and then blast behind that,” Cromwell said. “But if they start blasting next to a berm, this will be about 200 feet away from our house and 100 feet away from the garage.”

Wogsland purchased his property and built his home in 2012 based on the Town of Gardner’s comprehensive plan. That plan says the land where Franda wants to put the quarry should ideally be kept as natural land with some rural residential and agricultural uses.

“Even if they can’t enforce it [the comprehensive plan] with zoning,” Wogsland said, “I would have thought it would have discouraged them, or the owner from purchasing the land.”

“Why have it when you’re not going to refer to it or use it?” Cromwell asked.

Franda purchased the 80-acre parcel of land with the understanding that he could put the quarry on half of it.

“I wouldn’t have purchased that land and cashed in my 401(k) to buy it if I couldn’t do anything,” he said.

Franda got that impression because he went before the Gardner Planning Committee after the first of this year before purchasing the property a few months later.

“I checked with the township before I bought [the property] to be sure I could open a quarry,” Franda said. “I checked with everybody before I started, and they said I could do it, and there would be no hassles.”

That’s another point of contention for the land owners: Town officials have known about the quarry plans since January but did not notify residents, when they should have known that nearby residents would not want a quarry at the site, Cromwell said.

In the town’s defense, Town Board Chair Mark Stevenson said there was nothing for the town to review because it doesn’t have county zoning or its own zoning to enforce the land-use designations laid out in the comprehensive plan.

“At that time, as far as we’re concerned, it was okay because we have nothing in place,” Stevenson said.

The town adopted its 20-year comprehensive plan in November 2009. The document does indicate that officials and residents should use it as a guide when making land-use decisions. That’s how Wogsland and Cromwell used it, but not town officials.

When asked whether he believed a quarry should be located at the site, given the comprehensive plan’s land-use designations, Stevenson said that was beside the point because the town’s hands are tied without zoning to enforce the plan.

“I will base my actions on what we have in place to support [decisions],” he said.

The nearby property owners learned about the quarry through a Sept. 23 notification from the Door County Soil and Water Conservation Department (SWCD). The letter notified 17 property owners who live within 1,000 feet of the proposed quarry that a reclamation plan had been filed with the SWCD in accordance with Door County’s nonmetallic mining ordinance. Franda is required to receive approval from the county on that plan, which is a blueprint describing the steps necessary to reclaim the site to achieve a postmining land use.

But that covers only postmine use. The county still has no authority over the mining operations given the lack of zoning. If county zoning were in place in Gardner, there would be a public notification and input process that would include a hearing before the Door County Resource Planning Committee. Conditions could be placed on the operation that would regulate, for example, ingress and egress, setbacks, dust, blasting and the hours of operation.

“Since this doesn’t fall under county zoning, that whole process is gone,” said Greg Coulthurst, a conservationist with the SWCD who oversees the county’s nonmetallic mining ordinance. “The land use out there is kind of like the wild, wild West.”

After the 17 property owners who were affected had received notice of the reclamation plan, they had the right to request a public hearing. Coulthurst received four such requests and has scheduled that hearing for Nov. 2, 4 pm. Though anyone may speak during the public meeting, the only topic on the floor is reclamation, not operation.

“If someone says they don’t like the dust or blasting or hours of operation, none of those are reclamation issues,” Coulthurst said. “I can’t regulate any operational activity.”

The town already held one meeting last week about the topic. About 20 people showed up, including District 1 Rep. Joel Kitchens and his Democratic challenger for that seat, Kim Delorit Jensen. Stevenson said he intended to call another special town board meeting, tentatively for Oct. 28, to update residents on what he’s been learning about options after seeking advice from legal counsel and the Wisconsin Towns Association.

Stevenson said he still believes at this time that the town can’t stop the mine, but he’s in favor of adopting zoning. He thinks now might be the best time to convince the remaining board members of its necessity.

“I understand people don’t want zoning, but there’s a reason for zoning,” Stevenson said. “This is a good case for it.”