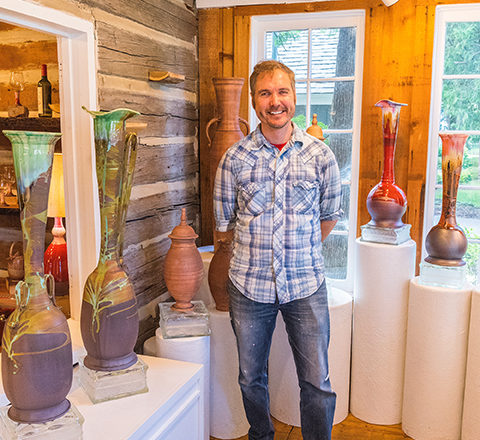 James Brown’s music helps throw pots. It inspires a pair of hands to make a product that’s precise yet a little funky, pottery that is decidedly different from the traditional pottery that’s made with Johann Sebastian Bach’s help. Which is in turn quite distinct from what happens when you throw an electronic music album on, pairing tightness of rhythm and harmony with experimentalism.

Those hands that fold music into clay belong to Ryan Pederson, potter and owner of Ephraim Clayworks.

“The music in the background is filtered through me,” he said. “I don’t really think about it, it just influences the product.”

A “reformed motorcyclist,” Pederson mixes skillful experience with a wide range of human sentiment to create his unique pieces. And he’s got a thing for James Brown.

“The J.B.s, those are my favorite albums. They’re mostly instrumental, and then he’s just like, ‘Who is that over there? That’s so-and-so on the drums! Let’s take it home, take it to the bridge! Make it funky!’ He just shouts every once in awhile, and it’s awesome because it’s totally emotional and he’s so skillful at what he does. To do what he does you have to have done it a lot. And he’s to the point where he doesn’t think about it.” 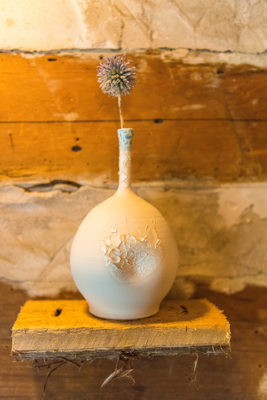 Pederson creates a flaky texture on his ornamental pieces by using a basic glaze that has a higher shrinkage rate than the porcelain. Photo by Len Villano.

That instinctual music-making mirrors how most potters go about their work. The longer you let the clay sit on the wheel, the weaker it gets, so all your creative decisions should be made with little to no hesitation.

There are a few more constraints in the world of pottery, though. Especially for Pederson, who uses a delicate porcelain for most of his pieces, that instinctual creativity has to be tempered by technical skill and a knowledge of how to make structurally sound pieces.

“The architecture is super important…These are ideas I’m really interested in. How thin can I make it? How much can I screw with it, and when will it collapse?”

Underlying Pederson’s creative process is a philosophy rooted in tradition. A trip to a central Turkish village whose heritage is steeped in millennia of making pottery changed his perspective forever. He went from wanting the newest motorcycles and cars to having a profound respect for what has lasted.

“Tradition is so easily dismissed,” Pederson said. “And I shouldn’t dismiss those who dismiss it, because I was one of them. I get that. But there is all this wisdom out there from the people that were around before us and I’d like to know a little about all of them.”