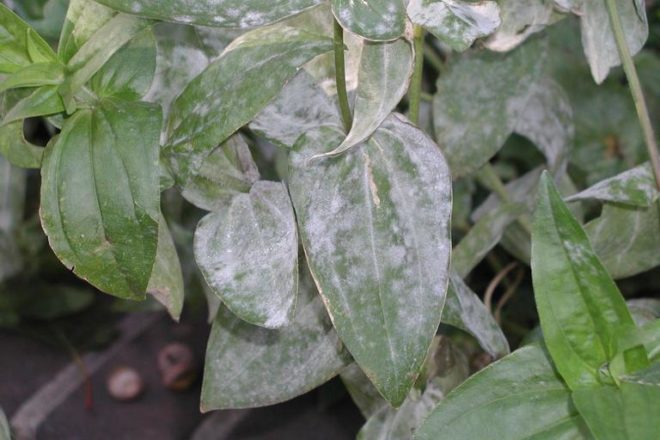 A common sight this time of year is plant leaves covered with what looks like splotches of white dust. Plant leaves may have only spots of white, while others are completely covered. Some plants, like lilac bushes, may have large sections of the bush with grayish-colored leaves. Even though it might look like someone tripped near your plants while carrying a bottle of baby powder, it is actually due to a very common fungal disease, powdery mildew.

Powdery mildew is caused by a number of different fungi called ascomycetes (sac fungi). These fungi require a living plant host in order to survive. They overwinter on the plant or in plant debris on the ground.  Many types of plants are attacked by the fungi, including vegetables, fruits, herbaceous and woody ornamentals, and trees. Conifers, however, are not susceptible to powdery mildew.

Powdery mildew should also not be confused with other plant diseases including downy mildew. Downy mildew normally produces white-colored spores on the underside of leaves, whereas powdery mildew spores are predominantly on the upper surface of leaves.

Powdery mildew is typically host-specific, so the fungus that attacks your squash plant is not the same species that would attack your lilac bush, even though the symptoms might look the same. Therefore, the disease won’t spread between unrelated plants. However, the presence of powdery mildew in one section of your garden is an indication that environmental conditions are favorable for the disease, so it might start popping up elsewhere.

Optimum environmental conditions for powdery mildew are humid, warm days (68° – 81°F) with cool nights. Unlike many other fungal diseases, powdery mildew does not need wet leaf tissue to spread. For that reason, counterintuitively, frequent rain is actually unfavorable for disease development.

This summer, we had many days that were dry but humid. In general, fungal diseases are less prevalent in dry years than in a wet year (like last year). However, at least in my garden, my squash and pea plants were decimated by powdery mildew at the same time as many other plants were drooping due to a lack of water.

Fortunately, despite the obvious look, powdery mildew is primarily a cosmetic disease that does not require treatment. Leaves might look rather funny, but otherwise the plant is OK. For ornamental trees and shrubs, typically treatment is only recommended if the plant has severe leaf loss for multiple years in a row. Lilac bushes, for example, do not need to be treated and infected leaves should not be pruned out in the fall.

In some plants, including rose and ninebark, powdery mildew can cause the leaves and branch tips to die and extensive tip dieback may require treatment.

In vegetable and fruit crops, powdery mildew can have more serious implications, but even then fungicides are typically not recommended. Many plants in the Cucurbitaceae family (gourds, cucumbers, summer and winter squash, and melons) are highly susceptible to powdery mildew, so grow resistant varieties when possible. Infected cucurbits will have characteristic white spores on the leaves and leaves will often wilt and die. If the plant dies prematurely, the fruit may not fully ripen and will not be sweet. Severe powdery mildew infections can also lead to secondary infections from other pathogens, including various fruit and stem rots.

The most effective control is to prevent the disease from showing up in the first place. As mentioned above, when shopping for plants, try to find ones that are resistant to powdery mildew. They still may get the disease if environmental conditions are favorable, but typically, it will not be as severe. Also, inspect all plants before purchase and look for any powdery, moldy-like substance on the leaves, stems and shoots of seedlings.

Lastly, follow good gardening practices. Space plants farther apart to allow for better airflow to reduce humidity and control weeds. Additionally, water early in the day and only at the base of plants (not overhead watering) so the leaves stay dry or dry off as quickly as possible. For woody plants, follow recommended pruning practices for more sunlight and airflow throughout the canopy. New plant growth is most susceptible to powdery mildew infection so excessive pruning and fertilizing can lead to an increase in plant growth, causing a higher chance of infection or a more severe infection. At the end of the growing season, gather any infected plant material and throw it away (do not compost it) to reduce the number of spores present for the following year.

If fungicides are deemed necessary, there are a number of different products registered for powdery mildew control including some sulfur-based products. Carefully read all product labels before purchase to ensure that the fungicide is registered for use for powdery mildew control on that specific plant. Only apply fungicides according to the label directions and follow all safety requirements.

One homemade fungicide that may work is made by combining 1½ tablespoons of baking soda mixed with 3 tablespoons of light-weight horticultural oil (not cooking oil) into 1 gallon of water. This can be used in a similar manner as other fungicides. When using oils or homemade products, it is generally recommended to spray a few leaves first to make sure the plant isn’t damaged by the spray. Do not overuse this concoction because it can eventually cause a buildup of salts in the soil leading to other problems.

For now, as you walk around your yard or look at plants around town, take note of any leaf infections that look like powdery mildew. If you find any, congratulate yourself that you have identified it and then go enjoy the fall weather since until garden cleanup begins, there is nothing that needs to be done right now.