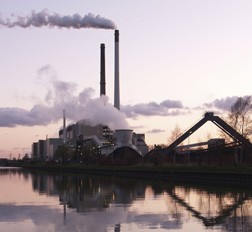 In 2013, reported emissions from large industrial facilities were 20 million metric tons higher than the prior year, or 0.6 percent, driven largely by an increase in coal use for power generation.

The Greenhouse Gas Reporting Program is the only program that collects facility-level greenhouse gas data from major industrial sources across the United States, including power plants, oil and gas production and refining, iron and steel mills and landfills. The program also collects data on the increasing production and consumption of hydrofluorocarbons (HFCs) predominantly used in refrigeration and air conditioning.

More than 8,000 large-emitters reported direct greenhouse gas emissions to the program in 2013, representing approximately 50 percent of total U.S. emissions. The data from these facilities show that in 2013:

• Power plants remained the largest source of U.S. greenhouse gas emissions, with more than 1,550 facilities emitting more than 2 billion metric tons of carbon dioxide, roughly 32 percent of total U.S. greenhouse gas pollution. Power plant emissions have declined by 9.8 percent since 2010, but there was an uptick in emissions of 13 million metric tons in 2013 due to an increased use of coal.

• Reported methane emissions from petroleum and natural gas systems sector have decreased by 12 percent since 2011, with the largest reductions coming from hydraulically fractured natural gas wells, which have decreased by 73 percent during that period. EPA expects to see further emission reductions as the agency’s 2012 standards for the oil and gas industry become fully implemented.

• Reported emissions from other large sources in the industrial and waste sectors increased by 7 million metric tons of greenhouse gas pollution, up 1 percent from 2012.

Under President Obama’s Climate Action Plan, EPA is taking steps to address carbon pollution from the power and transportation sectors, and to improve energy efficiency in homes, businesses and factories. Under EPA’s proposed Clean Power Plan, carbon emissions from the power sector would decrease by 30 percent below 2005 levels and electricity bills would shrink by 8 percent by 2030.

EPA’s pollution standards for cars and light trucks for model years 2012-2025 will save Americans more than $1.7 trillion at the pump. In addition, the agency’s partnerships with industry have prevented more than 365 million metric tons of greenhouse gas pollution, equal to the annual electricity use of more than 50 million homes.