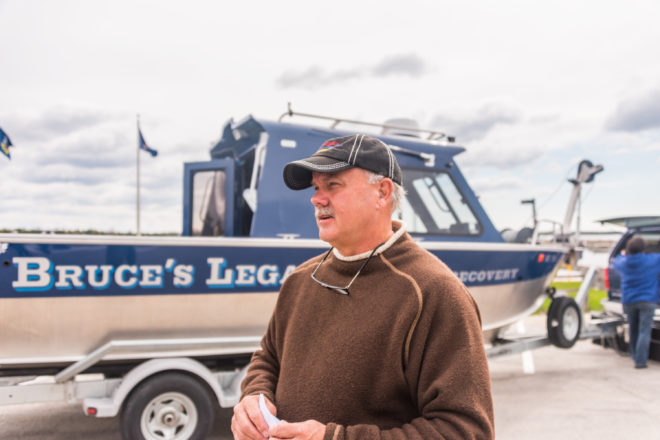 Keith Cormican began the Bruce’s Legacy nonprofit in memory of his brother, who died during the search for a missing person in Robinson Creek near Black River Falls, Wis. Photo by Len Villano.

When Keith Cormican of Black River Falls took his boat Bruce’s Legacy into the waters of Baileys Harbor, it was the most fun he has had pushing off of a dock. Cormican and his torpedo-like sonar were searching for shipwrecks, namely the F.J. King, still undiscovered after going down in 150-feet of water back in 1886.

The sonar pulses along behind the boat at about 50-feet above the lake floor, sending an image of the rocky bottom back to the boat.

“You see the detail of the timber, the railings, this thing is just amazing,” said Cormican, pointing to the image on his laptop. “It’s really intriguing and if we can get on a wreck that has never been found before that’s just a bonus.”

Cormican hooked up with his longtime friend Jim Robinson, operator of Shoreline Cruises & Charters in Gills Rock, whose knowledge of the waters around the peninsula and the rest of Lake Michigan are unmatched. 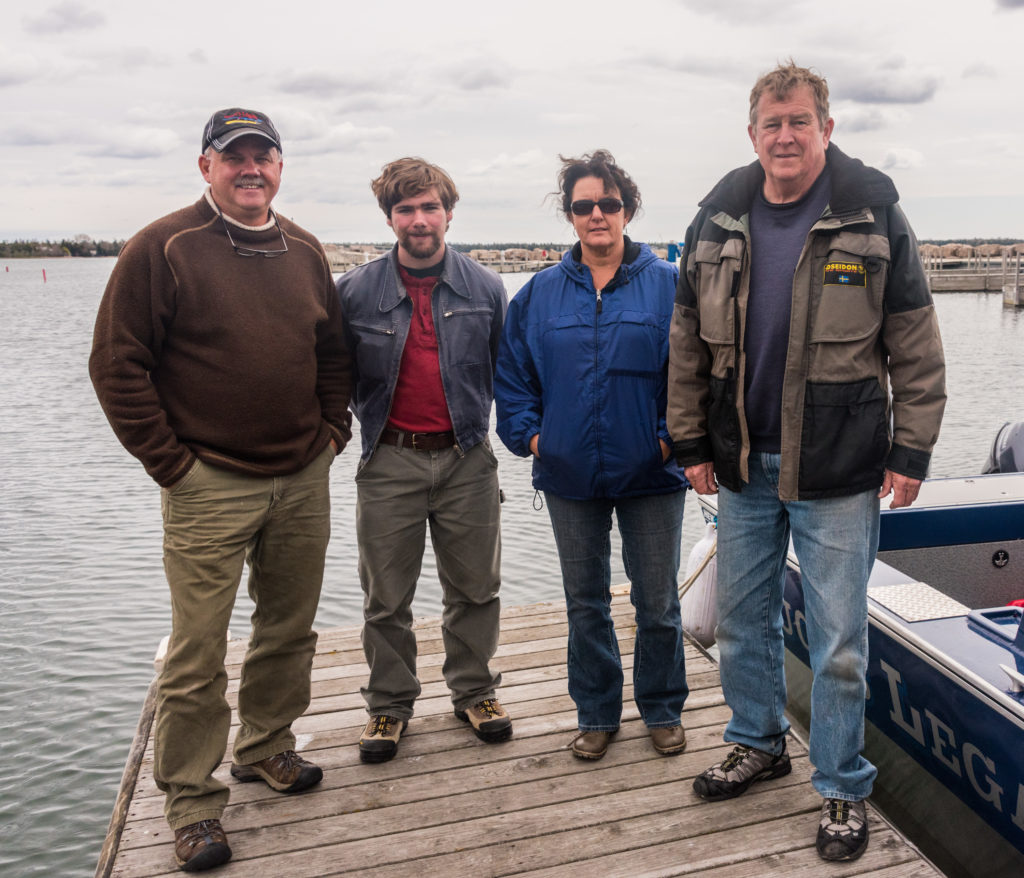 “He’s lived on this lake, he’s got so much knowledge,” said Cormican. “That’s the reason I really started with Jim…because there’s a guy I can gain a lot of knowledge out of.”

The knowledge he is gaining from Robinson on their shipwreck hunt is to help prepare Cormican for the other task of his nonprofit, Bruce’s Legacy. For the past three-and-a-half years, Cormican has traveled throughout North America helping the families of drowning victims get closure.

“When I started Bruce’s Legacy, I’d been all over helping departments try to find missing people,” said Cormican, who has spent 25 years in the public safety field. “Some people just never get found. I knew there’s sophisticated equipment out there to have a better chance to finding these people but it costs big bucks.”

Still, Cormican invested in the equipment to help suffering families find their loved ones. In 1995, Cormican was in one of those families.

“My brother lost his life in 1995 as a firefighter doing a recovery on a missing canoer in our county,” said Cormican of his brother Bruce. “Three daughters and a father went canoeing on a swollen creek. The father perished and the three daughters survived.”

On the mission to recover the father, Bruce Cormican was swept up in the current of Robinson Creek.

“Back then, they didn’t have any training.” 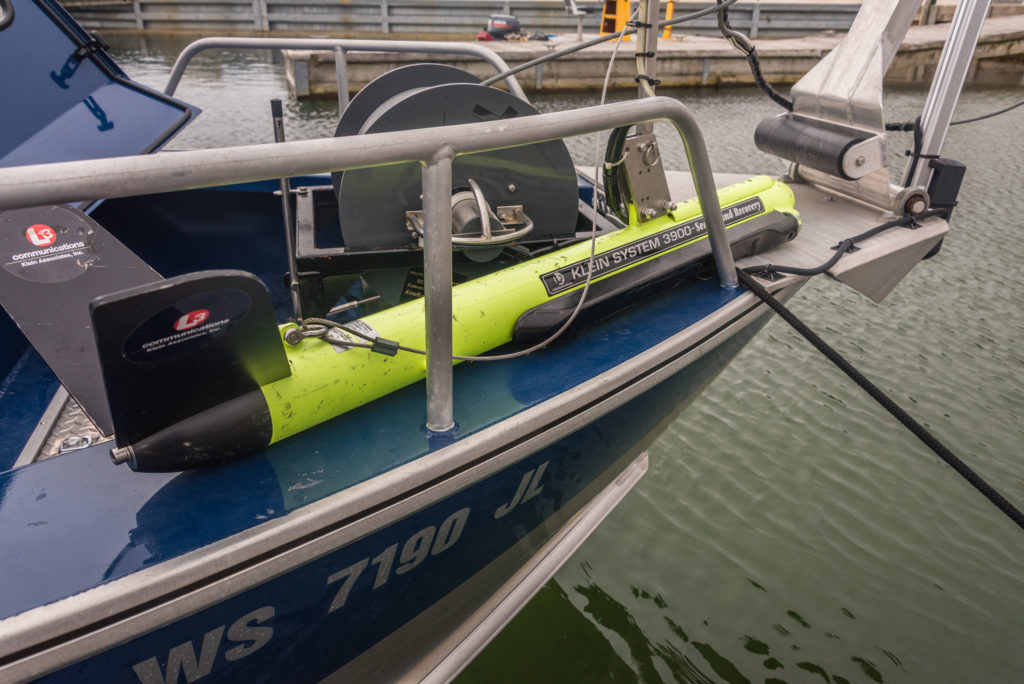 The sonar torpedo is pulled through the water sending pulses, which deliver images through a cable back to the boat. Photo by Len Villano.

With the technology Cormican has, the rescue attempt that took his brother’s life may have had a different outcome. Now, Cormican travels throughout the Midwest on searches while training local law enforcement how to best handle water rescues. Touched by the experience in his own family, he simply seeks to be the person who can close the book on a story that has otherwise gone unfinished.

“I’ve dealt with so many families that have not had [closure] or had extended time to get that and it’s brutal on families to know that you’ve got a loved one out on that lake out there and nobody can find them…We want people to know that they have more options,” said Cormican, explaining that the search doesn’t have to end when local law enforcement runs out of time and resources.

Cormican does not charge anything for families that call upon him to search for a loved one. When he travels out of state, such as his trip to Pyramid Lake north of Reno, Nevada, earlier this year, he simply asks for fuel and lodging compensation.

He has traveled from New York to British Columbia helping families get closure on the tragedy of their missing loved ones.

His visit to Door County was prompted by a trip he will make later this spring to Port Sheldon, Mich., to help find two fishermen who were lost on the lake in the fall of 2015.

“We got called in on that one and before this boat [Bruce’s Legacy], I had just operated off of a pontoon boat and that’s not big enough for the big lake,” said Cormican. “We got three square miles searched last year in the four days but then the winds came in. So we have that one rescheduled. We’re going to go back over there. We’re getting things dialed in.” 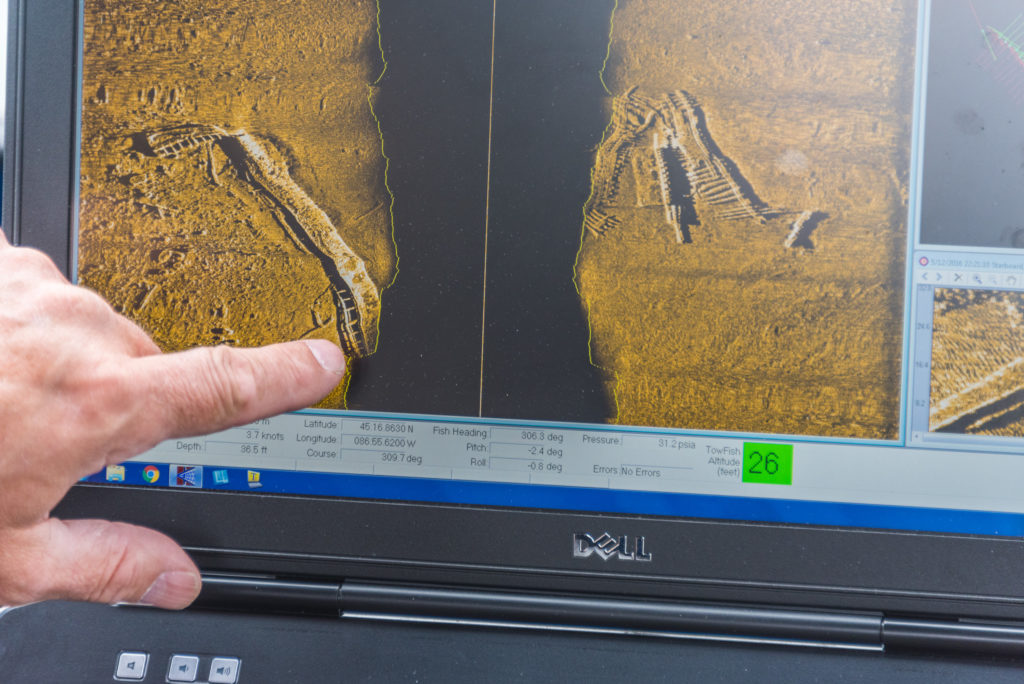 The images produced by sonar are sharp enough to distinguish the railing on a sunken ship 200 feet beneath the surface. Photo by Len Villano.

Off the shores of Baileys Harbor, Robinson is helping Cormican navigate the harbors and teaching him how to spot commercial fishing nets. When Cormican goes to Michigan in June, he will know how to handle the big lake.

But to practice, the team will search for the many shipwrecks surrounding the peninsula, collecting detailed images and even spotting things that no one knew was there.

Pulling up one of the images he collected in Gills Rock, Cormican pointed to a long chunk of boat set against an otherwise smooth lake bottom. The wreck had been the attraction of scuba divers for years, but until Cormican took his sonar imaging, no one knew that another section of the ship had broken off and was laid to rest several hundred feet away.

“To have something fun to actually come out and look for is pretty intriguing, I won’t deny that,” said Cormican. “I’d like to get more involved with that part of it as time goes on, but I’ve got a business to run to and I’ve got to try to find a happy medium with that.

“The shipwrecks is the fun stuff, and I know finding people is not glamorous by any means, but it means so much to the participating families. That’s the reason I do it, because I’ve been doing public safety for 25 years and I’ve dealt with grieving families for 25 years and when you can be the one to give them that closure, it’s huge for them. That’s what Bruce’s Legacy is really about – giving that closure for families. I’ve learned so much from Jim this week that’s going to help keep us safe next month. If we find a cool thing here and there, that’s just a bonus.”