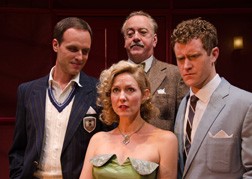 Peninsula Players Theatre, in conjunction with its production of Frederick Knott’s classic thriller Dial M for Murder, will host mystery scholar Dr. Christopher Chan on July 22 at 6:30 pm. Tickets to performances are available, admission to the pre-show seminar is free.

Chan, a Lawrence University graduate and Agatha Christie website editor, will speak about Alfred Hitchcock and the adaptation of Knott’s play into film. Chan lives in Milwaukee and earned his Ph.D. degree in U.S. history from Marquette University. He is studying to earn a Master of Library and Information Science degree from UW-Milwaukee.

He teaches online graduate history classes and writes for agathachristie.com, the official Agatha Christie website, and the magazine Gilbert at chesterton.org, in addition to writing historical and critical essays on Agatha Christie’s work.

Dial M for Murder was first staged on Broadway in 1952 and Knott adapted the script for Alfred Hitchcock’s 1954 classic film. Dial M for Murder has been translated into 24 languages and the play has been produced in more than 30 countries.

On Aug. 13, Peninsula Players with host a pre-show seminar in conjunction with its production of Ken Ludwig’s comedy Lend Me a Tenor.