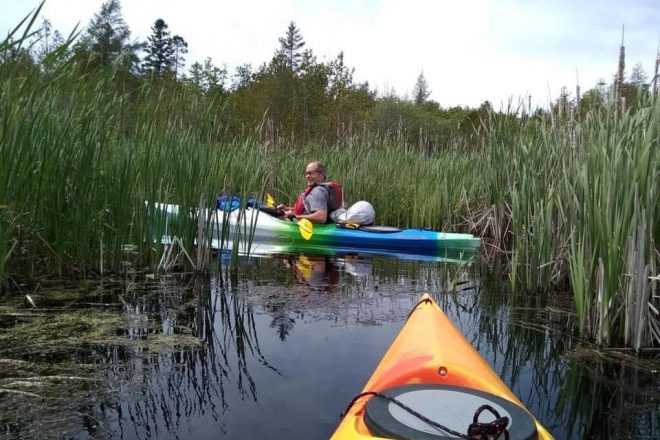 Patrick O’Connell of Sturgeon Bay is combining a hobby and a passion with rewarding work, and while he’s at it, he’s sharing environmental and nature lessons with visitors and outdoor enthusiasts.

When he’s leading hikes through his informal Door County Outside group, or guiding kayakers for Peninsula Kayak Company, he shares lessons from his natural-sciences background so hikers and paddlers can help protect Door County’s natural treasures and prevent the spread of nonnative plants.

“I lead hikes for exercise, but I usually give people some background information on what they’re looking at – mostly the geology and the plants, not much on the birds or the animals,” O’Connell said.

For example, during several hikes on the Lake Michigan side of the peninsula, he talks to trekkers about Door County’s boreal forests, which are some of the southernmost in the United States. Lake Michigan keeps summers cool enough to suit the white pine, spruce and balsam fir that thrive in these areas, as well as tamarack and white cedar in the lowlands and wetlands. These patches of forest are also suited to migratory birds that aren’t normally common in Wisconsin.

He said that although the Ahnapee Trail is not surrounded by pristine forest and wetland, he enjoys the scenery and the variety of things he sees along the way. That includes a lot of sandhill cranes, otters occasionally in water-filled ditches and, he believes, a rare whooping crane. He said when he saw the large, white crane, he called the International Crane Foundation in the Baraboo area to verify identifying marks and ask whether it’s possible for one to make it to Door County. He was told it’s certainly possible.

O’Connell and fellow Peninsula Kayak Company guides often launch from Mr. G’s to lead groups down Logan Creek into Clark Lake. He recently expressed concern about the threat of a feathery aquatic weed, Eurasian water milfoil (EWM), spreading from Clark Lake into Logan Creek. Boaters are reminded of the importance of thoroughly cleaning off their boats, canoes and kayaks before moving them from one body of water to another to prevent the spread of invasives such as EWM.

“Logan Creek has native (northern water milfoil), nonnative (Eurasian water milfoil) and hybrid milfoil,” Koyen wrote in an email. There’s also “lots of really great vegetation. There are prehistoric macroalgae, water celery (an important submergent plant for ducks), several types of pond weed, and several different types of emergent vegetation. All of these seem to be thriving in the area where Clark Lake and Logan Creek meet (based on observations from a recent site visit in July of 2021).”

Koyen said the native species provide important ecological functions as fish habitat or for waterfowl foraging, but they also grow so densely that it makes it difficult to canoe or kayak. Still, that also means the natives make it difficult for invasives to take over.

“One of the best ways to combat milfoil is to allow native vegetation to remain established,” she said.

In addition to the nature and recreational kayak tours, O’Connell handles the kayak instruction and leadership for an Ephraim Historical Society history tour every other Friday.

O’Connell lived in the San Francisco area before moving to Door County a couple of years ago.

“My mother already lived here [Sturgeon Bay], and coming to Door County was a chance to remake myself,” O’Connell wrote in an email. “It’s full of charm, friendly people and opportunities for outdoor recreation. It was a landscape I was familiar with and had water everywhere.”