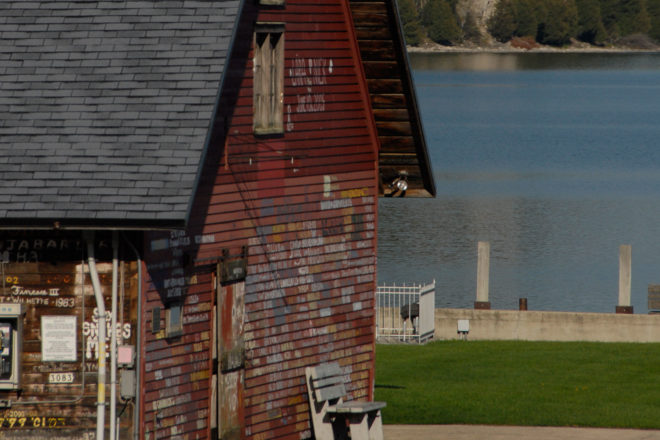 Founded in 1853, Ephraim is historically significant on many levels, not least of which is its status as one of the oldest organized communities in Door County. Today, the village’s more than 150 year-old history and the story of its early settlement are preserved through the dedicated efforts of the Ephraim Historical Foundation, established in 1949. Serving as a testimony to the past and a tribute to those who paved the road for the future, the foundation provides a living history of the Village of Ephraim.

In the past 58 years, the foundation – supported by the Village of Ephraim, its residents, visitors, and countless volunteers – has succeeded in acquiring and restoring five historical buildings, formulated village walking tours, and created three historical districts. Walk through the foundation’s lovingly renovated, restored buildings and the voices of early Ephraim echo with each step.

From its earliest days, education was important to the community’s founding fathers and mothers. Just six years after Pastor Andreas Iverson led a small band of settlers to Ephraim’s shores, a one-room schoolhouse constructed of flat-hewn logs was erected.

A simple white structure, the Ephraim schoolhouse was on the verge of demolition in 1949, a year after it was closed to students. Former teacher Helen Sohns had spent many years in the building teaching Ephraim’s children and valued its place in the village’s history.

Among the first settlers to Ephraim, Aslag and Halvor Anderson left a significant mark on the village. The “Anderson Corner,” eventually designated one of Ephraim’s historic districts, consists of the family’s barn, home, store, and dock. The Anderson house, constructed in the late 1860s, is the only one of the buildings privately owned.

The Anderson family’s pier and dock were constructed in 1858; their general store was located at the end of the dock. Situated in the depths of the frontier, the dock was vital to community life, serving as the only access to the outside world. In actuality, Anderson’s corner was the heart and pulse of the growing village, its business and social center.

Following the purchase of the Pioneer Schoolhouse, the foundation turned its attention to Anderson dock, recognizing its historical importance. In serious disrepair, the dock and its warehouse were purchased by the village for $500 with the stipulation that repairs be undertaken. With financial contributions from the foundation, improvements were completed.

As trails were carved through the frontier, the Anderson Store eventually  found itself situated alongside the shore road. Owned and operated by the Anderson family for 100 years, the general store was popular with tourists who increasingly visited from the cities to the south. Passenger steamers dropped anchor at the Anderson dock, their passengers stopping by the store to purchase essentials or to frequent the Western Union Office located within.

The Anderson Barn, built circa 1880, reflects the history of the peninsula. Located across from the family’s store, the barn was used as a riding stable in the first half of the 20th Century. Privately purchased in 1986, the barn had fallen into disrepair and required considerable restoration, including a new foundation. Today, the old Anderson Barn serves as the foundation’s museum, featuring permanent and rotating historical exhibits throughout the year.

Arriving on the shores of Green Bay, Andreas Iverson and his family built a home on the hill above the waters. The oldest frame house in Door County, the residence is distinguished by its beautiful proportions. The first church services and school classes were conducted on its main level.

Purchased by the Walker-Field family in approximately 1912, the house was maintained in its original condition with minimal modernization. Remarkably, the correspondence of the third minister’s wife, Anna Petterson, survived and documents the interior construction and furnishings of the house. Following the foundation’s purchase of the property in 2001, Anna’s letters proved instrumental in its representation of the late-1800s period.

Chronicling her life in Ephraim, Anna’s precise and detailed information allowed for an accurate interpretation of life in the late 1800s. Under the auspices of the foundation, Historic Iverson House was opened to the public in 2005.

In the early 1850s, Norwegian immigrants Thomas and Kirsten Goodletson built a one-room log cabin on Horseshoe Island. Shortly afterward, Thomas moved the cabin across the ice to Ephraim. Members of the family lived in the cabin and it was used as the Bethany Lutheran Church meetinghouse until the mid-1880s. Over the ensuing years, the cabin was utilized in a number of ways, first as a farm building and later as a honeymoon cottage for Hotel Ephraim.

In 1973, when the hotel was converted to the Ephraim Condominiums, Ted Hoeppner donated the cabin to the foundation and it was moved to a location on the hill and just above the Pioneer School. Completely restored, the “Goodletson Cabin” provides an excellent example of typical frontier structures of the corresponding period.

Another structure preserved by the foundation, the Svalhaus, a traditional Norwegian cooling house, is not open for tours; however, the structure serves the foundation in a number of capacities. Its use is free to all non-profit and civic organizations for activities and private groups may rent the building for a fee.

With an appreciation of what has been and a vision for what will come, the Ephraim Historical Foundation continues its dedication to the history of the community. So many individuals contributed to its birth and life. But one particular individual stands apart as the guiding force behind the organization in its formative years.

“Founding Door County’s first preservation society may sound like an ordinary, everyday event, but it was not ordinary, and Warren Davis was not an ordinary person,” Goodwin Berquist wrote in Half a Century With The Ephraim Foundation. Added former foundation president Oscar Boldt, “He ‘had the pulse of the village and a sense of vision.’” Simply put, Davis loved Ephraim, and once shared with Berquist, “I want to do my best to preserve its uniqueness and build up its attractiveness.”

The Ephraim Historical Foundation hosts events for the entire family beginning in June. All five foundation museums are open to the public Tuesday through Saturday, 11:00 am – 4:00 pm. Excluding the Goodleston Cabin, docents in period costumes are on duty at each site. Walking tours of Ephraim step off from the Anderson Barn History Center Tuesday – Friday, at 10:30 am. Tours are $5 for adults and $3 for students; children ages six and under are free. Entry to the five museums is included in the tour fee; passes are valid until tours have been completed.

For a calendar of events or additional information contact the Ephraim Historical Foundation at 3060 Anderson Lane, (920) 854-9688, and online at www.ephraim.org.