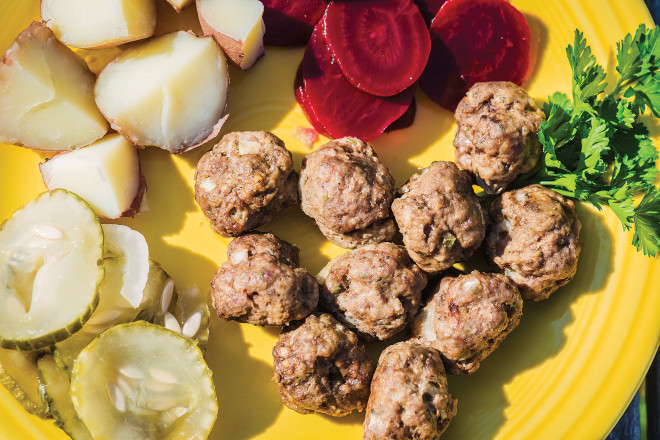 There’s one reason why Swedish meatballs are important to me, and she’s pictured here. That’s my mom – Jean (Lundburg) Ehmke – the daughter of two Swedish immigrants, one from Stockholm and the other from Åseda in Småland. As a proud Swedish woman, my mother tried to reinforce the traditions of her heritage and culture; the steadfast way to do this is through food, including the Swedish meatball (a food my mother has fed me since I first had teeth). 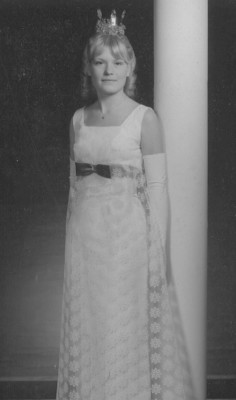 I took this opportunity writing for Door County Living to stop and learn how to make meatballs so I can keep this food in our family – even as I share the family recipe with you, our readers.

They’re not special, pretty or elaborate to make, but meatballs are part of Swedish heritage. Meatballs are a common dinner meal and served as part of Smörgåsbords during special occasions and holidays. These meatballs were typical fare in my mother’s house as she grew up. “We would have meatballs as a regular weekly meal with boiled potatoes with just butter, salt and pepper, pickled cucumbers and beets,” she said. “I never had a hamburger until I was about 12 years old and my mom had to ask our neighbor how to make it. I first had hamburgers at a friend’s house, and told my mom I wanted them. She made a hamburger by taking a Swedish meatball and flattening it. That’s when she went to the neighbor…when I told her it was wrong.”

My mormor (grandmother) Edith Lundburg lived on a farm in Sun Prairie, Wisconsin, and learned to make meatballs from her mom and aunt when she was a girl. Her mother died when she was 9 years old, and when she married my morfar (grandfather), her mother-in-law taught her to make traditional Swedish food. The recipe here is the recipe that has been passed down through the Lundburg family for more than a century.

I want this recipe to pass from me to my kids, their kids, and so on. This meatball recipe is in my blood – it’s part of my heritage, a heritage that should be preserved and shared.

Mix ingredients thoroughly and shape into 1½-inch balls. Fry in pan until brown, just enough so they’re not crusty, or bake at 350º until brown – not crusty. Plate the meatballs and garnish with parsley. A true Swede serves without gravy or sauce, but with boiled red potatoes (potatis), pickled beets (rödbetor) and cucumbers (inlagd gurka).