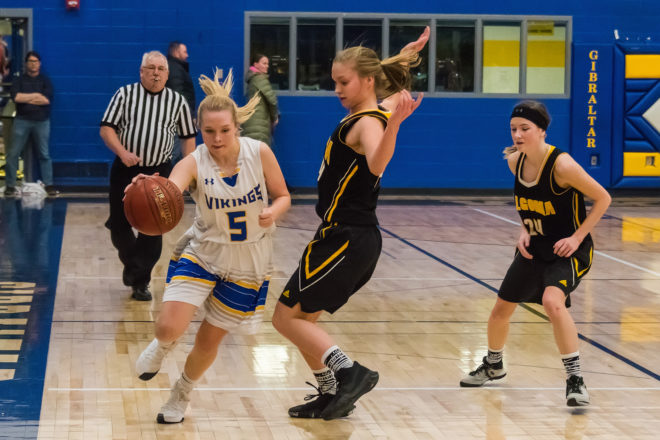 The Gibraltar Vikings hosted the Algoma Wolves in the high school girls basketball regional playoff game during their 2017-18 season. Photo by Len Villano.

Coach Josh Kropuenske was direct when he was asked about his team’s goals this season.

“We want to contend for the conference title and win Gibraltar’s first regional title in basketball,” said Kropuenske, whose team finished last season 15-8 overall and 11-5 in the Packerland Conference.

Gibraltar may have the personnel to reach this goal. The Vikings return four players who scored 6.0 points or better last season. Senior Payton Pluff returns after scoring 15.1 points and grabbing 8.7 rebounds per game last season.

“We need to improve on the defensive side of the ball by applying more pressure and rebounding,” Kropuenske said. “Offensively we need to consistently hit the outside shots to open up the middle for driving lanes and our posts.”

Despite starting the season with losses to Shawano and Gibraltar, coach Erik Tauschek is excited about the season.

“We are off to a great start with our first few practices,” said Tauschek, whose team was 5-17 overall and 3-13 in the Packerland Conference last season. “They have been intense and the girls have been putting the work in early that needs to be done even though it isn’t the easiest.”

Tauschek expects juniors Autumn Hacht and Greta Meleen and sophomore Carley Wodack to be contributors to the Clippers’ attack. He added that he is confident many of his players can contribute offensively.

“I believe [scoring] will be by committee,” he said. “It will make us tough to defend because it will be a different girl scoring each night depending on the matchup. I am very hopeful that this is the year that we make the turn and get back toward being in the top of the Packerland Conference.”

Coach Dan Judas said his team will be extremely young this season, but he is excited about the talent coming back.

“We lost a lot of leadership last year, so I think the biggest thing first is who is going to step up and take those roles,” said Judas, whose 1-4 team defeated Elcho 44-39 Saturday. “This is a young team with some very exciting talent.”

Amber Roalkvan is the top returning starter at 6 points per game, followed by Zoe Kuehn at 5 points an outing. Grace Brauer (3.1 ppg) and Kaitlyn Schauske (1.6 ppg) round out the top returners.

“If the girls can put it together they can make some noise in a very tough Packerland Conference,” Judas said. “When the season is over, I want to be able to see that each day we got better. If we accomplish that good things will start to happen for the program.”

“We will use the first part of the season to build some experience at the guard position,” said Shimon, whose team finished 21-5 overall and in the Packerland Conference. The Eagles opened the season with a 48-36 loss to Kewaunee, but rebounded with a 55-51 win over Green Bay N.E.W Lutheran.

LeGrave returns as the top rebounder with 4.4 per outing. Dantoin (4.3 rpg), Bertrand (4.2 rpg) and Shimon (3.7 rpg) add depth on the boards. Shimon said that top newcomers Nicole Norton and Jacqlyn Atkins will add depth to the Eagles’ lineup.

“We will look to take advantage of our athleticism showcasing our strong transition offense,” Shimon said. “With our lack of size this year, we will need to play good team defense and will need everyone to help out rebounding. Our players’ athleticism and knowledge of the system will be our strengths this year. We can ill afford to have any injuries this year, as depth will be a weakness for us.”