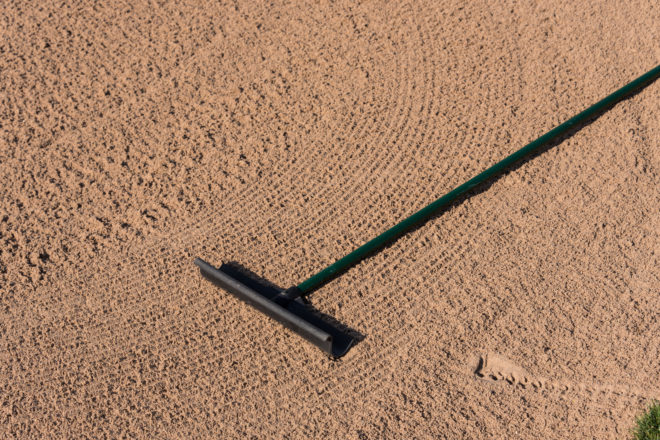 The last subject to discuss in the short game is the greenside sand shot. Sand traps are hazards and therefore you are not allowed to touch the sand with the club before playing the shot. You are allowed to take practice swings, but you cannot touch the sand while doing so. At address, the club may not be soled on the sand and the sand may not be brushed in any way during the backswing. Any of these errors will result in a penalty.

When playing out of the sand, the lie of the ball will determine the depth of divot needed for the club to slide under the ball and lift the ball out of the trap. If the lie is good and the ball is sitting well, you may open the club’s face and use the bounce of the trailing edge of the club’s sole to skim the sand.

If the ball is sitting poorly, you should close the face of the club to activate the leading edge of the face to take a deeper cut of sand. From a decent lie, where a deep cut of sand is not needed, a well-designed sand wedge with loft and sufficient bounce can be played with the club’s face square to the target line. The shaft should be perpendicular and the ball positioned to the left of center in the stance.

The type of stroke used will be identical to that used in the pitch shot. The club should swing up in the backswing and as it swings down in the forward swing, the lower body should turn through to face the target. The goal is to create a divot that starts behind the ball, cuts under it and comes out of the sand past the ball. The weight must finish on the front foot to keep the club under the ball. The swing must be forceful enough to toss the divot that the ball is riding out of the bunker.

Once the ball is out of the bunker it is the responsibility of the player to rake the bunker as smooth as possible. When entering or leaving the bunker, do it from the low side of the bunker.

Bob Augustine is a PGA instructor and the director of instruction at Peninsula State Park Golf Course.