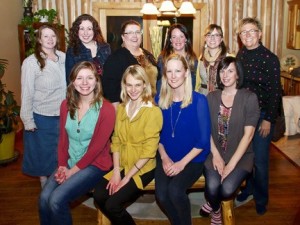 In benefit of HELP of Door County, ten Door County women of all ages and backgrounds will stand before an audience and read from Eve Ensler’s episodic play, The Vagina Monologues. The powerful, sometimes hilarious, sometimes tragic, monologues center on topics ranging from a visit to the gynecologist, childbirth, and rape.

Jessica Adams, Domestic Violence Services Coordinator of HELP and director and performer of The Vagina Monologues, says the play serves not only as a benefit to HELP but also as a means to shed light on domestic and sexual abuse. “I think Eve Ensler has a really good balance, she works you into it – sexual assault and abuse are not fun things to talk about. I think it’s important for people to have awareness for change to start happening.”

“Some might get out of their comfort zones,” says fellow actress and Youth Advocate for HELP Jess Holland, “but it’s a catalyst for people to talk about these issues that are usually so private.”

“It shouldn’t be so taboo to talk about,” adds actress Heather LaVine.

“The first time I saw [The Vagina Monologues] I was on a first date,” laughs Holland. “I was in college and I think in college it’s more expected to talk about vaginas openly because everyone’s exploring things. I feel it was more comfortable than it is now. That’s part of why it’s so fun – it’s risqué.”

Last year, Adams directed The Vagina Monologues with a cast she “hand selected.” This year she opened up auditions to the community and discovered many women who “have the guts to stand up in front of the community and talk about vaginas,” she smiles. “It’s releasing in a way. You get to put it out there, which you don’t usually do because it’s faux pas. But people want to talk about these things.”

LaVine, who works part time at Dentistry by Design, saw the call for actresses on Facebook. “From someone who’s not involved [with HELP], opening the play up to others helps get an awareness out there, because prior to this, I didn’t know much about HELP. I’m more educated now and will pass that on.”

Audience members may be closer to domestic and sexual abuse than they think. “I will give presentations [about abuse] and people will say, ‘Well, not in Door County, right?’” says Adams. “But [HELP of Door County] is busy all the time. The statistics are staggering.”

“No one should have violence in their life,” says Holland. The production is presented in celebration of V-Day, a global movement promoting creative events to increase awareness, raise money, and revitalize anti-violence organizations.

“People don’t realize how common [abuse] is or that it’s okay to get help for that,” adds Holland. “It’s so hard to even go up to your family and friends and tell them when something serious has happened to you, if you’ve been violated. This is a way for women and men to know that if they have been violated they are not alone.”

Yes, men. Though the play shares women’s stories, “men are a big part of this too,” says Adams. “This year at HELP we’ve really tried to push for men to get involved – it’s not a women’s issue, it’s a public health issue. They will find it funny, powerful, and educational too. It’s important for them to hear these stories.”

“And we all come from vaginas,” laughs Holland.