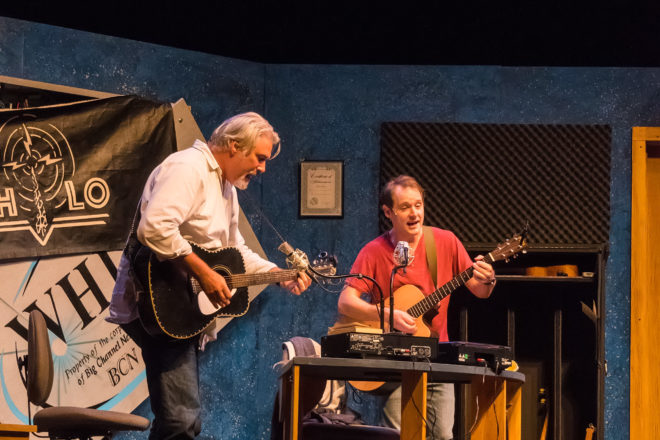 The Hurdles Left to Overcome

Theaters across the country have been hopeful that in-person performances can resume this summer after a year of virtual events and social-media engagements. For Actors’ Equity Association theaters in Door County, plans for the 2021 season depend on several factors, one of the most important being approval by the association.

The Actors’ Equity Association has released its Safety Guidance for Fully Vaccinated Workplaces for April 1 – June 30, which better illuminates the path forward for theater companies whose members are fully vaccinated, but all producers must submit safety plans to Actors’ Equity for approval.

At Northern Sky Theater, Artistic Director Jeffrey Herbst has received Equity approval for the first postpandemic, in-person show in Peninsula State Park – The Fisherman’s Daughters – but performances in the park required a second set of approvals from the state’s Department of Natural Resources (DNR).

“Eric [Hyde], the new superintendent, has experience working with arts organizations, and he and Missy [VanLanduyt] really lobbied for us,” Herbst said.

As for the remainder of the season, including shows at Northern Sky’s indoor Gould Theater, “Equity is approving shows on a show-by-show basis,” said marketing director Ann Birnschein.

Both stages will operate at a limited capacity to allow for social distancing, and at the time of this article, Birnschein confirmed that would mean 350 seats in the park. Although audience members will most likely be required to wear masks, a fully vaccinated company would allow for actors to perform as usual on stage.

One big change that patrons should expect as a COVID-19 safety precaution at Northern Sky is that tickets will be available online and by phone only. “We would sell half of our seats at the door,” said Birnschein, “but it’s part of the safety plan with Equity and the DNR.”

Third Avenue PlayWorks (transitioning from its former name, Third Avenue Playhouse) will get a bit more time to iron out its season plans while working to complete the top-to-bottom renovation of its theater sometime in August.

In the meantime, the plan is to continue to produce virtual content – including a new series that focuses on stories from Door County natives – until a larger season of in-person shows can begin in October.

“It will be sort of like a soft opening for the new space,” said managing director Amy Frank.

Door Shakespeare has announced a one-show season with a solo-actor performance of Hamlet running June 30 – Aug. 17.

“We had preliminary design documents for a 17-person production, so we decided, ‘Let’s keep moving toward a production of Hamlet,’” said artistic director Michael Stebbins.

“Equity requires a lot of precautions, and we’re looking at CDC guidelines as well,” he said. “Weekly testing, a massive amount of supplies, and a CCO – COVID compliance officer – must be at all rehearsals, enforcing safety protocols.”

When the company added all of the costs together, a one-actor show made sense.

“If people haven’t seen one before, I highly recommend they do,” Stebbins said. “As much work and detail goes into it as any larger production.”

Currently, Door Shakespeare is requiring the audience to wear masks in accordance with Equity guidelines. Audience members will be in socially distanced “pods” so families can sit together, but with distance between groups; and there will be a recorded performance that audience members can watch remotely if they’re not comfortable seeing the production in person.

At Peninsula Players Theatre, the process has been more complicated. The Actors’ Equity Association is a union, and although it does certainly have guidelines for audiences this year, conditions for the actors and company members are its top priority. Because the Players’ space has living quarters and a dining facility for the actors and crew on the premises, it has additional layers to its approval process.

Recently the Players were awarded three Door County Emergency Response Fund grants to help the theater company acquire the necessary technology to launch its 2021 season, including updated ventilation, and currently, Peninsula Players Theatre is planning for a July 20 start date for its season.

“While we are not prepared to share specific show titles at this time,” Kelsey said, “[we] have acquired the rights to the shows we want to produce, and we couldn’t be more excited to share these stories with you.”

Although prospects are largely hopeful regarding live theater’s return this year, the professional theaters in Door County are in an unusual position: The earliest Broadway shows have opening dates in mid-September, so summer theaters are going to take the first step into the unknown. But, with patrons excitedly looking forward to seeing their favorite performers back on stage, theater companies will have plenty of support from fans.

“It’s a lot of work to accomplish all of this, but it’s all worth it,” Stebbins said.