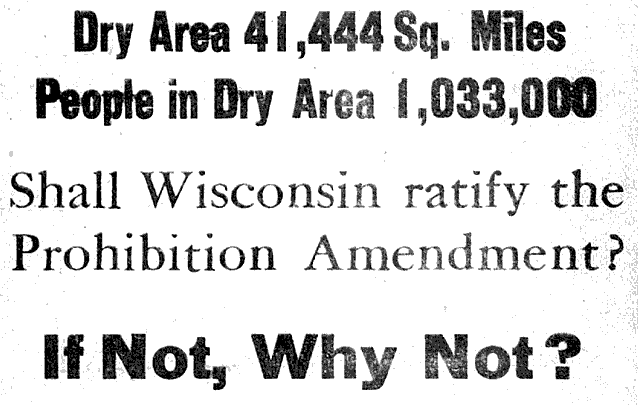 A pro-dry group took out advertisements in local newspapers advocating for Wisconsin to ratify the 18th Amendment.

Wisconsin’s first attempt at prohibition occurred when the question of whether the legislature should enact a law prohibiting the sale of liquor in the state was submitted to a vote. It passed by a vote of 27,579 to 24,109. In 1855 the legislature enacted a law prohibiting the sale — but not the manufacturing — of liquor and Governor William Barstow vetoed it.

The legislature passed the Graham Law, which made tavern owners responsible for selling liquor to known drunks. Milwaukee’s city attorney challenged the law but the Wisconsin Supreme Court held that the legislature had the right to regulate the sale of alcohol. The proposal was named after Alexander Graham of Rock County, who proposed the bill.

The Graham Law was replaced with a milder compromise that encouraged tavern owners and temperance advocates to prevent drunkenness.

Wisconsin Branch of the Anti-Saloon League was founded.

Local option proposal fails in Wisconsin Legislature; “residence districts” allowing small areas to vote the area dry are created; Legislature bans liquor licenses within one mile of the University of Wisconsin campus and increases penalties on alcohol in dry areas.

A Methodist periodical reported 789 “dry” towns and villages in Wisconsin.

Legislature banned youth under age 21 entry into saloons, increased penalties for sales to intoxicated patrons and banned sales to those below the age of 18. All but Baileys Harbor and Nasewaupee vote to go dry in the April elections. Sturgeon Bay goes dry by 37 votes.

Ratification of the 18th amendment began in 1918. In Wisconsin, a significant portion of the state had already enacted local ordinances to restrict the sale of alcohol. A handbill in the collection of the Wisconsin Historical Society announces that 75 percent of the territory and 44 percent of the population had already voted itself dry.

Wisconsin voters approved a referendum amending the Volstead Act that allowed the manufacture and sale of beer with 2.75 percent alcohol.

Wisconsin Senator John J. Blaine (above) proposed a Constitutional amendment for the repeal of prohibition. The U.S. Senate modified Blaine’s resolution to satisfy anti-prohibitionists and passed the measure without delay. On December 5, 1933, the 21st Amendment was ratified and national prohibition ended. On April 25, Wisconsin became the second state to ratify the 21st amendment to the Constitution, repealing the 18th amendment. On December 5, Prohibition ends when Utah becomes the 36th state to ratify 21st amendment.

Ephraim voters end the 163-year-old dry tradition in the village by voting to allow the sale of wine and beer.