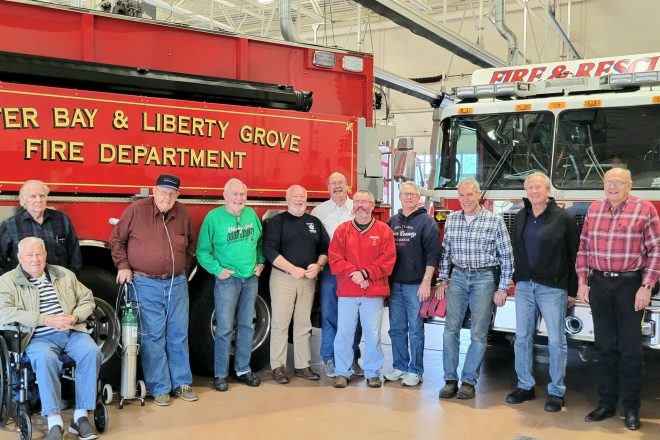 When the COVID-19 pandemic appeared on the doorstep of our county, Chris Hecht didn’t take a wait-and-see approach. Before most municipalities had acted, before the legislature lifted a finger, before the governor issued a stay-at-home order, the Sister Bay/Liberty Grove fire chief convened a meeting of Door County fire chiefs to figure out what they could do to help their neighbors. There was no mention of politics or optics – just the welfare of the community.

From that meeting in the Egg Harbor Town Hall grew the Door County Emergency Support Coalition, which helped to feed people, answer questions and calm the community throughout the early months of the pandemic.

The coalition was just the latest demonstration of the role that local fire departments have played throughout the history of a peninsula whose residents have long exhibited self-reliance as a defining characteristic.

Now Hecht has another mission: preserving the history of the departments he is so proud of.

On Nov. 13, Hecht convened a Northern Door Fire Chiefs breakfast at the Sister Bay/Liberty Grove Fire Department to announce a new oral-history project that will collect the stories of those who have served, past and present. It’s a project Hecht said is growing more urgent with each passing day.

“We’re watching the history of the department fading before our eyes,” he said as he looked at a room full of the graying hair of several dozen retired firefighters. It was a room full of a wealth of information about the history not just of the department, but of a village, a town and a community. But Hecht worries that if those stories aren’t captured now, they’ll soon be lost to time.

“Preserving our history goes way beyond collection and documentation,” Hecht said. “This project honors the people of our community and gives life to the links between our past and present. It’s something we plan to share beyond the walls of our fire stations.”

Hecht held a copy of the Sister Bay/Liberty Grove fire department financial report covering 1952 and 1953. He began reading the names of people who had responded to calls – a simple roll call – but as he read the names, it unearthed nicknames, connections and stories from the retired firefighters in the room.

Few names were read that Gerald Knudson didn’t remember, or the nickname the person was better known as. Niles Weborg could trace his family through the list. For Weborg and others in the room, the names were a tapestry of the fathers, uncles and cousins who built the town they inherited.

“Back then, we met once a month and washed the trucks, sometimes went for a ride,” Weborg said. His father would contribute a case of beer, and that made it a meeting.

Today’s volunteer fire departments are a far cry from those remembered that morning, from the equipment to the training to the trucks.

There weren’t cell phones or pagers back then, for one thing. When Greg Casperson was a kid, the emergency calls came in to his father Clyde, who served as fire chief and funeral home director. Clyde would dispatch his boys to the fire station to sound the siren atop the fire station and write the location of the fire on a blackboard. The siren could be heard out in the country, and anybody who wanted to respond could join the fight.

Lee Telfer recalled seeing a 16-year-old kid walk by the firehouse once as he geared up.

“Want to go to a fire?” Telfer asked, in need of extra manpower. Moments later, young Dick Burress was responding to his first call.

The Sister Bay/Liberty Grove Fire Department Oral History Project will start with a focus on one department, but Hecht hopes it will serve as a model and inspiration for each department to collect its own histories.

Hecht has enlisted the help of Maryanne O’Dowd to serve as the project’s director and facilitator. The Peninsula Pulse and Write, On Door County, as well as local historical societies, have also been enlisted to support the project. O’Dowd hopes to complete the work in time for 2022’s National Fire Prevention Week, Oct. 9-15.

Anyone who served, has connections to former members of the department or has historical information is encouraged to contact O’Dowd at [email protected].