A documentary called PROJECT: ICE started out as a testament to the historical railcar ferries that shipped goods around the Great Lakes, but that focus didn’t last.

“We came to realize there was a greater story to be told,” said William Kleinert, executive producer of PROJECT: ICE. “We have over 23 different people we interview in the film, climate change kept coming up over and over again. It became a much bigger part of the story than we initially conceived it would be, and it really has become a central point to the film.”

Winter ice cover has dropped in the last 40 years, a trend that affects all those who live near the Great Lakes, play on them, or rely on them to make a living. With so many people calling the Great Lakes region home, that ice loss is hard to ignore. 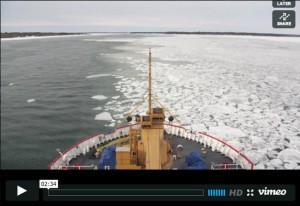 Watch the trailer at http://projecticemovie.com/

While many other documentaries have shown impacts of climate change, PROJECT: ICE aims to do it in a new way. Rather than focusing on ice melting in the arctic, It follows stories about Great Lakes commercial ice anglers, kite skiers, dog sled racers, scientists, historians and more, in order to show how many people are affected by the climate-caused changes to the Great Lakes.

“The difference between looking at the arctic or Greenland or Antarctica is those are areas that are virtually uninhabited,” Kleinert said. “The Great Lakes is home to 40 million people. So it’s quite a different impact that ice and the diminishment of ice over all is having for people in this highly inhabited community versus ice that’s disappearing at the poles.”

Kleinert and his co-producer Kevin Kusina want to raise awareness of climate change’s impacts on the Great Lakes by showing the film to audiences around the country, which could lead to more environmentally conscious action.

“They might not be familiar with what’s going on,” he said. “They might not be seeing the decreased ice and dramatically decreased water levels and they might not understand the importance and impact that’s having on shipping, on fishing, fisheries and on other aspects of recreation and commerce throughout the region. We are shining a light on that and we hope people will pay attention to it and we hope policy makers will pay attention.”

Project: Ice has been shown to private audiences in Washington, D.C., northern Michigan and Los Angeles, and will be shown in film festivals in 2014. Kleinert hopes the film will be widely available late next year.