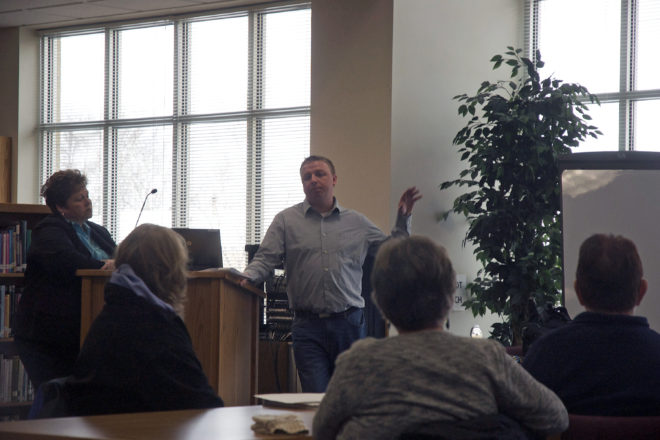 Southern Door School District Business Manager Mark Logan explains why the state’s school funding formula is forcing the district into an operational referendum during a meeting at the school on Feb. 4. Photo by Jim Lundstrom.

Just three days after Gov. Scott Walker announced expanded aid for rural schools, the Southern Door School District held a public forum to discuss why it needs to hold an operational referendum in the April election.

“Unfortunately, a lot of the initiatives don’t affect us,” said district Business Manager Mark Logan about the governor’s announcement for rural schools. He pointed out that one of the governor’s initiatives is to help with the high cost of transporting students in rural districts.

But the Southern Door District runs a lean bus service that is below the state average in operational costs.

“If we ran it less efficiently, we would qualify,” Logan said.

Logan and Southern Door Superintendent Patricia Vickman led the meeting which was attended by about 20 people, including Southern Door School Board members, as well as parents and grandparents of students attending the school, and most of them were Southern Door alumni.

They explained why the state’s funding formula continually shortchanges the Southern Door district. The school funding formula is based on property value, not family incomes. Districts with low land values receive higher state aids. The Southern Door School District has some very valuable property within its 200 square miles of coverage area, making it the 79th wealthiest (in property value) school district out of 400 in the state. But that does not equate to the reality of incomes of residents in Southern Door. Because the Southern Door District is considered a “wealthy” district, it receives less state aid.

Vickman said there is some light being seen at the end of the tunnel with Rep. Joel Kitchens, a former school board president, chairing a committee to look at the school funding formula, however Vickman said Kitchens attended a recent school board meeting and warned that no one should expect any significant changes in the next two years.

They then showed some comparisons with other schools. The state average for state aids stands at 48 percent of a district’s revenue. State aid makes up only 20 percent of Southern Door’s revenue.

Vickman said State Superintendent of Public Instruction Tony Evers does have a proposal that would base aid in part on income levels of residents, but it hasn’t gotten anywhere yet, and Evers is facing challenges in the April election.

Vickman and Logan said the school has learned to operate lean and efficiently, but they have also had to cut some programs (such as the Gifted & Talented program), teacher salaries and benefits. And then there are the increasing number of unfunded state and federal mandates the district must implement.

Vickman said mild weather has been a blessing because it has cut down on heating and snowplowing costs for the district. She also mentioned aggressive grant writing that has brought more than $300,000 to the school, but added that you can’t fund staff with grants, and grant writing is not a sustainable way to run a school.

So, in order to maintain programs and services at their current level, the district is seeking approval of an operational referendum to raise $936,000 through local taxes for each of the next two years. Vickman said that amount is exactly what is needed to cover the proposed deficit in the first year, and added that the deficit is even higher in the second year, but the board was being very conservative in asking for the same amount and hoping for fiscal relief elsewhere.

The district last went to voters in 2014, with a non-recurring referendum request for $390,000 that was approved.

Vickman said as with the last referendum campaign, she will attend town and village board meetings within the district in order to talk to voters directly about the school’s needs.

The Washington Island School District is also asking voters to approve a two-year non-recurring referendum in April. The district is asking for a $538,000 revenue cap override for the 2017-18 school year and $570,500 for the 2018-19 school year.