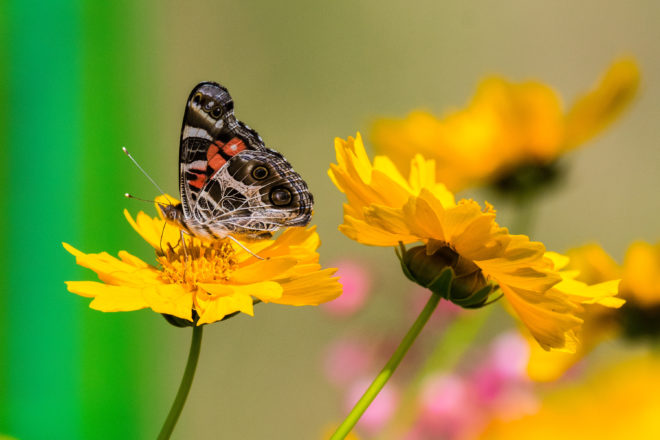 We all love honeybees. These very special insects make honey and wax. They also pollinate flowers that enable plants to make seeds, and in the process, produce many of the fruits, nuts and vegetables we use for food. And we can plant their seeds to grow new plants.

This information, which we all learned in grade school, is true but far too simplistic. Pollination, it’s complicated.

Honeybees are not native to North America. European immigrants brought them to the American colonies in the 1600s. Presumably, it took a number of years before honeybees reached Wisconsin, probably even longer to reach the peninsula. So, before there were honeybees, what pollinated our native wildflowers?

Understand that before European settlement, the Door Peninsula was heavily forested. The vibrant summer and fall wildflowers of our fields and roadsides were less common back when there were no fields and no roads. But the exquisite woodland wildflowers –think trillium, hepatica, bloodroot and dozens more that make our springtime so special – need seeds to reproduce and would have been pollinated by native bees and other beneficial insects. 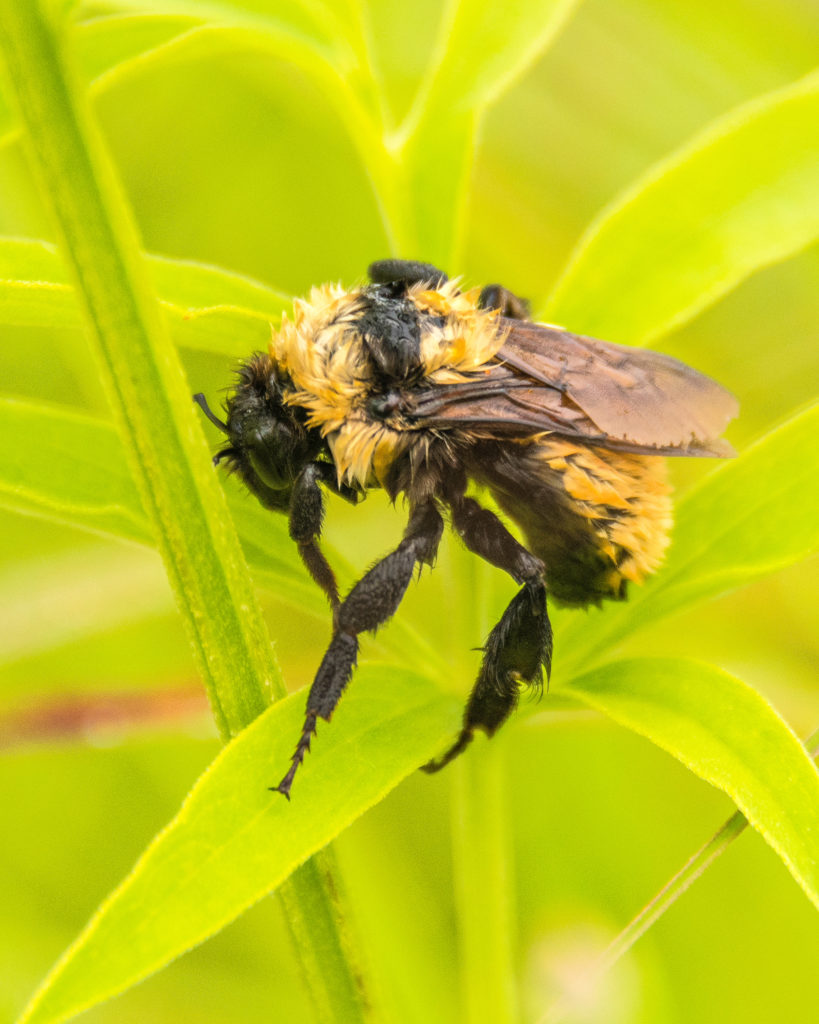 Do native bees look like honeybees? Some do, but many don’t. Do they visit the same flowers? That depends on their size, the length of their tongues, and their methods for collecting pollen. Just as each species of plant is unique, each species of bee has unique characteristics adapted to gathering food from a specific type of flower.

Honeybees are highly organized social insects with up to 60,000 and sometimes even more individuals sharing a hive. When worker honeybees visit flowers, some specialize in gathering pollen, but the main function of most foraging honeybees is to collect the nectar which the bees convert into honey to feed the colony during the winter.

In contrast, our native bumblebees live in much smaller colonies with 300 or 400 to a den.

Most native bees are solitary, living alone underground or else, near the ground under bark or in the stalks of dead plants. They collect some nectar, but because they do not make honey, they visit flowers primarily to collect pollen. Each species specializes in certain flower types and pollen-gathering strategies. Because they concentrate on gathering pollen, they seem to be far more efficient at pollination than nectar-gathering honeybees.

Do native bees compete with honeybees? Perhaps they do when flowers are scarce due to agricultural practices, habitat destruction or drought. More research is required to answer that.

But surprisingly, research has revealed that native bees seem to make honeybees more efficient. In a study on sunflowers done at University of California – Berkley, researcher Sarah Greenleaf explained, “We know that a lot of the honeybee pollination happens because of their interactions with wild native bees. This means that wild bees are much more important than we previously thought. ”

Apparently, honeybees are annoyed when native bees are working near them, so they buzz off to other flowers, pollinating significantly more flowers than they would if they were calmly foraging beside their own bee sisters. In the California fields, according to researchers, “by provoking honeybees to alter their behavior, wild bees are indirectly responsible for an additional 40 percent of the pollination.”

Wild bees are similarly annoying to honeybees in Midwest fields and orchards. This means when native bees are foraging in the same area as honeybees, a more bountiful crop is produced.

In an article in Wisconsin Natural Resources magazine, David Sperling wrote:  “One increasingly common strategy of farmers who are hedging their bets by bolstering native bees is to increase the natural growth of grasses, shrubs and trees surrounding their fields…

“These buffer zones of natural vegetation provide food and shelter for more native bees and increase bee visits when their crops set flowers. Pressure from native bees also can make honeybees more efficient and effective when pollinating hybrid seed crops by causing honeybees to move more frequently between rows of male and female plants.”
Wild Ones of the Door Peninsula is an organization that “promotes environmentally sound landscaping practices to preserve biodiversity through the preservation, restoration and establishment of native plant communities.” To preserve native plants, local Wild Ones understand that they also must protect native bees.

So the local Wild Ones charter is bringing the Minnesota researcher who wrote the award-winning book, Bees: An Identification and Native Plant Forage Guide. Heather Holm will present the lecture “Attracting Bees and Beneficial Insects with Native Plants” at 6 am, Aug. 24 at Crossroads at Big Creek. Bee Keepers of Door County, Sustain Door, and Door Property Owners are co-sponsoring the event.

Coggin Heeringa is the director of Crossroads at Big Creek and also sits on the Board of Wild Ones of the Door Peninsula.

Wild Ones promote environmentally sound landscaping practices to preserve biodiversity through the preservation, restoration, and establishment of native plant communities. For more information on this nationwide organization, visit wildones.org.

Most insects have a positive impact in our landscapes. Native plants can be selected to attract specific bees and beneficial insects including predatory and parasitic wasps, beetles, flies, true bugs, and lacewings. Learn about the predator-prey relationships of these flower-visiting beneficial insects and how they help keep problem insect populations in balance. The lifecycles, diversity, and nesting habitat of native bees will also be covered along with examples of native plants for different site conditions. This program is free and open to the public. Collins Learning Center at Crossroads.