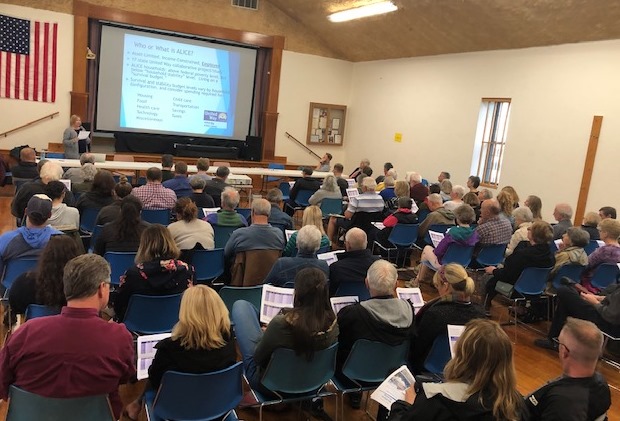 If the turnout in Sister Bay on May 21 is any indicator, many residents are interested in learning more about the challenge of attainable housing, and most are willing to collaborate on solutions. It was also great to see the Village of Sister Bay’s elected officials in attendance because we can’t solve this without engaged officials at the municipal and county levels.

By the time this is published, Door County Economic Development Corporation’s (DCEDC) Attainable Housing Committee will have completed additional presentations in Sturgeon Bay and Southern Door.

This committee has been in place for more than a decade and comprises representatives from both the public and private sectors.

The presentations’ goals were to increase awareness of the local attainable-housing problem, Door County’s demographic challenges, and economic trends during the past decade; and to increase understanding of the economic realities faced by some who live and work here. Interfaith Prosperity Coalition has developed a video that gives voice to some who were kind enough to share their stories. An abbreviated version is available at youtube.com/watch?v=m6pBLCp3_4g.

What are some of the challenges?

One is the cost of construction. Considering the nature of our geography, it has always been more expensive to build here, and costs have increased since the implementation of tariffs starting in early 2017. Lack of infrastructure is also a challenge. It’s more economical to build on sewer and water, and those amenities are limited here.

What is attainable housing?

The words “attainable,” “affordable” and “workforce” are often used interchangeably, but the general definition is “housing – including utilities and other basic housing-related amenities – that costs no more than 30 percent of gross household income.”

In Sturgeon Bay, several fine developers are already making investments: 168 apartments have either been completed in the past few months or are in some stage of construction. This housing is needed and appreciated, but not all of it is within the definition of attainable housing.

The Door County Housing Analysis, developed by a third party, states that by 2023, central Door County (including the city and the Towns of Nasewaupee, Sturgeon Bay and Sevastopol) will need about 300 apartment units that meet the criteria of workforce housing. In Northern Door County – the area north of Sevastopol, including Washington Island – a win means that by 2023, we will have added about 200 apartment units that meet the criteria for workforce housing.

But this targeted housing development certainly will not mean that, for example, a large apartment complex will be built in Ellison Bay! It’s important that workforce housing is walkable within a municipal district, and that housing reflects the nature of the location in which it’s built.

There is also a significant need for senior apartments, owner-occupied housing and seasonal housing.

Next week, I’ll offer suggestions about how people can help solve the need for attainable housing.

With housing in mind, I extend DCEDC’s thanks to Dan Tjernagel, Bob Nickel, Bob Jaeschke and Seth Wilson for their leadership with the High School Home Construction Program; and to the five students from Sturgeon Bay High School and one from Sevastopol High School who invested nine months in the program. Because of their efforts, today a family is enjoying a great new home in Door County – the tenth built since the program started.

DCEDC will be developing the Youth Apprenticeship Program to support even more of our youth through connections to jobs, including those in the home-construction industry. We’ll keep you informed about our progress.