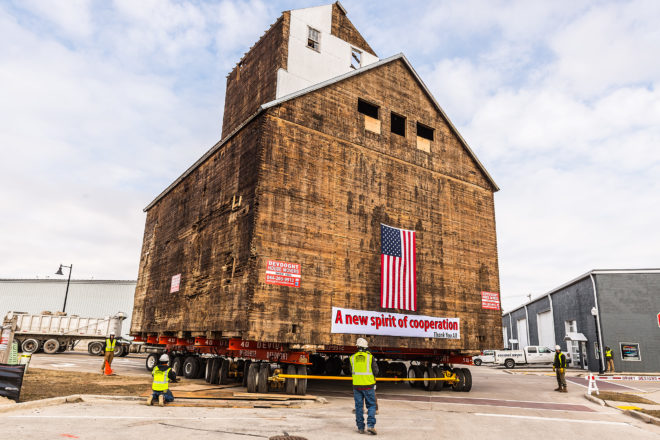 For a long time, I couldn’t get excited about the Teweles and Brandeis granary in Sturgeon Bay. A few years ago, many people I admire were vehement about the need to save this 120-year-old structure from destruction, yet others I respect were equally certain that it has no place in our future. Frankly, I just didn’t have strong feelings either way. The granary simply wasn’t a part of what I love about Door County.

When I reflect upon what I treasure about life on this peninsula, I think of Door County’s natural beauty and performing arts. Door County is an uncommon combination of environmental and cultural treasures that is the envy of many cities, yet this treasure trove is situated in our small towns, where neighbors still know each other’s names. It’s what I love most about this place.

I was never opposed to saving the granary; it just wasn’t very important to me.

But I work for the Door County Community Foundation, and preserving the granary is extremely important to several of our donor families. Ultimately, the Community Foundation’s board of directors agreed and unanimously voted to support the effort to preserve the granary.  Regardless of whether I was excited, it became my responsibility to help make the dream of restoring and rejuvenating the granary a reality. And I can remember the precise moment when my entire perspective on this project changed.

It was the morning when the granary was being moved across the bridge, back to its original location. I was standing inside the fenced area, watching the building movers do their job, when I glanced over my shoulder. Standing against the fence looking in, almost like smiling little kids watching their first real baseball game, were several members of the Northeast Wisconsin Antique Power Association.

Their charity is commonly referred to as NEWAPA, but you likely know it as the group that organizes the Valmy Thresheree. This massive, three-day event is put on by Door County’s farm families to celebrate the agricultural heritage of our community. It includes an antique tractor pull, barn dance, parade of antique machines, chainsaw competition and even a polka mass. During this year’s event, to be held Aug. 20-22, perhaps as many as 10,000 people will visit the 40 acres of the Valmy Thresheree to celebrate the history of farm life in Door County.

For NEWAPA members – several of whom were standing at the fence that morning – the granary is an important part of the past.

Don Rudolph, one of NEWAPA’s officers, later told me that his grandfather, Julius Karl Rudolph, moved in 1899 from the German Settlement in Liberty Grove to the better farmland of Sevastopol and hauled countless horse-drawn wagons filled with grain to the granary in his day. Don’s father, Edgar, continued the tradition, and Don himself did business at the granary location until it finally closed.

That morning at the fence, I recall encountering one much older man who was crying. He said it gave him great comfort to know that the granary that had towered over our community long before he was born will still be looking over all of us long after he is gone.

Although the granary isn’t part of my Door County experience, it is central to the experience of many families that called Door County home generations before my wife and I settled here.

“The granary is one of the last vestiges of a once-vibrant agrarian business community that included sawmills, flouring mills, grain elevators, pea canneries, pea warehouses, cherry- and apple-processing facilities, an ice cream factory, implement dealers and other supporting businesses,” Don Rudolph said. “As one of the last standing ag-related buildings, it deserves to be preserved to honor Door County’s agricultural heritage.”

The Valmy Thresheree property is a little more than 10 minutes away from the shops of downtown Egg Harbor. For generations, the tourism-based part of our economy has lived right next door to our farm families, yet sometimes it feels nowadays like these neighbors don’t talk to each other very much anymore. Yet we are still neighbors.

The granary is important to me not because I have some fondness for the building, but rather, because it is important to many families that settled and built the county that my family now enjoys. Although I might be ambivalent about a thing, I choose to care about that thing precisely because it’s important to my neighbor. It’s what good neighbors are supposed to do. This is what it means to be a community.