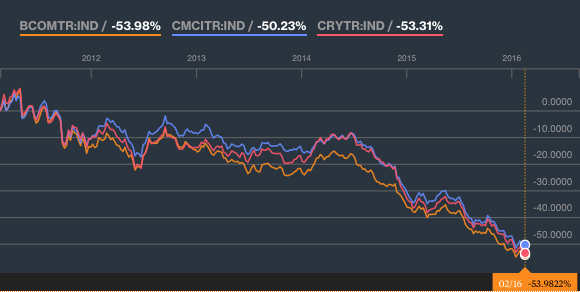 Commodity prices have decreased around 50 percent in the past five years, with oil making up a majority of that downfall. Source: bloomberg.com

Almost all of the graphs showing prices of commodities such as metals, agriculture and energy look like a bumpy slide going further down as the days go on. It’s true that gold is seeing big gains given its implied safety in a volatile market. Lean hogs are also doing well, likely due to their worldwide production and ability to be used for everything from food to medical supplies. But, on the whole, commodities are crashing.

The biggest effects of this will be seen in export-heavy countries. Australia’s mining boom has turned sour after China’s economic slowdown brought demand for metals to a screeching halt.

Decreasing demand leads to decreasing prices. Decreasing prices typically means decreasing profits. So developing countries in Africa and South America, which are still rich in natural resources given their slower development, will see the most dramatic decrease in their coffers as their products are selling for less. Ignoring the global economy by continuing to pump out these goods at higher and higher rates to make up for these shortfalls will only bring prices down further. This is seen with oil prices in the Middle East, as those countries continue to produce oil in an already oversupplied market. Although Russia, Qatar, Venezuela and Saudi Arabia agreed to freeze oil production this week, they are doing so at record high production levels while Iran and Iraq continue pumping at higher and higher rates.

In the world of agriculture, these decreasing prices have effects on the United States economy as well. A slump in crop and livestock prices have brought the price of land down by four percent in each of the last two years and those declines are expected to continue through the spring. When the land that a farmer has and the goods produced on that land are both worth less than they were yesterday, that farmer is facing some financial distress. They may turn to bank loans to make up that ground, but with banks knowing that the farmer’s product isn’t worth much right now, those loans are harder to secure.

On the surface, these decreasing commodity prices might be good for consumers in the short term. Gas prices are low, meat prices may decrease as farmers turn away from low-earning cash crops, and manufacturing may find their raw materials for cheap. But a pinch at the production level could trickle down to job loss and the closing of businesses in the long term.