The Wisconsin Assembly is considering a bill that would remove restrictions on where municipalities must publish legal notices.

The Assembly Committee on Rural Development and Mining heard testimony about the bill at its Jan. 4 hearing. Kitchens said he wrote the bill because he is in favor of open government and educating as many constituents as possible. He said the reach of traditional paid newspapers is declining while other newspapers are emerging as primary sources of information in his district.

The Pulse “is a sterling example of a newspaper having great success using a different model,” Kitchens said. Meanwhile, subscription-based newspapers in his district continue to cut staff, print fewer pages, and publish less local news about their communities.

“They become more and more reliant on these taxpayer subsidies, legal notices,” Kitchens said. “These papers would have a tough time without these. We’re basically subsidizing mediocrity.” 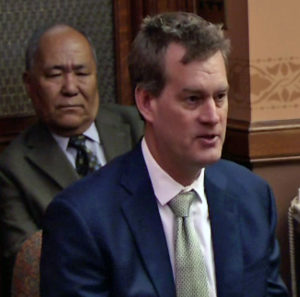 Peninsula Pulse Publisher David Eliot testifies in Madison on Jan. 4 before the Committee on Rural Development and Mining on Assembly Bill 731 regarding newspaper legal notices. Image captured from wiseye.org.

Peninsula Pulse publisher David Eliot testified in favor of the bill that would allow his newspaper to compete for legal notices in communities that do not have a newspaper with a bona fide paid circulation base. That would allow the Pulse to compete in 18 Door County municipalities, but not in the City of Sturgeon Bay or for the County of Door.

“People say newspapers are dying,” Eliot said. “You look at the Advocate and the Kewaunee Star, and that’s their evidence. The publishers of those newspapers are killing the industry and you’re subsidizing it.”

Eliot pointed out that his publication has grown for 20 years without legal notices as a revenue stream. He said he simply wants to be able to compete to be the newspaper of record for his community. While the bill takes a step in that direction, he said it does not go far enough.

He said the best step would be to remove the stipulation for paid circulation in all instances.

Pulse news editor Jim Lundstrom also testified at the hearing, lamenting that his employer cannot compete for paper of record status solely because it does not charge for its publication.

“This statute flies in the face of the centuries old intent of public legal notices to disseminate important public information to the widest possible audience,” Lundstrom said.

He pointed out that the surrounding states of Iowa, Minnesota, and Michigan all allow free newspapers to compete for paper of record status.

Sheboygan County Clerk Jon Dolson said the bill would help municipal clerks. He said current statute forces him to spend money on paid legal notices with the bona fide circulation newspapers that go to a fraction of his community while a free weekly is delivered to 98 percent of county residences. He said the paid newspaper circulation has dropped almost 20 percent in the last four years, and at the last spring election, it printed 9,000 election inserts for a city of 50,000 people.

“One of my goals as county clerk is to get more people notified and educated on elections and to drive up voter turnout,” he said. “One way to help achieve this goal is to allow counties and municipalities to use more options for notifications. This gives options.”

Representatives from Stevens Point and Reedsburg said they’re seeing a similar story play out in their own communities.

Rep. Katrina Shankland of Stevens Point said she has seen local coverage by the newspaper conglomerate in her district decline. She referenced Assembly Bill 70, which would go further and require only that legal notices be published online. She said that would provide “way less opportunity for people to know what’s going on in their local government,” particularly senior citizens.

While the bill does not completely level the playing field for free and paid newspapers, Kitchens said he hopes it lays the groundwork for further evolution within the Wisconsin Newspaper Association, which bills itself as the “single point-of-contact for working with newspapers in Wisconsin.”

“My hope is that the newspaper industry will themselves recognize this and advocate for further change,” Kitchens said.

After the hearing Kitchens said he was confident he had the support of his assembly colleagues and would speak with Senate Majority Leader Scott Fitzgerald, a former newspaper publisher.