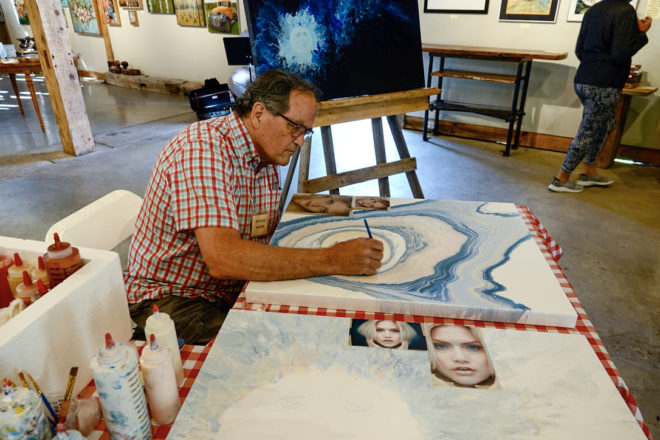 As Michael Harper puts paint to canvas, he creates vibrant, abstract expressions – his painting titled “Lioness,” for example, is an explosion of dancing, warm tones – but he rarely uses a brush.

Instead, he works with liquid acrylics that he applies with squeeze bottles, like the kind you might find containing condiments at a diner. For “Lioness,” he saved the brushwork for the face that he placed in a swirl of color from the squeeze bottle, making the piece look like a huge cloud.

Harper said his work is inspired by nature and Door County landscapes, but he does not wish to create starkly realistic images.

“There’s a sense of place in the landscapes,” he explained, “so people who know the area will recognize some of these.” For example, he’s created a few paintings with a bluff like one that he sees across the bay in Ephraim.

Another theme is emotional states, such as a painting of his wife at 19 titled “From the Beginning,” which is about falling in love at first sight. Other abstracts with gold leaf are reminiscent of Japanese moon paintings in which he shows a gold-leafed moon rising through an abstract garden.

Harper recently retired from a career in Milwaukee, where he and his wife ran Talent Genesis, a consulting company that helped organizations develop their leadership. They’ve since moved to a home in Gills Rock, purposely seeking a very quiet spot in an increasingly bustling county.

Harper works along the border of chance and control.

“Working with high-flow acrylics is unpredictable, largely uncontrollable, and watching them evolve is magical. You can’t help but watch with wonder as they continue to grow Fibonacci-like fractal patterns over the top of the fluid acrylic base,” he notes on his website.

Harper pours or squeezes the paint onto the canvas and then sometimes blows it around with a hair dryer or air brush, tips the canvas to direct the flow, or draws through the paint with a skewer to create the effect of waves or currents.

He also dips small canvases or wood panels face down into pools of paint that accumulate on plastic sheets that he lays across his table, then lifts them out gently.

“You see how it gets a feather effect?” Harper asked. “That results when you lift it from one edge up like this. It creates a feathering pattern strictly through the physics of lifting the paint and having it pull apart.”

Although he describes his work as using three techniques – pouring, blowing and lifting – some of his most striking elements are created with traditional, representational painting techniques such as the ones he uses for the faces in some of his work.

The image of his wife at 19, for example, is the basis for the faces in several paintings, but in other cases, he uses images from publications as his starting point. And his fractals probably deserve a category of their own because the high-flow acrylics create works that are largely uncontrolled.

By contrast, Harper’s sculptures – in wood that has already been cut or has fallen – are often rooted in the discovery of shapes and textures that he arranges on a base and sometimes enhances with bits of gold leaf. In other sculptures, he shapes the wood and combines pieces in free-standing or hanging mobiles or stabiles that recall the work of Alexander Calder but have the warmth of wood rather than the coldness of steel, which Calder used most often.