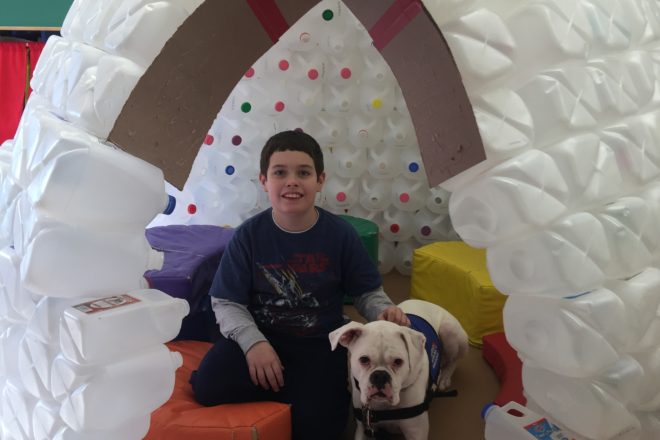 Door County Library Youth Services Librarian Beth Lokken wants to give local children the chance to read their library books in the comfort of an arctic-style home at the Sturgeon Bay branch, but she needs the public’s help to make it happen.

Since September, Lokken has collected 250 one-gallon juice, milk and water jugs for the construction of an indoor igloo for the children’s area. As of now, she is halfway to her goal.

“Five hundred gives us enough for a dome that’s about seven feet in diameter,” Lokken said.

This will be the second consecutive winter that Lokken has gathered up jugs for a hut. Last year, she collected them and constructed the igloo in time for Valentine’s Day, giving the library’s visitors – little and not-so-little – about six weeks to enjoy the room within a room.

“We put pillows and things and squishy stuff on the inside and then kids were able to go and sit. Because it’s this white plastic, the light comes through beautifully so it’s a bright space on the inside,” Lokken said. “…We fit three teenagers. We had seven kindergarteners, and about four or five mid-range kids. It depends how close they want to sit, too. We actually had one school visit where 10 little people crammed themselves in. They all wanted to be inside.”

Construction of the igloo is simple: after cutting out a seven-foot circle, it’s all hot glue and jugs. Because of the jugs’ shape, the form curls in over time, helping form the round signature edges of an igloo.

“It took a team of three people using glue guns and trading off because it hurts your hand after awhile to squeeze a glue gun but it took us two hours with three teams,” she said. “There were about nine or 10 people and the kids ran back and forth with more and more containers and more glue sticks for everybody. The grownups and teenagers used the glue guns. It was really a blast.”

Anyone interested in contributing to the project can bring jugs to the Sturgeon Bay Library. Lokken requests that jugs that previously contained milk or juice be washed out with soap and water before being dried and dropped off. Once all 500 are in, she will assemble a construction team to help put it together.

Once the first month of spring hits and the warming temperatures destroy the snowmen and snowforts of the outdoors, Lokken will invite children and adults to do the same with the indoor igloo.

“Because recycling requires crushing of the containers, what will happen is right around April 1 I’ll put out a thing that says we’re going to be crushing the igloo,” Lokken said. “Come and help me crush all the parts and get them ready for recycling.”

To keep updated on the igloo project, find Door County Library on Facebook.