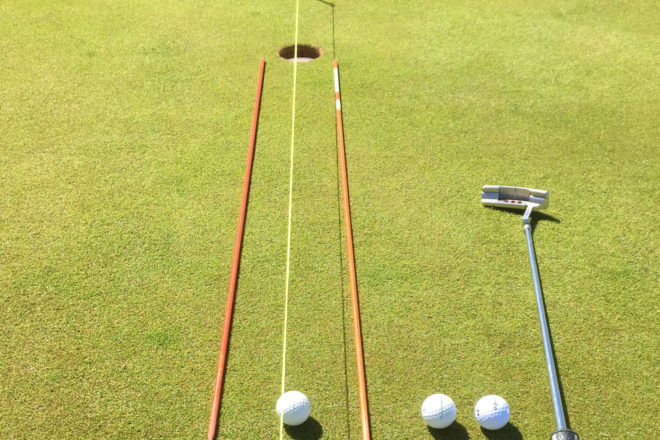 There is an expression in golf that was coined by the great Bobby Locke that says, “Drive for show, putt for dough.” Modern golf statistics try to prove this theory wrong, but with more than 20 years of teaching and coaching the game, I know that tournaments are won and lost with putting and the average golfer will enjoy the game more if they make more putts.

Putting is a game all its own. It is truly the only area of the game that the average player can quickly improve and become nearly as proficient as a tour player. A 65-year-old male golfer with a handicap of 20 may never be able to hit a drive 290 yards like the professionals do, but he can hole 50 percent of his putts from eight feet like the average tour player does. Putting does not require the physical ability and strength that today’s top professionals attain. It simply requires three things:  the ability to hit a putt on a straight line, the ability to hit a putt the correct distance, and the ability to read a putt. Nearly anyone can accomplish these three tasks with some guidance and a lot of practice.

Hit a putt on a straight line

The best way to acquire this skill is to find a straight uphill putt that is four feet in distance. Lay down a chalk line or use two aiming sticks that form a bowling alley effect with the hole being the pins. Then get five of your own golf balls (never use range balls) and putt until you can make 50 in a row. Once you can do this you are able to hit a putt on a straight line. Practice this drill as often as you can.

Hit a putt the correct distance

This is a little more challenging and also a little more important. Take four golf tees and place them in a line three paces apart. Grab three of your own putting balls and place them at the first tee. Putt all three balls toward the second tee, attempting to have them stop as close to the tee as possible without being short. Then, collect the three balls and turn around and putt back to the first tee with the same goal. Repeat and putt all three toward the third tee. Turn around and putt back to the first tee and so on. This is called the ladder drill and has been used by top players and coaches for decades. It is a simple but very effective way to improve your distance control.

This is the most challenging factor in putting and also the most important. If you don’t read the putt somewhat correctly it doesn’t matter if you can hit a putt on a straight line or the right distance. Reading putts is an educated guess. The best way to read putts is to employ a great caddy. Barring that option, if you have the time, look at the putt from both sides. Then, look at the surrounding area and identify the high area and the low areas. Find out if there are any significant features that putts tend to break toward, such as water or a valley. Lastly, imagine pouring a bucket of water where your ball is and visualize the direction the water would drain. These are just a few of the quick and common methods used to improve your green reading.

Spending some time using the drills above will quickly improve your putting, in turn lowing your scores. Learning to read greens, hit a putt on a straight line, and hitting a putt the correct distance are all you need to do in order to “putt for dough.”

Enjoy your practice and the lower scores that follow!