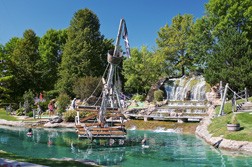 While the notions of work and play are generally viewed as separate activities, for me, Pirate’s Cove Miniature Golf in Sister Bay has embodied both throughout the past three summers. Having played at the Cove as a child, it was a shift of the pirate paradigm when transitioning from the front of the counter to behind the counter, from taking putters to replacing putters. The switch has been great, forging friendships and strengthening relations with co-working siblings. A great boss and close-knit staff are not always a luxury in every work environment. My co-worker of several seasons, Betsy Myer, spoke on her experience at the Cove.

“Having worked at Pirate’s Cove for five summer seasons, it has been really great interacting with our customers on a daily basis. It is always nice to see visitors and families enjoying themselves on the course.”

And oh yeah, the course is a pretty sweet place to play as well. Customers are greeted by a smiling staff and an array of putters, each color coordinating with a different height. A small section of plastic putters lean at the end of the row for young children. Caribbean beats permeate on the course, providing for a relaxed, family-fun atmosphere that is as exciting for a grandparent as it is for a “little pirate.” Snippets of pirate history can be read on every hole while waiting for your turn at each successive hole. 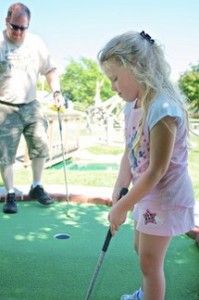 7-year-old Ciara Crawford perfects her putting skills while her father, Jerald, cheers her on. Photo by Len Villano.

Daily upkeep on the course maintains the pristine greens and keeps the cool, blue pond free of debris with colored balls, gone astray from misplaced putts, occasionally dotting various aspects of the pond’s clear complexion. While anytime of the day is fun to play, a round in the sun setting sky is a personal favorite and premier time to play over the back nine. It’s pretty cool how a bright ball and a small putter can be the epitome of a child’s vacation. This nostalgic component of the course has had many a parent approach to tell me that a trip to the Cove was the one activity in the county that their children had been most anticipating.

A game at Pirate’s Cove transcends generations as groups of retirees jovially return with stories of previous games played and the experience of the game they just completed. Excited screams can be heard across the course as both young and old score a hole-in-one, often several scoring on our daily “free-game-hole,” which is a mystery until they return their putters upon completion of their game. Gold tokens are doled out to those who scored on the “free-game-hole.” (Which never expire FYI.) Smiling children (generally speaking) are greeted with bags of “pirate treasure,” small bags of pirate “loot” including eye patches, pirate flags, and more.

The greens always roll smooth and each hole provides a different challenge where experience and skill play a role and…well…sometimes just a dose of good luck to make a successful putt.