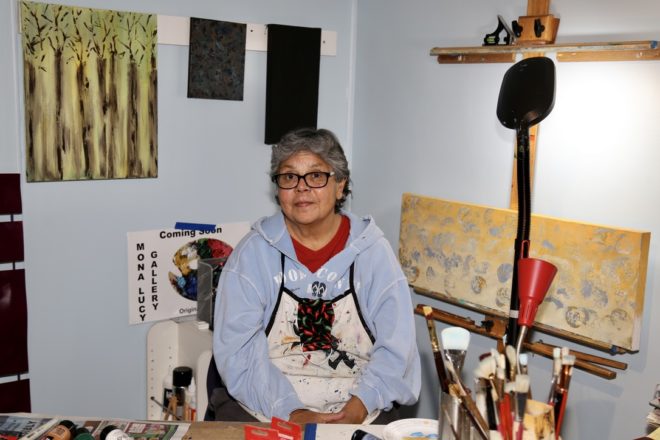 Monica Ramirez on the opening of her Jefferson Street gallery

Jefferson Street in Sturgeon Bay may have lost Bliss to the former Prange/Younkers building, but it has gained a small art gallery and studio a few doors away. The Mona Lucy Gallery is showing the paintings of Monica Ramirez, plus, occasionally, pottery by a friend, Charmain Benton.

She named the gallery after herself in a way.

“Mona is the name everyone in my family has called me since I can remember, and Lucille is my middle name, but I just prefer Lucy,” Ramirez said.

Being an artist has been a lifelong dream, but a career in health care administration running nursing homes and hospice centers in the Chicago area didn’t leave much time or energy for art. She did become certified as an art therapist through a program at Northwestern University, however, and painted when she could.

Three years ago, Ramirez retired and moved to Sturgeon Bay with her partner, Cynthia Germain. They lived in Bay Lofts until moving into a 75-year-old house on Jefferson Street in September.

Ramirez has jumped into the area art scene. She exhibits at the Art Garage in Green Bay, where she’ll have a show next summer, and she’s shown her work at the Miller Art Museum in Sturgeon Bay.

COVID-19 meant that she didn’t have the grand opening for her gallery that she had planned. She opted instead for soft openings in November and is hoping the Sturgeon Bay holiday shopping season will generate some traffic as well.

Ramirez has been coming to Door County for 20 years with Germain, whose parents have a family place near Idlewild, where they now live.

“We’ve always loved it up here,” Ramirez said, “and it was so inviting – so different from Chicago.” She was welcomed into the Art Crawl and used the fourth-floor club room at Bay Lofts to show her work last year, drawing more people than she had expected and selling well.

She finds the county’s artists delightful.

“They made me feel so warm and welcomed,” she said, “and they are so supportive of anything I’m doing. It’s just a great art community. But I’ll tell you that probably one of the most challenging things I had to learn right away was to drive 25 miles an hour.”

Ramirez works mostly in acrylics – which are better than oils for painting in a small space – and mostly on canvas, but she has some work on aluminum on display.

“I mostly do abstract,” she said, “and I try very hard to use texture. I believe art should come off the canvas or paper.”

Her work isn’t subtle – she likes colors, and she paints to blasting disco music.

“I love bright colors,” Ramirez said, “although I must say I have a lot of dark blue in my work, but I think color is the most important thing in my art.”

She decided to open her own gallery because her work – with its abstracts, semi-abstracts and textures – is so different from most of the art in Door County.

“Acrylic is good for texture,” she said. “You just have to use more of it, so it’s a little more expensive.” That’s good news for Artists Guild, where she buys a lot of her paint.

Ramirez has been painting full time for three years – since she moved to Sturgeon Bay – and working at her art so intensively has paid off.

A work isn’t necessarily finished on the first round of painting, she added.

“That piece over there – I may not be done with it,” she said, pointing to an assemblage of black aluminum panels with daubs of bright color. “I just did that this weekend. But it has to live with me for a while, and then I decide. The process for me is to just keep trying to make it my own personality,” she said.

“It’s a little concerning to start a gallery in the middle of this pandemic, I have to tell you,” Ramirez said, “but when it’s your life’s dream … Well, look, I got a studio space – I might as well show my heart to people.”

Margaret Lockwood, whose gallery is on Michigan Street near the Steel Bridge, has been a mentor and recently taught Ramirez how to stretch canvas.

“So I’m going to start doing bigger pieces and stretching my own canvas,” she said. “I’m very excited about that.”

Ramirez is finding that people want larger works, especially as commissions, such as a recent commission for a 50-by-60-inch painting she created in June – her largest work to date.

“People tell me what they want and the colors they like, and leave it up to me,” she said.

The Mona Lucy Gallery is open Thursdays, Fridays and Saturdays, but if Ramirez is there working in her studio, she’s happy to open the door to visitors.