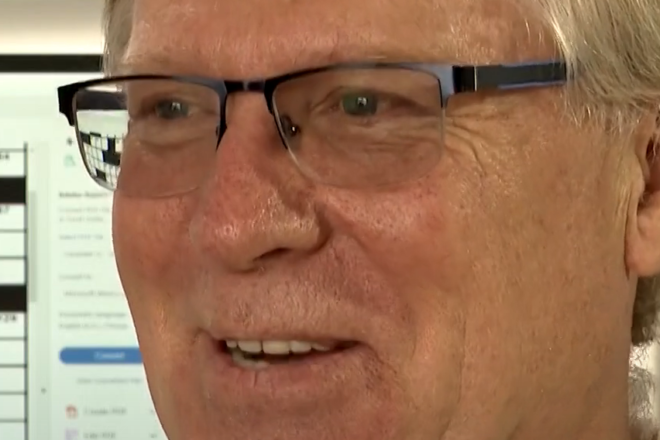 Myles Mellor has published more than 16,000 crossword puzzles, including the weekly puzzle in the “Peninsula Pulse.” Submitted.

Puzzle creator Myles Mellor didn’t set out to craft a new career when he first sketched a crossword puzzle by hand 20 years ago. He was simply trying to cheer up his dad back home in England.

“My mom died, and my father was quite devastated by it, and I was trying to think of a way I could make life better for him and cheer him up,” said Mellor, who was born and raised in Oxford, England.

His father loved doing puzzles, so Mellor started sending them to him. After receiving several, his father suggested he get them published. Mellor sent a few dozen unsuccessful queries before getting some assistance from David Hoyt, one of the world’s top puzzle creators.

Hoyt’s first piece of advice was to stop writing them by hand and start using puzzle-creation software.

“I didn’t even know that existed,” Mellor said.

Eventually he sold his first puzzle to 9-1-1 Magazine, an industry publication for the emergency communications and response industry. Now he’s published more than 16,000 crossword puzzles, including the weekly puzzle in the Peninsula Pulse, which is on the more difficult end of the spectrum of puzzles that he creates.

It can take anywhere from an hour to half a day for Mellor to finish writing a puzzle. The difficulty comes from both the size and the phrasing of the clues.

“It’s all about the level of difficulty you want to have,” he said. “You can make a puzzle easy by just using the definition of a word, or you can make it more difficult by using a cultural reference or something more subtle that might relate to the word. But I do try to include some easier ones so it’s solvable. I think about who the people are who are going to be trying to solve this.”

Mellor still loves the discovery and learning that come with crosswords, and he said there has been greater demand since the onset of COVID-19.

“It’s a peaceful challenge at a time when the world is anything but,” he said. “If you’re there with a crossword puzzle and a cup of coffee, it’s peaceful.”

Learn more about Myles Mellor on the Door County Pulse Podcast episode “How Myles Mellor Made Crosswords His Career.”