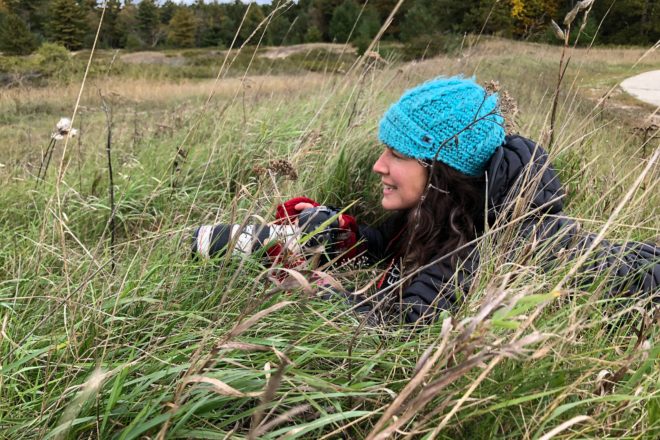 Wisconsin Center for Investigative Journalism digital and multimedia director Coburn Dukehart takes photos for a story about a proposed Kohler company-owned golf course at Kohler-Andrae State Park, in Sheboygan on Oct. 11, 2018. Here she photographs Mary Faydash, co-founder of Friends of the Black River Forest. Photos courtesy of the Wisconsin Center for Investigative Journalism.

Unlike most of the recent Hal Prize judges, 2020 photography judge Coburn Dukehart has a history in Door County – a family history. One of her great-grandfathers began coming to Door County in the 1900s, and Ephraim has ever since been her family’s spot – both as a place to vacation and to retire.

Dukehart’s path has taken her from her home in Washington, D.C. – where she worked for organizations such as National Geographic and NPR – to Madison to work as the digital and multimedia director at the Wisconsin Center for Investigative Journalism. The move from D.C. to Wisconsin was made in part so Dukehart and her family could be closer to her parents in Door County.

Read this Q&A to get to know Dukehart a little better and to know what she values in a photograph.

Tell me a little bit about yourself: where you’re from and what you do.

Initially I’m from Washington, D.C., but I’ve spent most of my summers in Door County. And now I work in Madison for a nonprofit, nonpartisan investigative journalism center, and we cover the state, mostly covering broken and failing systems. And then we give all of our content away for free to any news organization across the state that wants to use it. We’re also a training organization and train journalism students.

It depends on the day. Some days I am not in the office at all but I’m out either around Madison or sometimes traveling across the state to take photos for our stories. Sometimes I’m by myself or with one of the reporters to take photos of something that’s happening or to take portraits. On days that I’m not out shooting, I’m in the office usually editing the pictures that I took, helping to move some of the stories forward, some basic reporting, and then I plan all of the digital coverage for the stories.

We have multiple stories in production at one time so I’m always trying to look ahead and trying to figure out what needs to be done next, and then I’m also managing the website. I also do most of the layout on the website, and then because we’re a nonprofit we’re often doing grant writing and trying to raise money for our organization and I’m involved in that as well, but mostly I work with the editorial staff.

Your dad, Tad Dukehart, submits photos to the Pulse regularly, and we often run them with some of our Ephraim news stories. Did he have a hand in you becoming interested in photography?

He never pushed me in any particular direction, but he worked for the local news in D.C. when I was growing up, and he would take me to work with him once in a while, so I would ride around in his car and go on stories with him, and I always thought it was pretty cool that he didn’t work in an office but that his office was his car.

That made me think that I would enjoy a job that had that variety and that amount of freedom, but I don’t think I realized that until much later in life, after I [had] sort of gone through my undergrad experience, and then I went, “Oh, this could actually be a pretty fun job.”

What makes a good photograph?

For me, a lot of it is about a moment and emotion that a photo can elicit when you’re looking at it. There [are] really three elements that go into raising the bar of a photograph: It would have to have a meaningful moment, as well as composition and creative and excellent use of lighting, whether it’s natural lighting or artificial lighting.

What’s the best advice you’ve ever been given in your career?

Arrive early and stay late. That’s when the best moments happen – when the subjects have gotten completely tired of you being there, but you have to push beyond your discomfort and their discomfort because that’s when the real moments start happening. And also, always carry snacks!

How do you get people to be comfortable and trust you?

I keep my camera in my bag and just try to connect with them on a human level before I just show up and start shooting pictures. After a while I’ll get my camera out, and I’ll just have it sitting on the table or hung around my body, but not using it. They’ll go back to what they’re doing, and [I’ll] observe them for a while, and then I’ll start to take pictures.

I think it’s a matter of just [being] willing to wait out the awkward period until you get something real.

Do you have a favorite subject matter or type of story that you like to shoot?

I always like to shoot documentary situations where I’m getting an intimate glimpse into someone’s life, especially if it’s someone’s life that’s very different from my own. We’ve done over the years a number of stories about undocumented workers on dairy farms. That’s very interesting because it’s a very different life than I’m personally familiar with.

Do you have a photo that you’re most proud of?

We did this story last year [when] I really felt honored to get invited into this family’s home.

It was an undocumented father living with his wife and three children in Milwaukee, and he had been detained by Immigration and Customs Enforcement and put into a detention center for six months, and then with the help of his wife and a lawyer, he was able to get out of detention, and his family allowed us to spend the day with them.

That was a situation [where] I was really like a fly on the wall for a full eight-hour day with this family, and they picked up their kids from school and came home and watched a movie and went to soccer practice. There was a moment on the couch [when] he was snuggling with his wife and two-year-old son. For me it really felt that capturing that image, like a family snuggling together, really was something … I had been there for hours and hours, and I think they probably even forgot that I was there. That moment for me is an image that I’m most proud of.

What can photography do that can’t be accomplished with the written word?

With the written word you can be as descriptive as possible, but sometimes just having a photograph that shows what a person looks like or what an environment looks like can really help out the story. I think when reporters and photographers work well together, and they can match what the word and the photos are saying, that’s a third aspect of bringing the story to life that just the story or just the photo might not do.

When you’re in Door County, do you have any favorite places?

Just being out on the water, honestly, is my favorite place – in the canoe or kayak. It is probably my happiest place in the world.

For more information about the Hal Prize and to submit original works of poetry, fiction, nonfiction or photography, go to www.thehalprize.com.