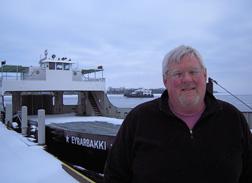 Author of “Bridges Are Still News,” Richard Purinton, poses in front of a Washington Island Ferry.

Richard Purinton’s second book, Bridges Are Still News came out this past December. The Washington Island resident and ferry boat captain/writer recently answered my questions about various aspects of his writing style(s) and his newest work – a varied collection of poems, essays, and photographs, touching on the lives, the history, and the landscape of Washington Island.

Sally Slattery: What inspired you to write Bridges Are Still News?

Richard Purinton: This book resulted from having recently completed one project, Words On Water, and I was looking for something that would provide both a challenge and a creative outlet.

My daily journal of 2007 that became Words On Water, was published by Norbert Blei’s Cross+Roads Press in June of 2009.

The book “Bridges” then came about because I had a number of completed pieces, although they were dissimilar, and I continued to write but on a less regular, regimented basis. I thought these might possibly comprise a single volume if they were connected by an overall theme. The opening piece happened to be titled Bridges Are Still News, and that became my working title, late summer of 2010. The metaphorical “bridges” then expanded on physical and historical bridges to connections with community and past.

These various poems, essays and photos were written knowing I wanted to continue writing – but not necessarily with publication in mind.

SS: How do you approach writing?

RP: Quite frequently a photo I’ve taken provides the impetus. I regularly take many photos, for advertising the ferry and the island in general, or to document an activity.

I don’t have a set time of day or schedule for writing. I often begin when I have a notion that I’m overdue in putting something down. Then, too, daily events, activities, or people I’ve encountered…these can also become the basis for an idea. Sometimes, an impression is so strong that writing about it seems the logical way to express the thoughts of the moment.

I’ve included personal opinion in this book, but I’ve tried to keep it light, realizing there are several viewpoints and that mine isn’t the last word. I push a few ideas in a roundabout way, creating satisfaction for at least raising the point. I prefer to let others sift and come to their own conclusions, whether they agree with me or not.

I found through the book Words On Water that others did identify with my thoughts, thoughts that often were based on this island location. This acceptance increased my confidence in what might be described as a writing voice. While the work that I do with the ferry company and the personal experiences are mine…the views and observations I’ve written about have been recognized by others as having similarities in their own lives, of having worth, regardless of where they live.

SS: Any books and/or writers inspire Bridges Are Still News?

RP: I can’t think of one influence or inspiration above others, but rather a general inspiration from reading: books, magazines, or admiring a logical, well-written editorial in the newspaper. 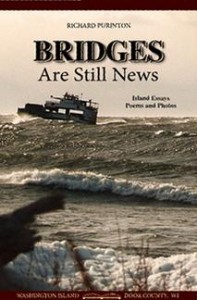 Without a single model to go by, I had wondered if combining poems with photos and essays could be made to work successfully. The jury is still out on that. But I personally enjoy books that are not only well-written, but go a step further, including illustrations or photos, and are of a personal nature.

Is this book a grab-bag of writing, or is there a thread that the reader can follow and understand without being put off? I don’t yet know the impact.

In recent years, I’ve read more poetry and more regional literature, thanks to Norbert Blei’s suggestions. I’ve always enjoyed journalistic pieces where the text is further supported by photos (or the other way around, as sometimes happens). What I didn’t want was an “Ideals” magazine layout, but instead something that would keep the reader off-balance through changing topics and forms of delivery.

SS: Any part of the book your favorite?

RP: I have no favorite part, except those in which I manage to create a phrase that seems close to music – ear music. Sometimes these phrases or word groupings pop up within a sentence of prose, other times in poetry. When a phrase comes forward that encapsulates what I’m trying to say as well as what I’m feeling about the subject, then there is pleasure from the creative process. I can only hope those ideas, feelings, are communicated to the reader.

I enjoy all of the ways of communicating with writing, but what often drives my poem or essay is the photo, and more than anything, that begins the writing process for me.

Do my photos cloud the reader’s experience and detract from the words? Or might they cause the reader to think more about the topic than if words alone were on the pages? I’m not sure. I’ve rarely taken a photo later, trying to match with something I’ve already written.

SS: How was this book different than writing your first? How was it similar?

RP: Neither one was written with the idea or a certainty that there would be a published book. I wrote the daily journal at the suggestion of Norbert Blei as a means of improving my writing skills and in accepting a personal challenge to be more serious about writing. The journal was one continuous, single writing project that stopped when the year ended. I was fortunate when Norbert chose to publish it for me. The impact of Words On Water became significant, as it turned out, in that it described a way of life many readers could relate to. That became the overwhelming bonus, realizing the power written words might hold.

My current book, Bridges, was written in small bites, for personal pleasure and occasionally a business slant, but always with the thought in mind that I might want to communicate clearly with others.

The closing piece in the book, a free verse poem, was written as my father-in-law lay dying. He was nearing the age of 99 and had many great years and accomplishments behind him. His last days caused me to reflect on his life, and how he impacted our lives to the last, even when slowly slipping away. I was invited to read my poem as a eulogy at his funeral. The fact that others also related to this tribute was clearly a much stronger communication than I could possibly have made through prose.

The biggest difference for me, comparing the two books, is that I became the publisher for Bridges. The alternative to self publishing? I didn’t see one for this book, because I doubt if there would have been anyone else that would want to create or finance such a project.

As my own publisher, I knew and understood my requirements and could achieve acceptable results more quickly. Project control, I suppose, is what I’m describing here, but it was necessary in order to get the details the way I wanted them. I must say, Amy Jorgenson (of Washington Island) did a great job with the graphics, and she is very intuitive with her suggestions.

In retrospect, I think writing may have been the easier part of Bridges, and the most personally rewarding, but the sum total of the elements that bring a book successfully to a store shelf are also satisfying.

SS: Would you say there is a difference between the culture and people of Washington Island and the Door Peninsula?

RP: Well, you probably wouldn’t see any difference just looking at Islanders! [That reminds me of the visitor who asked if there were any Icelanders around, and what did they look like?]

Our island differences – culture and daily routine – may be deeper-seated than most of us realize, because our thoughts seem to concentrate on what goes on within this island community, with island families and friends. Our island world is approximately six-by-six miles, and we naturally react daily to the dynamics of island life more so than to what goes on in the Door Peninsula or the rest of Wisconsin.

There is satisfaction in being an island apart, the notion of independence, of not being in the middle of a vortex of continual breaking news, of having plenty of time to reflect and figure out what is important in life. Those are traits of island life that we cherish.