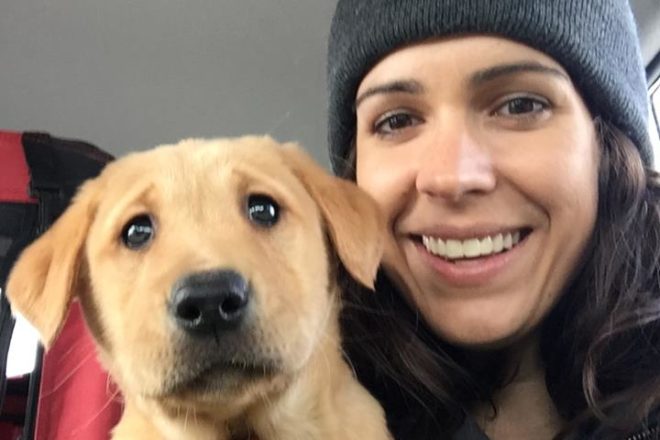 The Pulse caught up with Rachel Stollenwerk, the woman in charge of the campaign to rebuild Eagle Tower. This 27-year-old Fish Creek business owner and board member with the Friends of Peninsula State Park brings project management experience to one of the biggest projects ever brought to the crown jewel of Wisconsin’s state parks. Responses have been edited and condensed for clarity and space.

What brought you to Door County?

My husband and I took over Edge of Park Bicycle and Moped Rental in Fish Creek in February of 2015. I had been coming to Door County summer vacations since I was two and worked my college summers at Edge of Park.

How did you get involved with the Friends of Peninsula State Park?

One of the board members asked if I was interested in becoming a board member in August after we had moved up here. I love Peninsula State Park. The success of the park is the success of my business so I felt whatever I could do to help make the park an attractive place for people and a valuable resource for the county was important for me.

What projects other than Eagle Tower have you been involved in with the Friends?

I send out press releases and help with the communication to media outlets. I volunteer to groom the ski trails in the winter and I’m also helping with the nature center campaign. We have a significant amount of money towards the new nature center established through the Knowles-Nelson Stewardship grants. Now we’re planning an additional campaign to complete the amount needed for that.

What is the Eagle Tower Fund Committee?

It’s essentially a subcommittee of the Friends that is led by myself, the board member, and has some additional board members on it. But it also includes representatives from the Door County Visitor Bureau, Ephraim Business Council and then some additional residents. The committee was formed around May of 2016. When it was identified that the tower was a substantial amount more than the Friends had risen in the past, the board members decided it would be good to bring additional members to help plan and organize the campaign approach.

How were you chosen as Campaign Director?

What is the biggest challenge you face as Campaign Director?

My time and the rest of the committee’s available time during the busiest part of the year has been the most challenging. The campaign up until now has required a lot of communication and awareness and information to be made available as the tower was planned for deconstruction. That effort and coordinating merchandise that needs to be done when people are still in the county is challenging. Now that the quiet season is approaching and the committee members, with their own business or their own jobs, are starting to shift, I think that will become less of a challenge.

The most important thing for me is making sure we do a good job focusing on interpretive and educational signage, not only at the tower but also throughout the park. We need to make sure that we not only build a tower that is representative of what so many people remember, we also need to make sure this tower is attractive and inviting to people who have never experienced or who are experiencing this climb or location for the first time. Education and interpretive signage can make people appreciate what we have here and hopefully that recognition turns into true appreciation for our park and a willingness to support the continued initiatives that the Friends and the Department of Natural Resources want to see happen.

What is your pitch to those considering a donation to the Eagle Tower Fund?

The tower is an iconic symbol that the entire state of Wisconsin is familiar with and it has created so many memories and experiences for people. That type of donation is priceless. The value that people see is different. It’s an emotional donation from one perspective. On the other side, you have an opportunity to see how your Friends groups operate in Wisconsin and what they’re capable of doing. By being successful in this initiative, we can show the state and all the people that live here that there are strong groups behind these state assets and natural resources. We can go on and on and talk about what the state should or shouldn’t do. That’s not why the Friends groups are here. The Friends groups are here to fill the gaps. We want to move forward. By making a donation, you are agreeing that you are ready to go forward too.

For questions or comments on donations to rebuild the tower, visit eagletowerfund.com or contact Campaign Director Rachel Stollenwerk at [email protected].