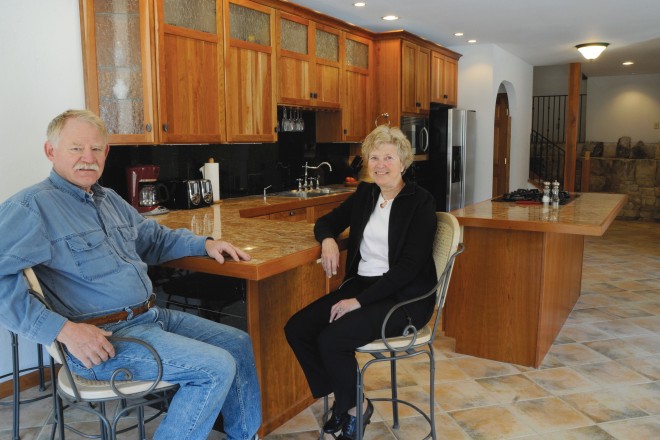 In Door County Living’s fall 2007 issue, I wrote an article about what most people have nicknamed “The Quarry House.” Located on Spring Road in Fish Creek, the house stands in the center of a large, former rock quarry. Owners Mitch and Mary Heinrichs painstakingly created their dream retirement home by drawing up their own plans and doing much of the work themselves both outside and in. In September of 2007, much of the outside stonework had yet to be completed. The driveway was mapped out but mostly dirt and there was little-to-no landscaping. Today, there is a beautiful driveway of grass pavers and several landscaped areas with trees and plans for a pond and waterfall.

Inside most of the work has been completed. The tile work, which is in several of the rooms and bathrooms, is exceptional thanks to Mitch and his son who worked in the tile industry for many years. There are natural stone floors and hallways and some carpeted areas to help with sound absorption. The kitchen is open and inviting with rich, dark cabinetry and a large island. When I asked Mitch what he has considered the greatest obstacle on this home, he immediately replied:  “Age!” This labor-intensive endeavor has taken its toll on Mitch physically, but he seems to take it all in stride.

Part of the attraction of the quarry house is its interesting type of construction. Insulated Concrete Form (ICF) buildings are essentially made of Styrofoam rebar and concrete and are very energy efficient. With approximately 4,200 square feet to heat and cool, efficiency was a must for the Heinrichs. I asked Mitch how he fared during our extreme (and extremely long) winter of 2007–2008. “I think I spent about $1,700 overall,” he said. With the house sitting low in a wide-open, rock bed, the heat of summer can feel unbearable outside. On a day when temperatures were nearing 85 to 90 degrees, however, the house inside was a balmy 71 degrees thanks to the natural coolness of the stone floors and walls.

The outside of the quarry house is beautiful. It has a genuine, organic aesthetic that fits in with its natural surroundings. Much of the outer walls are faced with stones from the quarry and while one wouldn’t think that you would run out of stone in a quarry, Mitch claims they had just enough stones to finish the exterior of the home.

Mitch has been working tirelessly on the house while Mary has been trying to sell their home back in Menominee Falls. Since Mitch has spent a fair amount of time alone up here, the couple decided to rent out both the main house, which can sleep up to 12 people, and the “carriage house,” which sits above the garage and sleeps two. Interested parties can contact either the Fish Creek Civic Association or the Door County Visitor Bureau for more information.

Mitch and Mary have plenty of projects to keep them busy around their house and they are wisely saving inside projects for the cold winter months ahead. Their house is unique and uniquely theirs, a showpiece that, even before the final touches, has become a Door County celebrity.