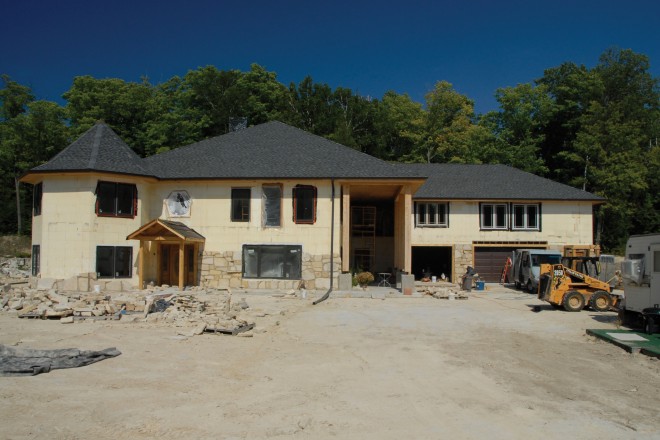 If you live in the northern Door area, I’m sure you’ve seen it. If you live anywhere in Door County, I know you’ve heard about it. I am, of course, talking about the “Quarry House” on Spring Road in Fish Creek – a large, French-style manor house set right into a stone quarry that has been unused for close to 15 years. This is the type of house that sets tongues wagging in every coffee shop from Kick to Drink. Since building began, curiosity about the project has made Spring Road a much-used detour from the highway.

Mitch Heinrichs and Mary, his wife of 41 years, came to Door County from Menomonee Falls, Wisconsin, to visit Mary’s cousin who happens to live on Spring Road in Fish Creek. Although the couple had not traveled in Door County extensively, they loved the area. As they made their way down the road, Mitch noticed a for sale sign in front of the abandoned quarry. He looked at his wife and by the time they returned home from their visit, the wheels were in motion. “It was one of the few times in our marriage both of us instantly knew it was right,” Mitch jokes.

With the property securely theirs, Mitch and Mary now had the difficult task of drawing up plans and finding out just how they could incorporate all they wanted out of a retirement home into their unique setting. A self-described amateur architect, Mitch set to work on the house plans. Taking inspiration from a trip to the French countryside, he tried to incorporate the things they most enjoyed architecturally into their new home. Wrought iron railings, banisters and a large, domed turret suggest European influences.

As one can imagine, building anything in a stone quarry would have its challenges, let alone a year-round, family home that is actually level! The rock bed is naturally uneven and with no hope of going down to put in a foundation, it was a tricky process.

After much research, Mitch settled on an up-and-coming area of construction called ICF, Insulating Concrete Forms. This is an exciting arena of building that offers many advantages for the homeowner. ICF building consists of large, hollow Styrofoam blocks stacked together to create the perimeter of the home. The blocks are then filled with steel reinforcement bars (rebar) and concrete to create a solid, vapor-free, energy-efficient home. Some of the benefits include the fact that there are no drafts or cold spots in an ICF home. Nothing blows through concrete, and the Styrofoam acts as built-in insulation. Since temperatures throughout the home stay constant, the energy savings are significant. Mitch says the cost of construction is about 20 to 30 percent higher than a traditional, stick-built home, but that cost can more than be recovered in energy savings over the next few years. With ICF homes, the second floor is actually hung within the ICF blocks, ensuring that no outside air blows in. Mitch actually had to put in a separate ventilation system to ensure that stale air and carbon monoxide could be forced out. Considering that building with ICF can save more than eight trees per home and reduce energy costs by up to 40 percent, ICF could become a viable environmental building alternative.

With all systems go, the Heinrichs were ready to get started on their retirement project. The first order of business was to get the site ready for construction, which meant moving several piles of rock and dirt to different locations. The site itself is on four acres of land, most of which, obviously, is rock. Toward the rear of the property, perched on top of the quarry’s back wall, is a beautiful wooded area. After clearing the area and settling on the exact spot, Mitch literally built the house into that back wall. Large portions of the quarry wall run the back length of the house making a stunning, natural feature within the home. One challenge that arose was cutting the ICF blocks to fit exactly onto the uneven rock floor. This process took a few days but once it was finished and level, the rest went up without problems.

Mitch estimates that when all is said and done, the total amount of concrete used for this project will be somewhere upwards of 250 tons. Even with our occasional Door County windstorm, the Heinrichs can be assured that they will feel none of its effects!

One would assume that with such a large undertaking, the contractors and subs would be swarming the quarry day and night. Such is not the case with this project. Mitch has been a professional tile setter in the industry and in his own business for more than 25 years, so he assumed the general contracting duties. “I did the plans, now I needed to know how to build it.” To find his labor, Mitch has relied on the community at large. “Everyone has been so nice,” Mitch says with a huge smile. “People are interested in such an unusual project and have been so helpful with ideas for tradesmen and solutions to whatever problems may come up.”

One such problem was the large, round window on the second floor of the house. Mitch loved the look of the window but had trouble figuring out how to shore up the frame to prevent leaking while pouring large amounts of concrete to fill the ICF block around it. On the advice of a neighbor, Mitch went down the road to see Cy Turnbladh from Hands On Art Studio. Cy has experience in metal sculpture and between the two men, they created a device that did the trick. By word of mouth Mitch has found many artisans while in local gas stations, coffee shops, and restaurants – and he’s proud of what a community effort this has been. “I think everyone in the town of Fish Creek has been through the house,” Mitch says. With every conversation comes a new idea or the name of someone that can help on the job.

The interior of the home is large and spacious. Taking advantage of their location, a large portion of the interior flooring is the natural, flagstone quarry bed. Combined with the back rock wall, it gives an inviting, organic feel to the space. Throughout the house, there are wrought iron railings from local welder Joe Biwer keeping the area open and available for the nearly 360 degree views.

Mitch credits Wulf Brothers with crafting a very intricate, zoned, in-floor heating system throughout the entire first floor. This will essentially heat the home along with a baseboard heating system on the second floor. One look into the utility room and you are reminded of NASA’s control room. Mitch assures me that he is well acquainted with how things are set up, as he has been involved in every aspect of the project. “Whatever I don’t know I ask them to teach me. I work hard and learn fast.”

With four children and 11 grandchildren, the Heinrichs are looking forward to moving into the new space. Most of their family and friends have been up to help on the project at one time or another, and it has really turned into a lasting legacy for Mitch and Mary. At this point it is still a work in progress and something that the couple have truly immersed themselves in. It is obvious from talking to them how much fun they are having. Building their retirement dream home is definitely about the journey, not the destination. Mitch enjoys the fact that since he did the plans himself, changes along the way are easy and stress free. “After all,” as Mary succinctly puts it, “nothing is set in stone.”