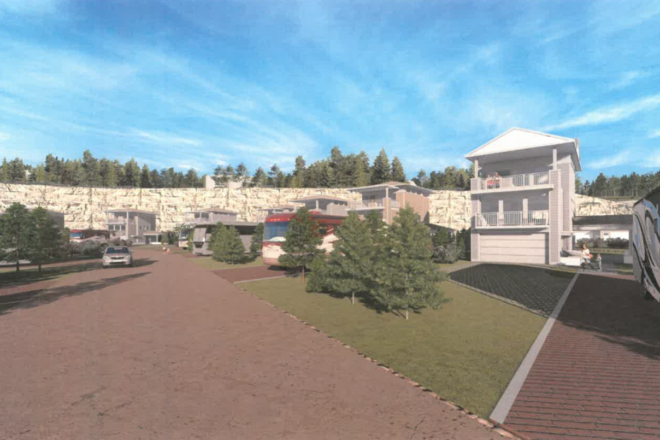 A rendering of the proposed Quarry Bluff RV park.

Sevastopol residents and plan commissioners finally got a look at the Quarry RV Park proposal Tuesday, and they had a lot of questions for developers Tom Goelz and Mike Parent.

After six hours of presentations, questioning and testimony from residents, the Sevastopol Plan Commission unanimously recommended to the town board that the Conditional Use Permit (CUP) application for the development be denied due to incomplete elements in the application. The vote is the first step in a decision that ultimately lies with the Door County Resource Planning Committee because the town is governed by county zoning.

The Sevastopol Plan Commission’s vote is not binding and does not mean the project can’t move forward. The Town of Sevastopol is governed by the county’s comprehensive zoning plan. That means the plan commission and the town can only make a recommendation to the county’s Resource Planning Commission. The project now moves to the town board for review before going to the Resource Planning Commission.

The developers presented their plan to a room packed to its capacity of 120 people, with more watching the meeting streamed at the Institute Saloon.

The 117-site RV park and housing development would be located at the former Leathem Smith quarry across from George Pinney County Park on Bay Shore Drive. Each site would be 9,000 square feet, on which owners would have the option to build homes with a first-floor footprint of up to 1,200 square feet.

Pete Hurth of Baudhuin Engineering led the presentation, pointing out that he lives just two-thirds of a mile up the road from the site. He said the development would allow only Class A motor coaches, which can cost between $200,000 and $1 million and look similar to a tour bus.

The plan includes ponds for stormwater management and aesthetics, a clubhouse, swimming pool and tennis and pickleball courts. Hurth compared the project to the Hearthside development in Petoskey, Michigan, but he said few resorts of its kind exist in the Upper Midwest.

“This would be the only development of its kind in Door County, but also in the state of Wisconsin,” Hurth said.

He touted the demographics of the Class A motor-coach clientele, pointing to studies that show that 87 percent of Class A coach owners are older than 45, 38 percent are older than 65, and 50 percent of such owners have annual incomes of more than $100,000.

“This appears to be a similar demographic to those opposing the project,” Hurth said.

The property is zoned Recreation and has been since 1976. Hurth said a proposal such as this for the property should not be a surprise to anybody.

“We’re not asking for rezoning,” he said. “We’re meeting the letter of the law as county zoning.”

But members of No Quarry RV Village, a well-organized opposition group made up of nearby residents and other concerned citizens, questioned many aspects of the plan. The wastewater and stormwater management plan dominated much of the discussion by opponents and plan commissioners.

The developers plan to add one to two feet of fill to put on top of the existing rock, and add curbs and gutters to control runoff and guide it to the stormwater-retention pond. The water would then flow down to another pond below the bluff on Bay Shore Drive.

Other speakers argued that the application should be denied due to the lack of an approved stormwater management plan. The DNR upgraded requirements in the plan, including a geological study, because of challenges from the No Quarry RV Village group, he said.

Commissioner Jim Nellen told the developers they had put the commission in a bind by not giving them enough information to make a recommendation.

He said he could not recommend approving the application based on assurances that the updated stormwater plan is on its way.

“You’ve been working on this for 18 months,” he said. “You’ve had plenty of time to provide all the information needed for the plan commission to effectively assess the impact of the application.”

Hurst argued that at more than 500 pages, the plan is complete and received feedback from the county’s Land Use Services Department that it is one of the most complete plans it has ever received.

Wastewater would be managed with a 40,000-gallon precast holding tank with its own access drive at the lower portion of the quarry property. That tank would be located 470 feet from the nearest residence with a heavy landscaping buffer.

Hurth said Door County sanitarian John Teichler recommended the tank. With the volume possible at full project buildout, the tank could require pumping multiple times per day at peak use.

Plan commission members were skeptical of the developer’s traffic estimates, the economic feasibility of the project and the handling of wastewater and stormwater.

Neighbors are also concerned about traffic impacts on Bay Shore Drive, which has many curves as it winds along the shore and narrow shoulders. During the summer, the road is frequently obstructed by landscaping and contractors’ vehicles parked on the road.

The project would be accessed off Bay Shore Drive, with a turnoff lane for northbound traffic. Hurth produced a study estimating that the development would add 330 cars to the traffic count on Bay Shore Drive each day at full buildout. Motor coaches, which weigh an average of 33,000 pounds (the road’s limit is 80,000 pounds) are expected to be a very small part of that traffic.

“Motor coaches will not be coming in and out daily,” Hurth said. “Many show up in spring and leave in fall.”

Nellen spent considerable time questioning the numbers used in the traffic study, and other opponents argued the proposal would diminish the enjoyment of the area for walking and cycling.

Event director Sean Ryan, whose Door County Triathlon and Fall 50 events both use Bay Shore Drive, said the county’s character is crucial to why people travel to experience silent sports on the peninsula.

“The addition of 117 parcels will substantially increase the number of residents and vehicles,” he said. “I’m concerned this development would negatively impact enjoyment of silent-sports activities on Bay Shore Drive.”

Developers noted that there are many other homes in the area that affect character in other ways, pointing to the density of the seasonal single-family vacation homes within a couple of miles of the project. Each of those has its own driveway and its own septic system, Goelz said.

“Our project has two driveways, one septic and two wells,” he said.

The blasting necessary to bury utilities, grind rock and create a 20-foot-deep retention pond on the site has many neighbors concerned about the health impacts from dust, noise and the disturbance of the karst topography beneath their homes.

Jim Schults, president of the Bay Shore Property Owners Association, suggested a long list of studies the developers should be asked to produce, including an assessment of the impact that blasting will have on the quarry wall surrounding the property and a geological survey of the entire site area.