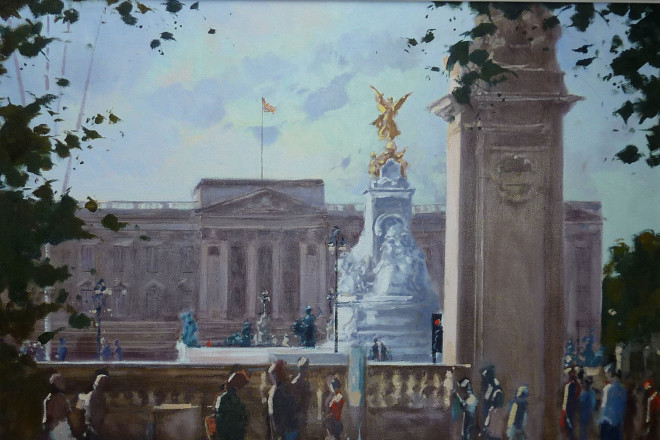 “London in September” by Chris Daynes.

I first learned about Chris Daynes when I purchased a DVD from The Artists’ Place in McKinney, Texas. The Artists’ Place is the United States distributor for Town House Films. Their DVDs feature international artists, many from Britain, painting in various European locations.

Mr. Daynes has won many awards for his paintings and I think he understands how to reduce a scene to its essentials as well as any artist. His painterly style is pleasing and his colors are wonderful. His answers to my questions were given in a thought-provoking manner and I think you will enjoy this two-part interview. His website is chrisdaynes.co.uk.

Randy Rasmussen (RR): Mr. Daynes, I want to thank you for doing this interview. Have you ever heard of Door County, Wisconsin? We are sometimes called the Cape Cod of the Midwest. 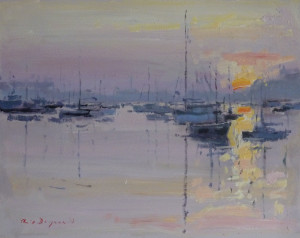 Chris Daynes (CD): Well, I had heard of Cape Cod, but not Door County. I spent some time in Cambridge, Massachusetts back in the ‘70s when I was working for a silk screen printer and sign maker – a lovely, generous man with a Boston accent you could cut with a knife, and heard the Cape was a nice place but I never went there or New York believe it or not, but Door County, Wisconsin looks wonderful, according to my internet search. Isn’t that a romantic sounding name, Wisconsin? It looks like a great place to paint, as are Maryland and Maine where I have spent some time with several American painters. They are such a friendly bunch.

RR: When did you realize your interest and ability in art might lead to a career?

CD: I had an aversion to academic work from the moment I was challenged by it, apart from language, which interests me to no end. I eventually learnt that needs must, so I suffered it to a necessary level, but I still didn’t like it apart from writing English. In contrast, I was happy when making and doing, but my real epiphany came during my time at Norwich School in Norfolk, where I was privileged to go thanks to my Great Uncle Norman who paid my school fees after the Headmaster informed me in his study that my father had left us. A year later, I faced the same man in the same place who had worse news for me. I’m sure that my life would have been very different without my uncle’s generosity. The chance to thank him properly as I should have done is of course long gone now, and I’m sad about that. He was a double first at Oxford, a Judge and Queen’s Councillor and a few others things besides. I’m afraid I didn’t live up to academic expectations and I must have disappointed him when I announced my intention to be an artist, but I am eternally grateful for his support when I would probably have sunk without trace without it. Meanwhile, aged 14 or so, back in the art room and looking at the painting I was working on, my art master announced quietly and some gravity that I had “broken through.” I had discovered the “expressive mark” and everything changed after that for the better, and all my painting thereafter would contain the newly discovered gestural mark making. He knew and I knew that I had discovered something important by myself that would have a major impact on my life. I had found my own path in life, and I now had fire in my belly. 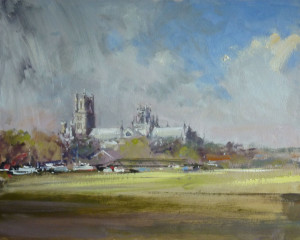 RR: As a child, do remember learning to draw? In the United States grade school offers limited art classes but as the student moves on there are more and more opportunities. Is this different than the English educational system?

CD: No, I think the American art education system is similar to ours, but of course will vary between institutions. My first inquiries about drawing were dealt with by my mother. She drew a cat using the letter M for his ears, and a Q for his body. Perfect! Later years were all about patterns and colouring in probably, but it wasn’t until my enlightened teacher sent us off to the local art school to draw from the life model that I really got to grips with it seriously, and it remains a cornerstone of my experience, and the experience of the students I taught later I might add. Alex Humphris, still with us at 85, was a great one for quotes from the “greats” as he called them. “If you can’t draw a man falling from the top window before he hits the ground, you can’t call yourself an artist!” he boomed out, arms aloft. The quote is from Géricault and I think he makes a good point, albeit via a slightly gruesome image. Alex had a quote for most situations, some of them invented by him I’m sure, but always apt. I made a mental note of most of them and my own pupils, when their turn came, knew them all. One of the best was from Ingres, “Painting is nine tenths drawing.” How true that is. Drawing to me is a means to an end, not necessarily an end in itself – a research tool to train the mind. Another lesson I learned was to carry an A6 Moleskine type sketchbook around with me, with an elastic band (discarded by the postman on the pavement) around it to hold a pencil securely along the open side. And to use it.

RR: I read about and looked at the website of Leeds College of Art. The school offers multiple degrees. What was your degree and emphasis?

CD: In those days, in the mid-1960s, one had to complete a preliminary year of general art study in order to inform your choice of specialism thereafter because the high school curriculum was inevitably narrow. I applied for a one-year pre-degree course at Canterbury College of Art on Alex Humphris’ recommendation and got in, thank goodness. I was dangerously euphoric for weeks after I received my letter of acceptance. Much later I told my tutor at Canterbury that I wanted to go into Graphic Design for my degree the following year as there was a better chance of a job at the end of it. He soon put a stop to that nonsense, “Good grief boy, go and paint somewhere!” I was suitably impressed by his alarmingly honest opinion of where my possible talent lay, so my first choice was for Fine Art Painting at Leeds College of Art in Yorkshire, up in the north of England where Henry Moore had studied, and had a reputation for innovation. I interviewed and got in. I haven’t forgotten the train journey there from my home in the south of England to the wild and woolly north, full of coal mines, slag heaps, the smoke from the Sheffield Rolling Mills and all the detritus of a fading industrial past, not to mention living in a “back to back” with Monday’s washing strung out from one side of the street to the other, no refrigerator, and people who spoke in a funny accent. The only hot tub available was at the public baths. Yes, it was just like that, but it was cheap living. That’s what made it new and exciting; it was all so different.

RR: You had a career as an educator. I think your background in education gives you a chance to answer my following question based on experience. Do you think a great artist is born with the ability or can one develop the ability with hard work? 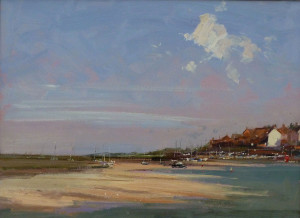 CD: That’s a hard one and I think there’s more than one answer to the question. To take the second part of your question first: can any innate ability you have be developed? Yes, of course. Any facility in any area of human endeavour can be enhanced by intellectual and physical practise, and I’m spelling that word with an ‘s’ and a ‘c.’ I’ve just watched the Leeds Piano Festival on television. The physical and mental skills that it takes to perform pieces 20 minutes long from memory is quite awesome and that didn’t come by just having a talent in music. That was the result of incredibly hard work, dedication to their subject, and a determination to make the best of what they have, regardless of any competition. Actually, I don’t think we should spend our lives competing with others, alive or dead, but just try to make the most of what we have. There will always be others better than us. That’s the point. So when we go out and paint, it’s out of respect for any talent we have been given, in whatever quantity, and it’s right to try to develop it if one has the opportunity. I tell beginners, anxious to get a good result the first time out, that they should care more about the mental processes going on in their head than the result on the canvas, but of course that’s not really what they want to hear, but sometimes the truth hurts. Finding one’s own “voice” in painting will happen, if it does, by responding to the landscape in our own way and not by worrying about what the other person is doing. “Enjoyment” is an odd word in painting. “It wasn’t very good but I enjoyed it” should mean, “I saw the problem and did my best to solve it in my own way according to what I know.” There’s an integrity there which the best plein air painters demonstrate, which comes from acute observation every time, but still allowing for the essential process of emphasizing what is important and editing out the superfluous. But a passion for painting is not enough. It has to be underpinned with knowledge and experience, which will only come by doing it. You ask if artists inherit their ability? I imagine that they do, to a degree at least. There is enough evidence to suggest it.