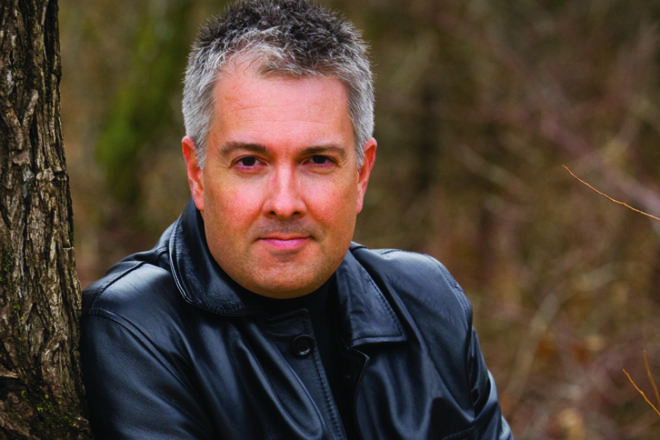 Next weekend, Washington Island will play host to its 4th annual literary festival, centered on the theme, “The Mystique & Mystery of the Midwest.” Among its lineup of impressive authors is one whose writing career has been defined by mystique and mystery: Brian Freeman.

Freeman is the award-winning thriller/mystery writer behind the popular Jonathan Stride series, which follows a Duluth-based homicide detective through twisting plots with unforgettable characters. The debut novel in the series, Immoral (2005), won the Macavity Award for Best First Novel and was nominated for several other awards, including an Edgar Allan Poe Award and a Gold Dagger award. He has since added eight more books to the series and also published three standalone novels (Spilled Blood, The Agency, as Ally O’Brien, and West 57, as B.N. Freeman).

In 2011 he published The Bone House, set in Door County and focused on a couple trapped in a web of suspicion who rely on quirky detective Cab Bolton for help. This marked the start of a new series focused on Bolton and was followed up with 2014’s Season of Fear. 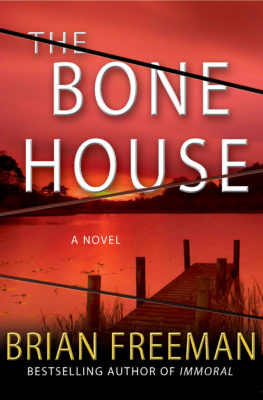 “The Bone House” introduced thriller/mystery writer Brian Freeman to the Door County community, as that is exactly where it took place.

Prior to Freeman’s visit to the festival, he will make a Sept. 14 appearance at Crossroads at Big Creek during “An Evening with Author Brian Freeman,” a free program sponsored by the Friends of Door County Library and Write On, Door County. The program begins at 7 pm.

I caught up with Freeman to talk about his career in writing, inspiration for the hidden, intimate motives of his characters, and his upcoming return to Door County. For more on the author, visit BFreemanBooks.com.

Alyssa Skiba (AS): When did you know you wanted to be an author?

Brian Freeman (BF): I can remember sitting in sixth grade class back in California working on a mystery novel, so my writing life goes back a long, long way. I had a wonderful eighth grade composition teacher that really recognized my love of writing and really encouraged me. From that time in my life forward, that was what I wanted to do with my life. I wanted to write books.

AS: Was there a particular book or author that sparked your interest in psychological thrillers?

BF: I’ve obviously read a lot of mysteries and thrillers over the years although when I was growing up, I actually spent more time reading some of the big, dramatic authors, folks like James Michener, Leon Uris and Irving Wallace, and I really enjoyed the way they dealt with families and individual characters and drama. I think that’s one of the reasons I don’t write typical shoot ‘em up, superhero, supervillian sorts of thrillers. I like to have thrillers that focus more on the characters, sort of more intimate drama as opposed to big, urban, espionage crime drama and I think that’s because I loved those dramatic authors growing up so I was looking to write thrillers that had a real personal touch to them.

AS: What does one need to go deeper into a character’s head? Do you think that’s innate or can it be learned?

BF: I think if you’ve got the storytelling gift then you sort of understand how to get inside the heads of characters and you sort of understand what drives people. That’s ultimately what it’s all about, so the writing side, I will always do background sketches on my characters before I ever start writing a novel but the reality is, once you actually start putting words on paper, the characters kind of take on a life of their own. It doesn’t matter how much time you actually spent getting to know that character before you started, inevitably they surprise you when you’re putting words on the page and you have to learn to listen to them and get to know them as you’re writing the book.

AS: What’s your source for creating those background sketches?

BF: It’s a combination of things. Obviously I’m drawing out of my own imagination for all of these characters. There’s obviously a little bit of me inside every character which probably should scare anyone who’s read my books and then I like observing people. I’m always taking notes about people I find interesting, whether it’s an interesting personality trait or how they talk or how they look. All sorts of little details like that are things that might end up in a book sooner or later.

AS: In 2011, you published The Bone House. What inspired you to get away from Duluth and set it in Door County?

BF: I had written five Jonathan Stride books at that point and I had put that poor man through such hell that I thought he deserved a vacation. I set out to write a standalone novel and when you read The Bone House, I think it’s clear why I chose to make it a standalone thriller, not a Stride book based on how the plot evolves … I needed a place to set the novel and Door County has always been one of my very favorite places anywhere, my wife Marcia and I have visited Door County many, many times. I wanted a small-town atmosphere for The Bone House but I also wanted an environment in which Hilary and Mark Bradley were kind of outsiders coming into an area that they didn’t necessarily know that well, so I wanted a little bit of that tension between the longstanding residents of the area and these folks that are coming from the big city. That’s a tension you find in a lot of remote tourist areas and I think you find that in Door County as well.

AS: You also teamed up with Ali Gunn to become Ally O’Brien for the book The Agency (2009). What challenges did you face in stepping away from your regular genre to write this chick-lit?

BF: That was such a fun project. Ali was my agent at the time in London and she had this idea, sort of a satirical book set inside the publishing industry but she was not a writer so she asked me if I would consider writing the book. I thought that sounded like a fun challenge so I came up with the idea for it and wrote the book. I was getting inside the head of a woman narrator and doing the whole thing in first-person, which I hadn’t done before, and taking a very different approach, taking a much more fun, humorous approach as opposed to the dark, intense things that I do in my thrillers. It was something very different and as a writer, I always appreciate tackling new challenges and things I haven’t done before. We got a lot of great feedback on The Agency and the sad part of it was, as we were talking about where to go in another book along those lines, my agent Ali actually passed away very tragically and unexpectedly. I had to kind of think about, do I really want to go on and do another book in that vein? Because so much of The Agency was caught up in my relationship with Ali. I had a great idea for another book and I felt that there were some great characters and stories that needed to be told so I wrote a follow-up novel called West 57 and it was very much in the style of The Agency but that was all me. I really love West 57 as much as The Agency, maybe even a little more because there’s a basic sweetness to West 57 that I think it’s a very easy book for people to fall in love with. 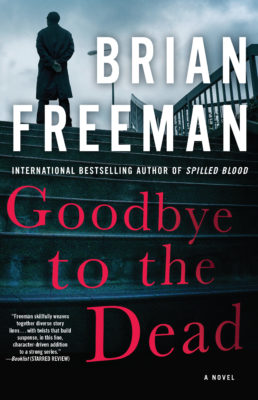 Author Brian Freeman’s newest book, “Goodbye to the Dead” was released in the spring of 2016.

AS: You’ll be here for the Washington Island Literary Festival in September. Is there anything in particular about the festival that drew your attention?

BF: The biggest reason of all really is it’s a part of Door County and Door County is a part of me and a part of my books. To this day, The Bone House is a favorite among my readers and a good chunk of the action in The Bone House takes place on Washington Island so the opportunity to go back there and to not only talk to readers but to have a chance to revisit some of the places that I used in the book is something I’m really looking forward to. Because I used real life locales in my book, it gives me a little bit of a haunted quality when I go back to these places because I can sort of hear the characters’ voices in my head and I can kind of feel the echoes of those things taking place in the area where the book was set.

AS: What’s next for you and Jonathan Stride?

AS: What advice would you give to a budding thriller/mystery writer?

BF: There are two things. One is the more you read in the genre, the more you get a sense of how writers do what they do. There are some people that take a lot of writing classes and use that as their foundation. If that works for them, that’s great. That was never the way I learned. I learned by watching how other writers performed their craft for the readers. You have to read at a very detailed level to kind of see how writers are using words to work their magic. The other piece of advice, which may be even more important, is that aspiring writers always have to remember that 100 percent of unwritten books have never been published. Sooner or later, you’re going to have to superglue your backside to a chair and get busy because these books don’t write themselves.