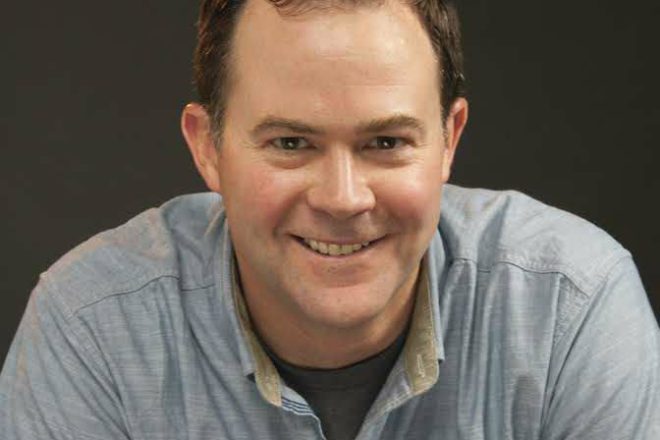 The line, “The houses we grow up in have ways of not only containing our childhoods but defining them: They’re the stages of our earliest, most primal memories, and from them we each derive our idiosyncratic conceptions of home” struck me the first time I read it. It’s from David McGlynn’s One Day You’ll Thank Me: Lessons from an Unexpected Fatherhood, and in a few words it reflected back to me all the responsibility I feel as a parent – the weight and greatness of it.

Lines and lessons like this are scattered throughout McGlynn’s most recent work as he tells stories that illustrate how parenting missteps ultimately help lead to parenting adaptations.

McGlynn – the 2020 nonfiction Hal Prize judge and Lawrence University English professor – found his way to writing nonfiction as a graduate student when he learned that writing about his life gave him a unique access to emotions, dialogue and memory. Here, McGlynn shares some of his thoughts on writing. To read the full Q&A, go to doorcountypulse.com.

Do you have apprehension when you’re sitting down to write about your family?

Yeah, on the one hand you always do, because you recognize pretty quickly that you’re not just writing about yourself – you’re always writing about people that you’re close to, and the last thing you want to do – especially when it comes to your own children – is embarrass them or say something about other people so they think less of you or less of them, and in some ways the book kind of has that as a topic. If I come to a truth about some mistake I made, is this going to reflect badly on the entire family? Navigating that sort of becomes part of what the book is about.

When you’re writing in the first person, how do you manage to not come across as self-centered or narcissistic?

That’s a fair question. I try just to sound honest. There are a couple tricks that nonfiction writers can use to avoid sounding like they’re just narcissistic, and one is self-deprecation. You’re aware of your own flaws and shortcomings, and I don’t think I would have written One Day You’ll Thank Me had I not had a pretty acute awareness of all the ways I was failing to live up to the task of a father. Even though a little of that, if I’m totally honest, is a little tongue-in-cheek because I don’t think I was a bad father, but I thought that the things that kept happening were really funny. So self-deprecation becomes a kind of device that a writer can use to avoid that tone of self-congratulation or narcissism.

And the other is plain honesty. I think that one of the reasons that narcissism bothers us is that it feels like a cover for something else. Something about it seems disingenuous, and if you really tell a sort of whole and unvarnished truth about yourself, you can’t really avoid talking about those things that are harder and darker. So I find that when I write with all of the honesty I can muster, you don’t really end up in narcissistic territory – you end up in the genuine territory.

I learned pretty early as a writer that as much as I felt like writing was something I was good at, I wasn’t good enough at it that I could just jump in and do it whenever I wanted without having a schedule. I think it’s easily likened to training for a really difficult athletic event or a marathon. I think a marathon is an apt analogy in a lot of ways. No matter how good of a runner you are or [how much] natural ability you have as a runner, you can’t just go out and win the marathon by running without having the training. You have to go out and train. It gets a lot easier to train if you have a schedule so that it becomes predictable.

My writing life and my professional life and pretty much all of my adult life has been co-terminus with having kids. I’ve never been able to write much at home; I’ve always had a very busy home. When I was in graduate school, I had this tiny, crappy apartment, so I didn’t have an office or room to write in. I’ve always gone to libraries, and to this day I go and I sit and I work at the library. I spend a lot of time sitting at the Lawrence library, tucked away in a back corner somewhere, just with my notebook or loose pieces of paper and a pen.

I can elaborate a little bit more about the process. I really like to work by hand because I find that computers are distracting …. Moreover, there’s something about computers that seems to sit there and say, “Make me into something good.” It becomes so easy to sit there and evaluate yourself and to think, “Am I doing what I’m supposed to be doing? Is this the right word?” And I find that’s a real impediment for getting words on the page. I’m much better if I just sit there and not worry about how everything looks on the page, how it’s going to look when it’s all printed out and ready for publication.

Everything I have ever published has been written longhand first – and not only once, but many, many times – and in the case of something like a book, I’ve written the whole thing by hand maybe six, seven, eight times – sometimes even more – because it’s how I make sure I’m really concentrating correctly.

That seems pretty unique. Is it?

I don’t know. On one hand, I think it kind of is becuse we’re so used to the computer now that it’s hard for us not to be on the computer. Many people that are my age or younger just grew up writing and thinking on computers.

It’s one of these things that goes back to when I was in college. There was a paper I was working on that I was just struggling with and I couln’t seem to make it work. I generated this really crappy draft and took it to my professor, and he and I sat there and talked about it. When I went home, in order to make sure I got everyting into the paper that I was trying to really express, I made myself sit and go through it line by line by hand. It worked and it became one of the best papers that I ever wrote in college.

I guess I’m just the kind of person that says if this is working I gotta keep doing it in exactly the same way and that’s what i did. It became something that I could rely on and kept going back to time and time agian.

I don’t think that it’s so unqiue, though. I spend a lot of time telling students and encouraging students to get away from the computer, to spend time thinking with a pen in their hands and let their mind work without the expectation of the computer.

The Wisconsin graphic artist Lynda Barry in her book about the creative process, she talks about how creativity is connected to the body and she talks about how the hand movement across the page helps fire the imagination. I’ve seen that to be true in my own life.

A piece of advice that I’ve heard about writing is that if you want to become a better writer, you have to be a reader. What piece of writing has had the most impact on the way you write?

I’ve taught myself how to write from reading books that I love really, really closely. I just have this obsessive personality that I can read a novel or a story or memoir or essay and sit with it and read it again and again and again until something in it starts to feel generative – it starts to generate language in me.

I have a really good story about this. There was a writer in Ohio – Dan Chaon – he wrote a book of stories that I just love called Among the Missing. I was in graduate school and I was struggling to get my own stories together and I was in this place where I thought maybe this isn’t going to work and maybe I’m not going to be a writer after all. My wife was pregnant with my first son and so I had this double fear that if this doesn’t work out I’ll be so broke and a father with no prospects and what am i going to do with myself?

I sat down with this book and as I read I found myself imagining my own stories. It wasn’t like I was imitating him as much as I felt something sort of awakening inside of me. Instead of breaking that process I just kept reading and reading and reading until I found the story that i thought was the closest to what I was imagining and I would just live with them, study them, inhabit them as much as i could until I saw my own story moving with the right momentum.

It must have been seven years later, the editor who would eventually end up publishing A Door within the Ocean had been the editor for Dan Chaon’s Among the Missing, and that really felt like kismet.

To get more information about the 2020 Hal Prize or to submit works of fiction, nonfiction, poetry or photography, go to www.thehalprize.com. Also check out the Feb. 26 episode of the Pulse Podcast, available now at doorcountypulse.com/podcast-introducing-the-8142-review.