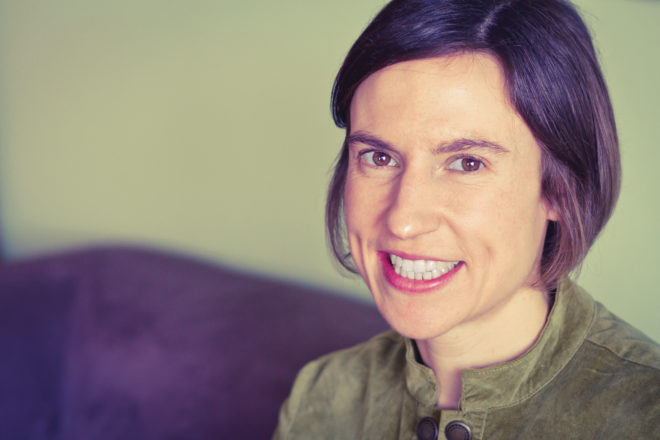 Nonfiction writers who submit to the Peninsula Pulse’s 2017 Hal Prize contest will have the chance for their creative works to pass before the eyes of well-known Wisconsin historian and author Erika Janik, this year’s nonfiction judge.

Janik is a familiar voice to dedicated Wisconsin Public Radio listeners. As the executive producer of Wisconsin Life, she travels the state in pursuit of humorous, surprising, emotional and thought-provoking stories of the people who call this place home.

She is also the author of six books, including Pistols and Petticoats: 175 Years of Lady Detectives in Fact and Fiction, A Short History of Wisconsin, and Odd Wisconsin.

I recently caught up with Erika to talk about her life as a storyteller, writing satire for “America’s Finest News Source,” (The Onion), and her best advice for budding writers.

For more information on the author, visit ErikaJanik.com. For details on the Hal Prize, visit thehalprize.com. Submission deadline for this year’s contest is May 1.

Alyssa Skiba (AS): When did you know you wanted to be a writer?

Erika Janik (EJ): I always really enjoyed telling stories and I always loved to read so I think it’s a combination of those two things. I liked figuring out other people’s stories, I liked sharing other people’s stories, I liked learning other people’s stories and so this kind of allows me a way to express my creativity, to get to know people I may not run across in my everyday life, get to know stories that are very different from my own. I also just had a lot of really great teachers when I was in school who were super encouraging and told me that I could do this, that I had potential and I should keep doing it. That goes a long way when you’re 14-15 years old.

AS: You mentioned that writing was never your plan, but history was.

EJ: I have always loved history; I can’t really remember a time when I didn’t. Again, that’s because of my teachers. I had some really great teachers who told us stories, that history’s not just names and dates and memorize it, it’s stories of real people and so we had our textbook but then they would tell us other things that weren’t in the book so it made it feel like this secret knowledge. I went to college for history, I went to graduate school for history and part of it was I just liked uncovering stories and I discovered that the kind of history I was interested in telling was women’s history. That’s still a lot of the stories I like to tell. I refer to it as “women in unexpected places” because I like coming across these women that I didn’t learn about, that weren’t in my books, that I didn’t know were doing these jobs or advocating or writing. I just never heard them and I want to share their stories and I want to get them out there. That’s still something that motivates me as a writer and as a historian.

AS: When did radio get thrown in the mix?

EJ: I actually just started as a volunteer at WPR [Wisconsin Public Radio]. I was working at the Wisconsin Historical Society doing a lot of writing on Wisconsin history and doing some stuff to help teachers teach Wisconsin history using primary sources and so I just started volunteering and they eventually hired me. When Wisconsin Life was created, part of what they were looking for was someone who knew how to put together and identify a good story, someone who was really curious, and someone who knew a lot about Wisconsin and they thought they could teach me how to push all the right buttons. That’s exactly what happened.

AS: I was surprised to see the satire “newspaper” The Onion on your resume. What did you do for them?

EJ: I actually did a number of different things for them. Some of the factual things that I did, they would have a local entertainment section and so I would do some of their short restaurant reviews. Other times we would take something kind of factual that was going on and then we would add a lot of satire to it. I did a variety of different things for them. That was actually one of the first places that I started writing and publishing just because they had this strong connection with Madison and I was here. That gave me a nice opportunity to work with a very talented and hilarious group of people. One of the editors used to say, when I returned some of my stuff sometimes, that it just needed to go through the smartass filter because sometimes I wasn’t smartass enough. I think it really helped loosen up my writing.

AS: You will be judging the nonfiction part of the Hal Prize. In your view, what makes a good nonfiction story?

EJ: I think that the principles of fiction and nonfiction in my mind are really very similar, that you have a narrative arc, that there’s a beginning, a middle and an end, that you go on some kind of journey, that there’s a character or characters that you can relate to, or maybe they’re extremely different from you but there’s that human element. That’s one of the things that I think a lot about when we’re doing Wisconsin Life is that I want people to hear people that sound like them as well as people they didn’t know lived in Wisconsin and I want them to understand maybe you wouldn’t do that but you can understand why that person would do that just by listening to them and telling their story.

AS: What’s the biggest challenge of nonfiction writing?

EJ: Sometimes what you want to happen, the evidence or the facts aren’t always there. You think that the stories going to go this way and then guess what? That’s not the way it worked. I think that’s one of the biggest challenges in nonfiction is that there is an element that you really can’t control. The story in some ways is the story it’s going to be and if you need it to rain, it’s not necessarily going to rain whereas in fiction I can make it rain tomorrow if I need it to.

AS: What’s your best advice for a budding writer?

EJ: Read a lot and ask a lot of questions. Be really curious about the world. I think you can find stories everywhere…there are amazing stories in the smallest of things and the smallest of places.