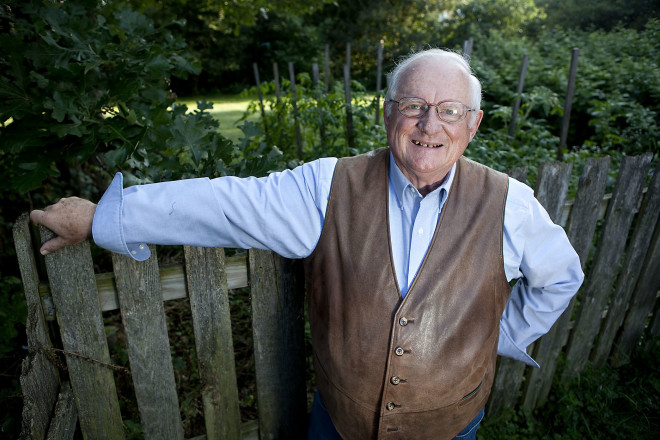 Nonfiction writers who submit to the Peninsula Pulse’s 2016 Hal Prize contest will have the chance for their creative works to pass before the eyes of well-known Wisconsin author, storyteller and historian Jerry Apps, this year’s nonfiction judge.

Apps has built a career on bringing his childhood stories and coming-of-age experiences to life through more than 35 books, many of which focus on rural history and country life. He is both a nonfiction and fiction writer who has won countless awards for his writings, worked extensively with the University of Wisconsin (he is currently professor emeritus at the UW), and has had numerous stories presented on Wisconsin Public Television and Wisconsin Public Radio.

I recently caught up with Jerry to talk about his writing career, what makes a good nonfiction story, and his tips for aspiring writers.

Alyssa Skiba (AS): When did you know you wanted to be a writer?

Jerry Apps (JA): I didn’t decide it, polio decided it for me because when I was in eighth grade, 12 years old, I came down with polio and the following year I was in high school, barely able to walk and couldn’t do any sports, couldn’t do anything. So one of my teachers in high school, this was Wild Rose High School, there were only a hundred of us in the entire high school at the time, suggested that I might take typewriting which baffled me completely but he knew what he was doing because the typewriting class was also the newspaper office. I was first a reporter on the school newspaper and then assistant editor then the editor. I was writing all the editorials and stealing all kinds of stuff from magazines. I didn’t know that I wasn’t supposed to do that (laughs). That’s how I got started, a very long time ago.

AS: What kinds of things did you want to write about?

JA: I didn’t know what I wanted to write about until much later but in those days with the newspaper, I can’t believe how open they were, the administration and the principal, they let me write whatever I wanted! I had this little tiny newspaper staff and we interviewed a bunch of students, so I was trying to write something that I thought students would be interested in and it seemed to work. It wasn’t until I was in the army, probably in 1956, right after the Korean War and I was a second lieutenant going through ROTC at Fort Eustis, Virginia, and there wasn’t a whole lot for second lieutenants or really for anybody else to do with the Korean War so I had a lot of free time and that’s when I began to think that maybe some of those experiences I had as a kid on the farm might be of interest to someone else. Also at that time I was getting over the fact that I didn’t want people to know that I had grown up under fairly humble circumstances. We had no electricity until I was in high school, I went to a one-room country school that had no electricity when I first started there, we heated our whole farmhouse with wood stoves, we milked cows by hand. I didn’t want the world to know that but I was in the army so I thought, ‘That’s kind of a foolish attitude. Maybe people might be interested in what some of that was all about.’ That’s when I got on the idea of writing those kinds of stories and I’ve been doing that ever since.

AS: You will be judging the nonfiction contest for the Hal Prize. What makes a good nonfiction story?

JA: That’s a good question. I keep asking myself that. I teach creative writing, I’ve done it for 40-something years and I teach at The Clearing these days and I’ve been there for 25 years. This sounds maybe a little unusual but the first thing I say is don’t worry about trying to write like some famous writer. Just think about who you are and write for yourself, just write something that you think is going to be interesting to yourself. Start with that. I’m a strong advocate of short sentences, short words. Dump the impressive, flowery language; I’m fairly anti when it comes to those who want all kinds of adjectives and adverbs to impress me with. I try to be upfront and simple. Start with the ordinary and then make it extraordinary.

AS: How do you make it extraordinary?

JA: You make it extraordinary by having a story – the story is of essence to me, whether you’re writing fiction, nonfiction, memoir. It’s a story that captures people’s attention. What makes a story? Well a story has a beginning, a middle and an end. It sounds simplistic but it does. It also has people or it has characters who could be people, could be animals, could be the weather. Then something’s got to happen, you can’t just gush on about description; you’ve got to have some action to grab people in and for heaven’s sakes, you don’t give away the story in the first sentence or two but you capture people’s attention with the first sentence or two. If you don’t capture them with the first sentence or two, you’re lost! Character, action and suspense, a sense of place. I’m a strong advocate of wanting to know where something is happening, what it’s like there, what it’s been like there and fold your story into that sense of place so when people are reading the story, they are there; they are a part of what you are doing. It’s almost as if they are sitting at your elbow saying, “Yes, yes, yes,” as you spin this tale. Have an ending that brings this together.

AS: In your opinion, what is the single biggest challenge of nonfiction writing?

JA: To do it. Procrastination is the biggest problem I’ve seen with my students. The second thing is each of us has within us a creative self and a judgmental self, and we allow that judgmental self to rule with a very heavy hand. We write a sentence and then the judgmental self says, ‘That’s a terrible sentence! You’ve got to write it over again,’ so you never get anything done. Just write and if you have trouble with that judgmental self, just set a kitchen timer for five minutes and just write. Don’t stop. I do a lot of these timed exercises in my writing workshops and people are amazed what they come up with when the judge is not there. Also, discipline. I’ve been doing what I’m doing for 50 years and I sit down every day at my computer by 8:30 am and I spend about four hours at it. I do that every day. That’s how you get the job done.

AS: What is the most important part of your writing process?

JA: If you’re writing, set it aside and then come back to it. Spend some time rewriting. To me, rewriting is as important as that first draft is and essentially, you can’t rewrite what you haven’t written. The rewriting process is absolutely critical…I don’t care if it’s 750 words or 85,000 words, I spend as much time or more on the rewrite. Don’t hesitate to do some rewrite.