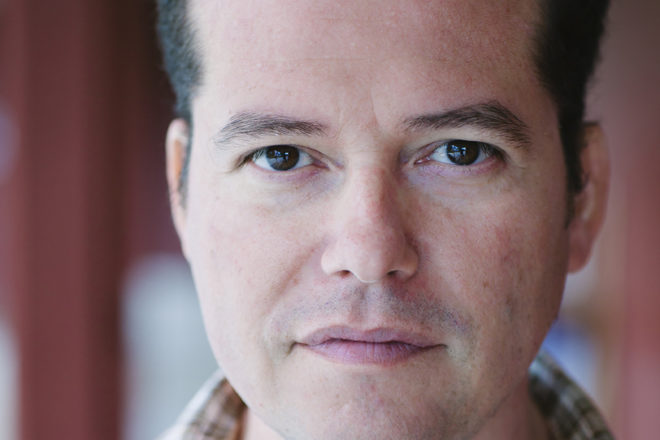 Mexico-born writer José Antonio Rodríguez got his literary start penning poetry, but it is nonfiction which he will judge in the Peninsula Pulse’s 2018 Hal Prize photo, poetry and prose contest.

Rodríguez is a native of Mexico who was raised in south Texas. A poet, memoirist and translator, his work has appeared in The New Yorker, IthacaLit and POETRY, among others. He is also part of the collaborative work Borderlines: Drawing Border Lives, a collection of artwork by Reefka Schneider, poems in English by Steven Schneider, and Rodríguez’s Spanish translations. 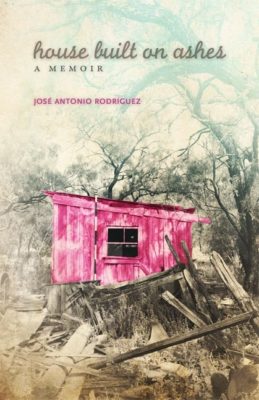 His memoir, House Built on Ashes, was published last February as part of the University of Oklahoma Press’s Chicana and Chicano Visions of the Américas Series. Through Rodriguez’s poignant and lyrical prose, House Built on Ashes explores his childhood memories growing up in poverty in Mexico and immigrating into the U.S. The story “contemplates the promises, limitations, and contradictions of the American Dream” and evokes larger political, cultural and social realities. The memoir was named a finalist in the 2017 International Latino Book Awards.

I recently spoke with José to talk about his writing career, being part of two distinct literary communities, and what makes a good nonfiction story. For more on Rodriguez’s work, visit jarodriguez.org. For details on entering The Hal Prize, visit thehalprize.com.

Alyssa Skiba (AS):  You describe your arrival at professional writing in your mid-20s to be “later than most.” Why, after graduating from college, did you decide to pursue writing as a career?

José Rodriguez (JR):  As an adolescent I just couldn’t bring myself to believe that I could be a writer. I grew up believing literature was something to be appreciated and loved but something very foreign to me so there was that disconnect between me and the work of art. That’s why it took longer for me to finally embrace the dream, the possibility that I could do that, that I could publish, that I could put my work out there. Part of it is that I grew up in a world that’s so distant from the kind of literature that I read. I loved The Scarlet Letter, The Catcher in the Rye, A Separate Peace, Charles Dickens’ work. It was worlds that were very far away from south Texas and of lives that seemed very different than the people I knew.

AS:  You went from not believing you could be a writer to publishing the most revealing type of writing with your memoir, House Built on Ashes. What did you have to overcome to gain the confidence to share your story with the world?

JR:  I grew up feeling very invisible in my community. I grew up very poor and an immigrant in the rough part of town, in the closet, so even at home I felt like a minority or I felt not fully at home. There was always that kind of sense of living at the margins, so literature felt like this beautiful space where life could be explored and big ideas could be revealed and themes could be asserted by the author. Writing was a way for me to have me be heard, to find my voice. Then I went to graduate school for my PhD and I took a great many courses and I read a lot both in creative writing and literary analysis and cultural theory and I began to make a lot of these connections between what I was reading and my personal experience. I began to develop a language to articulate what I had experienced in my life and the people of south Texas living on the border with Mexico. Then I think I realized my personal experiences might have something to say about larger issues; they might not be completely unique to me or to the people necessarily of south Texas. There might be some larger themes here that are at work that I have a personal experience or connection with. I began to understand my story might be worth sharing.

AS:  Immigration has dominated national conversations in the U.S. for years. How does that reflect on the Latino literary community?

AS:  Aside from being Latino, you are also part of another distinct and often underrepresented literary community, that being LGBTQ. Do you think LGBTQ writers are being heard?

JR:  I think more important than LGBTQ writers is writing with LGBTQ context. That’s where more of my concern lies because, again, institutions of power teach us how to be, in essence, and the education system is an institution of power so you want to bring in diverse voices and diverse content to the students and to validate lives and to validate experience. I think we’re headed in the right direction. We’re being more mindful of including LGBTQ content in syllabi and classrooms, and I hope we do more of that…Literature is a reflection of culture. Literature informs culture but literature is also informed by culture, it’s a product of culture. It’s on a loop because it also informs the culture from which it rises. It’s important to reflect that.

AS:  In your view, what makes a good nonfiction story?

AS:  If you could say something to your younger self – the boy who didn’t believe he could be a writer – what would that be?

JR:  Your life is worthy of literature. There is literature out there that does explore the lives of people you know or your community or something closer to your sense of community. Go find those books. Love the books you’re assigned, explore them, value them and then go find more. Go to the library. Go online. Hold on and nurture that love. It is important whether we end up becoming writers or not. The act of writing and the act of creative writing is a great way of exploring our lives and adding meaning to our lives.